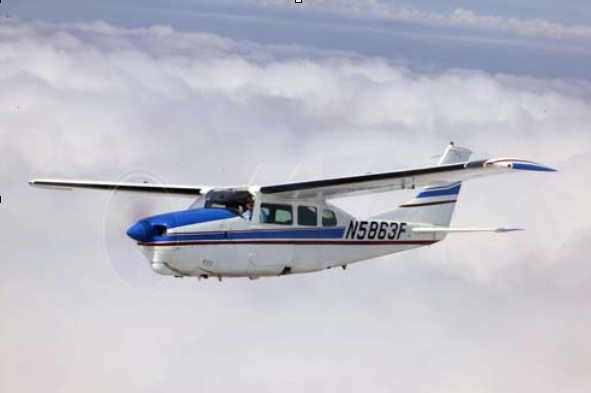 This short article explores whether the accident rate, or a type of accident becomes more prevalent, as the capability of a SE piston aircraft increases. Capability in this context would mean improved service ceiling, cruising speed, range and useful load.

Accident statistics were taken from the NTSB database in the USA for the ten years from January 2000. Only two aircraft types were selected: the fixed gear Cessna 182, and the retractable Cessna 210. In addition accidents were filtered for US only, this results in a more thorough investigation by the NTSB, and excludes to some extent bush flying operations, but not within the USA, eg Alaska.

An average annual usage of 100 hours was used, which is slightly lower than the 117 hours used by the FAA.

It is not possible to estimate hours under IMC, but for context, air transport exposure in phases of flight is: take off 1%; initial climb 1%; climb 14%; cruise 57%; descent 11%; initial approach 12%; final approach 3% and landing 1% (Boeing). As turbine equipment is most efficient close to their service ceiling, with a safety margin for buffet onset, it is likely that SEP aircraft have a higher exposure to cruise operations, outside the training environment.

20% of fatal accidents for large turbines occur on take off and initial climb; and 36% occur on final approach and landing. These statistics are for Class A turbine air transport with a MGW in excess of 60,000 lbs excluding military operation. Only 8% of fatal accidents occur in cruise for this category of aircraft.

Class A operations require significant safety margins, if an event has a probability above 1 in 1 million. As a consequence Part 121 revenue operations in the USA, typically have an accident rate of 1.5 per million hours, with fatal accidents a small fraction of these.

The Approach and Landing Accident Reduction programme of the Flight Safety Foundation (ALAR) calibrates risk for different types of approaches. Non precision approaches at night in IMC in mountainous terrain are amongst the highest risk operations.

Both types are available with turbo charged engines, and this option was popular for the 210.

The 210 is regarded as a workhorse, and a significant proportion are turbocharged, and in some cases pressurised – as a consequence the 210 is likely to have a higher exposure to both high altitude operations, and weather.

The 182 for the purposes of this article is the fixed gear version. All 182 have wing struts.

The 210 started as a retractable version of the 182, but then evolved into a cantilever wing, six seat retractable.

Using the speed half way between stall speed and Vref we can derive an estimate for the kinetic energy at 90% of MGW for each type. Accident survivability is linked to kinetic energy. The 182 in a forced landing accident has approximately 1,000 Kilo joules of Ke to dissipate. The 210, by contrast has 7,200 Kilo joules to dissipate. The crash worthiness of the structures is similar, although the 182 with a fixed nose wheel connected to an engine mount may arguably have some higher crashworthiness protection, in addition to a much lower Ke on impact. 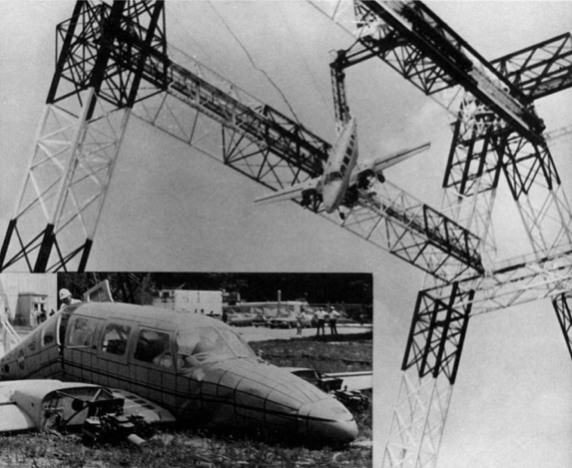 This photo is from NASA historic files, showing drop tests for a Navajo.

This probably understates the true rate per 100,000 hours, as we do not discriminate for the overall hourly exposure to IMC. On average, does an SEP spend 10% or 20%, or more, of its flying time in IMC? Would a more capable aircraft, like a 210, be expected to spend more time in IMC, and by how much? In the same vein some of the accidents were both at night, and in IMC.

IMC accident by type or phase of flight

Scud running. When investigating the 30 fatal accidents over the period for the 182 an interesting trend emerges. 17 of these accidents were VMC into IMC type accidents, where a VMC flight was continued into deteriorating conditions. In 14 out of these 17 accidents the pilot was either not IR rated, or current to exercise IR privileges.

Only six out of the 25 accidents were of this type for the 210, suggesting that a higher proportion of 210 pilots are IR rated. However an additional three accidents for the 210, low IR experience was cited as a factor.

This contrast would suggest that the 182 may be the first serious touring aircraft for their pilots, and that it is predominantly used in VFR operations, but given its ability to fly 500nm plus, it will encounter more weather. The 182 has good STOL characteristics so a better appreciation of precautionary landings would help address this accident trend. Also gaining instruments qualifications would reduce this risk.

CFIT Four accident for the 210 were of the controlled flight into terrain type, of which two were in the mountains. The 182 had two accidents of this type, one involving mountains.

Engine The Continental powered 182 is prone to carburettor icing (the 182 S and T is Lycoming fuel injected), however only one IMC fatal accident for the 182 had engine problem as a possible factor. Four of the accidents of the 210 were due to engine failures or problems. This higher proportion of engine problems may be due to a higher proportion of aircraft in the fleet with turbochargers, less knowledge of operating piston aircraft at higher altitudes, or insufficient maintenance budget.

A search for engine failure for both types shows 23 accidents/incidents for the 210, and 15 for the 182 for the period, this is for both VMC and IMC.

Some of the accidents in the case of the 182 were related to practice forced landings ending in a hard landing, or undershoot. Several 182 incidents were due to either fuel exhaustion, or carb ice (sometimes associated with long descents for parachuting operations) – a significant majority resulted in only minor or no injuries.

The picture for the 210 is more severe. 22 accidents had engine failure as a factor, of which 8  involved fatalities, four referred to above in IMC. Turbocharged engines were 15 out of the 22 engine related accidents.

The difference may be due to discrepancies when using ‘engine failure’ as a search item in the database, however it does suggest that high altitude operations with turbochargers may take a special toll on the longevity of the engine. Also pilots of the 182 appear to be more capable in carrying out a survivable forced landing following engine failure, possibly due to the lower stall speed and lighter weight.

The 182 is more similar to training aircraft such as the 172 in terms of carrying out forced landings. This may also be a factor in the better survivability than the experience of 210 pilots.

There does appear to be a contrast between the type of accidents for the two types. The 182 has a high proportion of VMC into IMC type accidents, suggesting that improved training in both instrument flying, and precautionary landings would improve the overall safety record considerably. One thesis is that the 182 operated by IR rated and current pilots, on an IFR flight plan does enjoy a superior safety record. Half the IMC related fatal accidents might be eliminated.

The high proportion of engine related incidents for the 210 vs the 182 merits some investigation – is it because a significant number of engine failures in the 182 have not resulted in a recordable incident?