Argentina was the first real vacation destination on our journey. It is one of the most developed countries in South America and we speak the language, so we hoped for a few more relaxed weeks than we had previously. 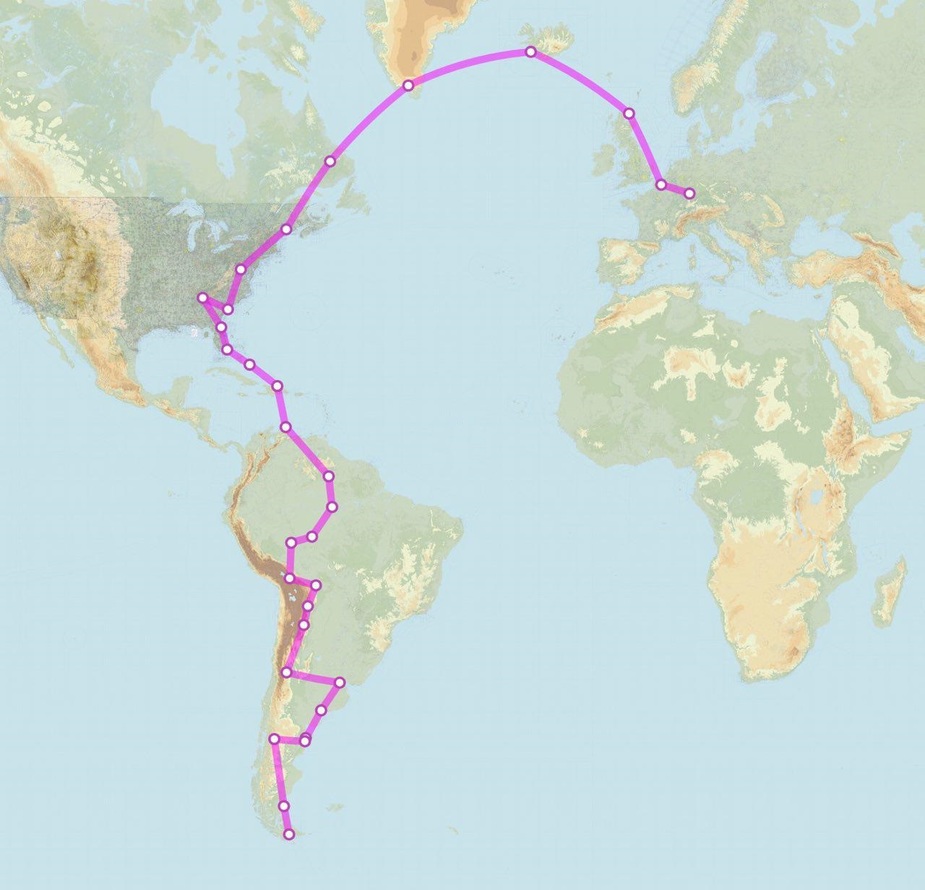 Our route to the end of the world

Argentina is huge. It’s the eighth largest county (by area) in the world. Even though it reaches only slightly north of the Tropic of Capricorn, the distance from its northern Corner to New York is only twice the distance to its southern tip near Ushuaia. A signpost close to the Bolivian border

As large as the country is, as large is the variety of landscapes that can be found in Argentina. It reaches from Andean high deserts in the northwest to sub-Antarctic islands in the south and everything in between. Salt lake in the Andean northwest DC 3 on display near Ushuaia in the very south

Flying in Argentina isn’t as easy as we had hoped for, as far as the paperwork is concerned. One has to fill out a sort of internal GenDec for each flight from a controlled airport, actually even two of them. After landing you have to show up in the ARO where crew and aircraft papers will be inspected. Staff is very friendly and usually apologizes for the inconvenience but nevertheless it takes quite a while. Fees are generally low and will sometimes even be waived. At other Airports we had to pay between 25€ and 50 cent. Even the 50 cent have to be paid by credit card what again can be very complicated. A flight plan is required for each flight, IFR as well as VFR.

ATC is friendly and helpful but away from the big airports not much English is spoken. We found it much easier to speak Spanish on the radio since we were south of Buenos Aires. It takes a while to get used to the dialect here – e.g. miles in Spanish (millas) is pronounced meeyas here they say meeshas

VHF contact might get lost enroute and there is no radar away from the terminals, so controllers ask for position reports and estimates.

Fuel is affordable at about 1.20€ per liter. Paying for it can again be an administrative nightmare of at least half an hour. Handling is not required. The only exception was Mendoza (SAME) where we needed a bus to get to the aircraft.

All of this may sound negative, but actually flying here was an extremely positive experience. We have always been treated very respectfully and friendly by everybody. Police, military (who run the ARO and possibly ATC in a few places), and everybody else we had to deal with was really nice at all times and nobody took the processes too serious.

The best part, however, were fellow pilots. Argentina has a small but vibrant GA scene, both with private owners and clubs. We found an incredible amount of hospitality here. We were invited to an Asado (Argentine grill party) and found shelter in private and club hangars for free several times. 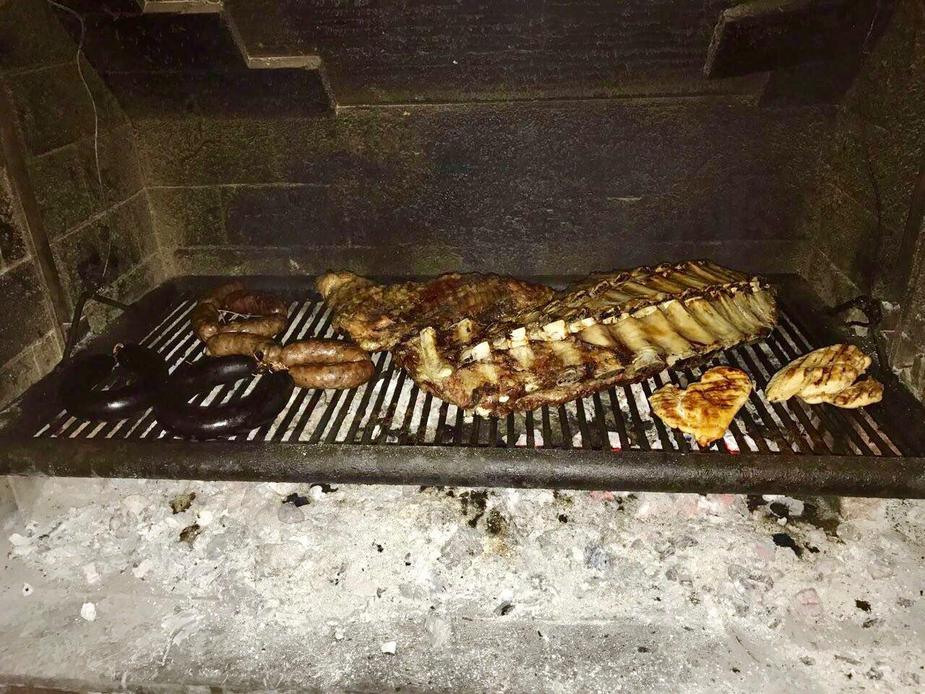 We had been to Argentina a couple of times before, so we knew quite a few places already. We chose the destinations of our current trip in part because we hadn’t been there before, in part because we liked them during previous trips and in part because of practical constraints. The resulting route was Salta (SASA) – Mendoza (SAME) – San Fernando (SADF) for Buenos Aires – Bahia Blanca Aero Club (ZZZZ) – Puerto Madryn (SAVY) – Trelew (SAVT), fuel only – Esquel (SAVE) – Rio Gallegos (SAWG), fuel only – Ushuaia (SAWH).

Apart from what I already wrote about the immigration procedure in Salta, there is nothing to tell with respect to flying. Salta is one of the main tourist magnets in Argentina. It’s really a lovely city we had visited previously but the main draw is the surrounding landscape. Here we took a cheap rental car and drove around the mountains for a few days. Between Salta and Cafayate

Mendoza, our next stop, also ranks high on the popularity list of most tourists. It’s located in a dry area (most of the year), surrounded by irrigated vineyards with the high Andes in the background. This was the only place where we had to park the aircraft inconveniently on the main ramp and we needed to take the apron bus to get there. This service costs almost 50€ per ride and we needed it six times, because you are not allowed to taxi to the fuel station after landing before reporting in the ARO. Luckily they billed us only two

Mendoza is the best regarded wine region in Argentina and most people come here to visit some of the wineries and do some tastings. We did that as well, of course. Wine tasting in a vineyard near Mendoza

After all that flying at high altitude our oxygen pressure started to get low so we were looking for a refill. San Fernando (SADF), Buenos Aires’ GA airfield is supposedly the only place in Argentina where this is possible, so this was our next destination. Buenos Aires is a vibrant metropolis and quite interesting but we would probably have skipped it this time without the need for oxygen. Getting oxygen turned out to be quite difficult, as the FBO which offered the service was not very experienced with it. Actually it appeared as if they had never filled up an oxygen tank before. It took the better part of a day till they found the right fitting and had finally filled up our tank. The FBO asked for a “ramp fee” of 100US$ but this included washing the aircraft and three nights in their hangar. Buenos Aires from the air

Our next stop was the nicest one. We had been in contact with Argentine fellow Mooney pilots via the internet before and one of them had invited us to visit him and his Aero Club in Bahia Blanca. The Club has its own little air field out of town. Our Mooney could stay in our friend’s hangar for a few days, we had a great time with other pilots and could even do an oil change. Again we took a rental car and drove over to a small mountain range called Sierra de la Ventana. Our Argentinean friend and Mrs. terbang getting their hands dirty

One natural marvel on the coast of Argentina is peninsula Valdez, famous for whales, penguins and sea elephants. It is reachable from Puerto Madryn (SAVY), where we flew next. It turned out very sleepy regional airport with only one scheduled flight per day. Again we could stay with the local Aero Club. No fuel but no fees either. Peninsula Valdez from the air

You can book tours from the town of Puerto Madryn taking you to the peninsula. Not cheap, but really worth it. They take you to various spots to where wild life can be seen. Sea elephant, only one alpha male allowed per beach (in sharp contrast to aviation forums) The tour is concluded by a little hike through a penguin colony. Orcas (killer whales) patrol the beach, waiting for the penguins to leave the shore. After so much seaside we headed for the mountains again. A fuel stop in Trelew (SAVT) was very relaxed, no landing or other fees had to be paid. Our destination was Esquel (SAVE). Once more this turned out to be a sleepy but exceptionally friendly airport with one 737 per day arriving from Buenos Aires. We could stay in the aero club’s hangar for a week free of charge. Short final in Esquel (SAVE)

There are several national parks we hadn’t visited before in the area. We rented a car and were quite lucky with the weather for a few days. It was spring time here, but quite early. Unfortunately none of the hikes we were interested in was accessible yet. Only a few shorter ones in Parque National los Alerces were possible. I didn’t include many airborne pictures from Argentina so far because it was either clouded or boring, but this was to change on our way to Ushuaia, which was our next and final destination in Argentina. The first leg of the day took us to Rio Gallegos to get fuel. It was very bumpy with heavy up and down drafts up to FL130. Later we had to climb to FL190 to stay on top, wasting our precious oxygen. Rio Gallegos was extremely relaxed again, but it was one of the airports where we had to pay a fee of around 50 cent. Tierra del Fuego is a sub-Antarctic island south of the mainland. It’s flat to the east but mountainous to the west and south. And it’s famous for its poor weather. The day we arrived was a rare exception. Mountains in the south of Tierra del Fuego

ATC ordered us to fly at FL140 and we weren’t allowed to descend until shortly before we reached Ushuaia (SAWH), situated on the northern shore of the Beagle Channel. We were offered a visual approach and the Beagle Channel is wide, so it was no problem to dive into it and avoid the procedure. An approach into Ushuaia in these conditions is a great experience, it was one of the highlights of our flying so far. Visual approach 25 with the City in the background

Immigration police is not usually present at the airport in Ushuaia, so prior arrangement is necessary. It took a quite a few phone calls to find the right contact. However, once we had that, everything worked fine. Two friendly ladies appeared in time for our departure. No stamps were necessary but they had to scan our passports to update their database.