Ushuaia was the turning point, from there on we were headed north again. So Chile was the first country on our way home. 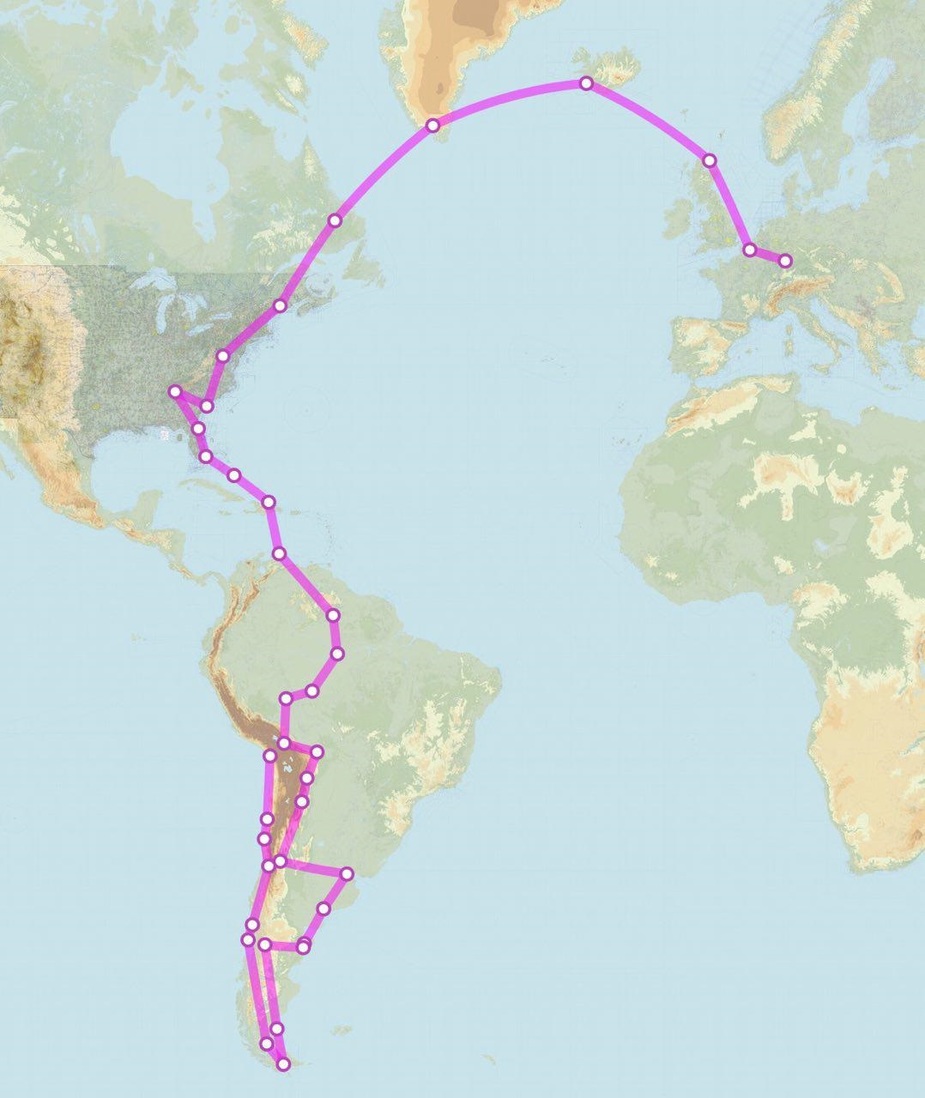 Our route to Arica (SCAR)

Chile is a long and narrow country. The GC distance between its southernmost airport SCGZ (near Ushuaia, Argentina) and the northernmost in Arica is 2200 NM. However, it’s squeezed between the Andes and the Pacific Ocean. Wherever you are in Chile, the shoreline and the western border are never more than a couple of miles away. In fact, the country is so narrow that the semi-circular rules apply between 271 and 90 degrees. There is no east-west flying in Chile.

Considering the vast north-south extension, it’s not surprising that all climatic zones from the sub-Antarctic steppe to the sub-Tropic desert can be found in Chile. However, the mountains and the sea are very dominant as they are always close by. Boats near Puerto Natales in the very south Landscape on the island of Chiloé, off the southern coast

Chile is an outdoor lovers’ paradise. There are numerous national parks all over the country, many of which are easily accessible. Landscape is often spectacular and the less crowded ones allow dispersed camping wherever you like. Sometimes you can walk for days without meeting other hikers. Especially the landscape in southern central Chile, the Sur Chico (little south) is very impressive. It’s called the Chilean lakes district. But not only are there a lot of lakes, moreover there are many volcanoes dotting the area. Lago Llanquihue and Volcán Osorno in the background The capital of Santiago de Chile and the metropolitan area split the country in South and North. It’s probably the most European capital in South America. The further north one travels, the dryer it gets. While agriculture is still possible a little north of Santiago, the Atacama desert that covers the northern quarter of Chile is one of the driest places on Earth. Vines in the Elqui Valley Oasis in the Atacama desert near Arica in the very north

Flying-wise Chile was finally the paradise we had hoped for. A simple online form had to be submitted to get permission to enter the country. On arrival we had to pay an entry fee of about 25€ and from there on no other fees applied. We didn’t pay a cent for landing or parking after that! Flight plans can be filed via RR again. Some of the airports wanted us to fill in a form with our names before a flight, others didn’t care. Showing our licenses was sufficient to get access to the ramp. At least in the Santiago area ATC speaks English, we used Spanish in other places. Chileans speak rapidly and often omit the last character of a word but controllers usually tried to be a little considerate. There is radar coverage all over the country and VHF contact is rarely lost. Everything is well organized, friendly and works efficiently. Avgas is available in many places and costs between 1.30€ and 1.40€ per liter. It can be paid by credit card in a matter of minutes. What a difference to Argentina.

As different the official side was from Argentina, as different was the personal one. In Argentina we found it easy to get contact to local pilots. Many of them went out of their way to help us. In Chile nobody cared. We contacted a few aeroclubs by mail or fb, but they didn’t even reply. In some places the aeroclubs sell the Avgas but again, nobody was interested in any contact.

Again this was by far not our first visit to Chile, so we chose the destinations for this trip in part because we hadn’t been there, in part because we liked them on previous trips and in part for practical reasons. The resulting route was Punta Arenas (SCCI) – Chiloé (SCPQ) – Osorno (SCJO) – Santiago (SCTB) – La Serena (SCSE) – Copiapó (SCAT) – Arica (SCAR). Tierra del Fuego on the way to Punta Arenas

We arrived in Punta Arenas on what we thought was a windy day. We learned that 25G35KT has to be considered benign. 40G50KT was the order during the few days we stayed. Luckily there are three runways to choose from, so it’s not that bad. After landing we parked on the ramp and went to the ARO and the guy there was very helpful. He sent us to immigration police first, then to the sanitary service and finally to customs. The customs guy was completely unsure what to do with us. He phoned somebody who was in the know apparently and then had a quick look at our backpacks. He didn’t bother to inspect the aircraft, he created and stamped a form that admits the plane to be in the country for ninety days and gave it to us. Finally we had to pay the 25€ at an administration office and everything was fine. We refueled and were allocated a spot behind a hangar were there was at least a little shelter from the wind.

There is a national park in the area where we once did a little two day hike about ten years ago and we thought about going there again. However, it turned out that it is the most popular park in Chile and you have to book campsites months in advance. Anyway, it was too early in the season and very cold. So we decided to fly up to the island of Chiloé and this turned out to be a nerve-wracking flight. After departure from Punta Arenas

There were clouds but freezing level was a few thousand feet above the ground, so we thought there was a way out. However, it was very windy and we had to fight up- and downdrafts even at FL180 which we reached without ice. We were in IMC and OAT was -20C but we began to collect ice. We requested and were granted FL220 but it was hard to climb because of the downdrafts which only allowed for an anemic climb even at full throttle. I had to hand-fly and in IMC this was already stressful, but then we noticed that oil pressure had dropped to the end of the yellow arc (28PSI, green starts at 30PSI, red at 10PSI). Oil temperature went up but stayed in the green. We were very scared of course, no airport within 80NM. It was cold, we had grade 100 oil in and thought maybe that was the problem, but in retrospect this makes no sense. We reached 220 and after maybe five minutes more we broke out of the clouds and could even see the ground. There was a road in gliding distance to the right and we decided that we should descend to FL180 again. Shortly after reaching that, the oil pressure went back to its normal value of slightly below 50PSI. Shortly after the oil pressure event

We continued the flight as there were no good en-route alternates. Later we read out the engine data and it turned out that the oil pressure had dropped slowly within half a minute just in the moment I had increased RPM for the climb. We were unsure if we could continue but in Chiloé there is absolutely nothing and the following flights were low risk with many en-route alternates. We didn’t observe an oil consumption above normal level and my theory was that something had blocked the oil pressure relief valve, maybe a particle. We inspected the oil filter very thoroughly when we did an oil change a few flights later (see below), but there was absolutely nothing except for the usual small carbon particles which disintegrate when you rub them with your fingers. I thought about removing the oil pressure relief valve for inspection, but it is safety-wired to the accessory case and very hard to reach so I didn’t do it. We have about twelve hours since the event and everything is normal. We sent an oil sample to the lab as always, but don’t have the result yet. On the way to Chiloé

We hadn’t been to Chiloé before and it turned out to be a really nice place. We rented a car and drove around the island for a few days. The countryside as well as the small towns were really lovely. Houses on stilts in Castro, Chiloé

The island is famous for its wooden churches. A few of them have made it to the UNESCO world heritage list. Our next stop was Osorno in the southern part of Chile’s lake district which we also hadn’t visited before. On the way to Osorno

Weather was good and we had a few wonderful days for hiking and visiting several national parks. The lakes are surrounded by small towns founded by German settlers. The German style houses make a funny contrast to the volcanoes in the background. Mrs. terbang on a hike

We had been to the capital of Santiago a couple of times before, but it’s a pleasant city so we flew there next. Leaving the lakes district for Santiago

We landed at SCTB, a GA field close to the center of the city. It is operated by the Aero Club of Santiago and resembles a country club. There is a fine restaurant on site, tennis courts and a huge swimming pool. A lot of full-time staff in corporate shirts was around, but again nobody was interested in two pilots from Europe, but at least there were no fees. We spent a day in the city and had dinner in a restaurant we like a lot and which we knew from previous visits. However, two nights were enough and we continued to La Serena. In La Serena we had organized to do the oil change mentioned above. It worked out fine. Directly after landing we were greeted by three guys in high vis and pulled into an open hangar. We changed the oil in no time and I visually inspected the engine once the cowling was off. I found nothing I didn’t like.

La Serena is a beach-front town and nice for a day but the Pacific is very cold and the surf is huge, so it’s not good for swimming. Inland from town there is a valley where grapes are grown. They are not used for wine (well, in the first step they are), but for Chile’s national drink, the grape brandy Pisco. Distilleries can be visited and their products tasted. Mine seen on the way to Copiapó

Our next stop was Copiapó in the Atacama desert. The airport’s official name even is Desierto de Atacama. The town is nothing special but the surrounding desert landscape is spectacular. Our final stop in Chile was Arica on the Peruvian border which again is a desert town. We took a rental car again and visited the hinterland for three days. There are a few remote villages only reachable on gravel roads where some colonial churches remain. We had to extend our stay in Arica by two days as it proved to be very hard to get the permit to fly to Peru.