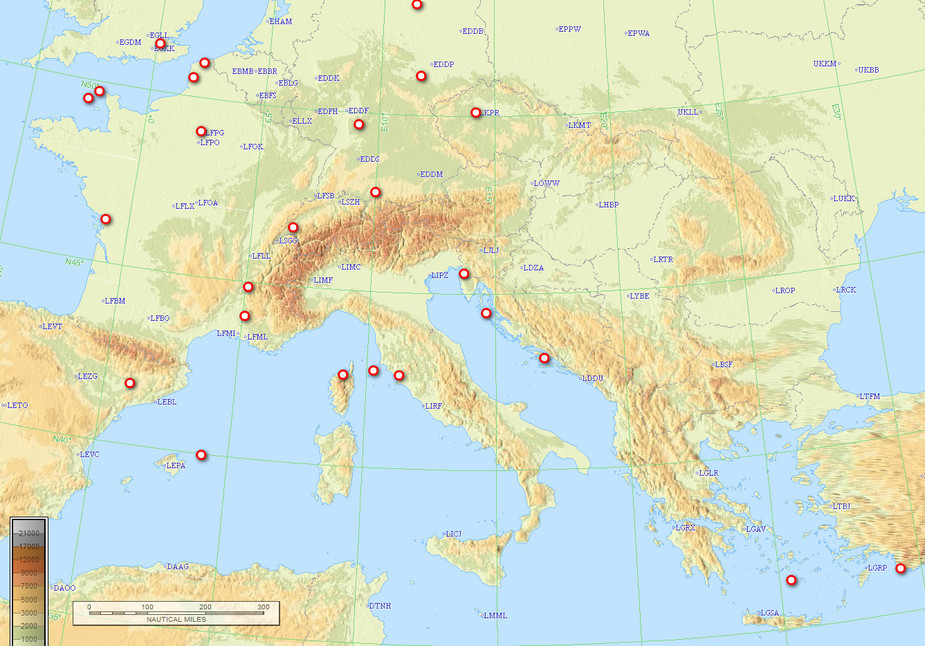 The one at the very top is Malmo which is off the map.

What about attenadance? wondering if coastal cities or islands have more show up sucess?

Greece is clearly an outlier !

The most attended ones were

What also helps a lot is

From memory, the most attended were Mali Losinj (2014) which is just a great location, Carcassonne (2016) which also had a lot of organisation done mainly by Nestor, and Elba (Sep 2018) where we had help from African Eagle. These had 30 or so people.

Greece was just a one-off thing which I thought we should try once. We had about 15 there which was a lot more than I expected.

On the two “main” ones we do, May and September, we normally get 20+ people, and only really bad wx reduces this, to maybe 10.

You missed Hertelendy Castle in Hungary. Only three planes. But to complete your map, it‘s worth to mention it.

Yes and there was one at the far end of Poland…

Slightly tangential but are there any initial thoughts on where a Spring ’19 fly-in may be to? Looks like there is a gap in the map near Sicily

I am not sure if many would come to Sicily. For most, it is as far as Greece, and that’s before you get into the tricky avgas situation in southern Italy. Also, “easy by airline” destinations produce low turnouts.

Venice (San Nicolo) was one of the suggestions for May 2019. Need to look up the film festival dates again… someone posted them here recently.

Some countries are clearly missing so far, for example the entirety of the Benelux countries as well as Austria, all four of which would be rather easily accessible to most of us and hence should produce a solid turnout. But “easily reached” also seems to lower the turnout if Peter’s criteria are used.

I am very interested to meet you all,but i am VFR only,so that’s a limit.

Rallye
LFDU, Switzerland
11 Posts
This thread is locked. This means you can't add a response.
Sign in to add your message