Looked into the TB20 PIM, this forum and the www, but did not find any usable information.

What would be, on our GA plane, an “acceptable” IAS discrepancy between main and stby indicators ?

when crosschecking on takeoff at 50 IAS, i usually have 3 to 5 knots discrepancy between those instruments.

I was once asked to fly an MEP which was behaving very oddly. We did some GS triangles and determined that the IAS was out by about 9kts. I said that in my opinion the aircraft was not airworthy. Had we had an EFATO, real or practised, before we realised there was a problem, we might have died.

OK, it’s not quite such a big issue in an SEP, but why would you not get them checked and calibrated?

I have never seen a TB20 with two IAS indicators… what is the second one? Is there a second pitot tube, is it heated, etc? If it is heated, is there a second CB for it? If not heated, that could be your answer

Not my aircraft, so can’t get it checked.

Main indicator is G500
Second is standby, just on the left of it.

I don’t have the aircraft PIM at disposal, but looked through the ENAC documentation I have (ENAC is operating the same aircraft with same installation), and there is no description of the anemometric chain.
Can’t find online the G500 supplemental for the PIM.

I would suggest doing the three-headings TAS test, mentioned a few times e.g. here, to establish which of the two is right.

I suspect the original ASI will be right…

Maybe someone familiar with the G500 can post whether there is a calibration option on it. @garryiae or @wigglyamp may know.

(b) Each airspeed system must be calibrated in flight to determine the system error. The system error, including position error, but excluding the airspeed indicator instrument calibration error, may not exceed three percent of the calibrated airspeed or five knots, whichever is greater, throughout the following speed ranges:

(1) 1.3 VS1 to VMO/MMO or VNE, whichever is appropriate with flaps retracted.

These are design specs, and the highlighted text limits the difference between IAS and CAS for a perfectly working indicator – what does apply in maintenance?

For gliders in the BGA CAMO system, we use + or – 2 kts when checking ASI at every annual.


I suspect the original ASI will be right…

There is a field calibration procedure for the GDC74A which is the air data computer used with the G500 and G1000. However, it’s only for re-calibrating the altitude if it fails the FAR 91 tests (Garmin document 190-00303-83 Rev D).

From personal experience with G500s, I would almost guarantee that any error will be in the original mechanical ASI that is retained as the standby instrument. Best check is to perform a full in-situ calibration of both instruments using a currently calibrated high resolution (probably digital ) air data test set and see what transpires.


For gliders in the BGA CAMO system, we use + or – 2 kts when checking ASI at every annual.

For the Garmin G500 system, the STC instructions for continuing airworthiness provide the following test requirements: 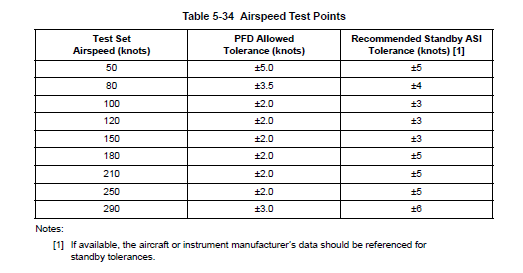 wigglyamp
Avionics geek.
Fairoaks. EGTF
10 Posts
This thread is locked. This means you can't add a response.
Sign in to add your message

"The milkbowl" and the most recent prang in the Irish Sea
GTN/SkyDemon Discrepancy (Warning: strictly for nerds)
Acceptable turbulence
Wasting aircraft range by not having a fuel totaliser