ADF and DME for IFR in Europe

I just had a conversation with an ATC controller I know from the Munich Centre. He told me that he is not aware of any DME that could not be used as a GPS Waypoint or an RNAV/GPS Approach that requires an ADF for the MA – in GERMANY (!).

(Could anybody please give me an example for both of these cases? That would be very helpful.)

First of all it is illegal and the fine is up to 50 000€ within German airspace. Do you disagree with that?

I am not aware of DMEs with offset in Germany but that is completely besides the point. It is possible, it is very common throughout the world and there is nothing preventing German procedure designers from introducing an offset DME in the future. It will hit you when you expect it least. A DME cannot generally be substituted by GPS.

How would “in Germany” be relevant?

Niederstetten ETHN ILS/LOC 25. In the MA you have to intercept an NDB. Legally this is not allowed without having an ADF on board.

First of all it is illegal and the fine is up to 50 000€ within German airspace. Do you disagree with that?

Can we please avoid this discussion? (Or do we want to extend it to all things “illegal”?)

Niederstetten ETHN ILS/LOC 25. In the MA you have to intercept an NDB.

Thank you very much!

Niederstetten ETHN ILS/LOC 25. In the MA you have to intercept an NDB.

I was asking for an RNAV/GPS IAP that requires an ADF. Is there something crazy like that?

He told me that he is not aware of any DME that could not be used as a GPS Waypoint or an RNAV/GPS Approach that requires an ADF for the MA – in GERMANY (!).

We have done this before. An example would be any approach where the DME is adjusted to read zero at the TDZ but is physically located elsewhere. What really matters, for the strict straight-in approach situation, is whether there is a GPS waypoint which represents the DME=0 point.

As regards legality, many/most SR22s have been flying IFR in Europe with no DME and no ADF and there are no known prosecutions, so either nobody cares or the CAAs know “something” and don’t want to test it in case they lose a test case (CAAs hate losing test cases because it busts a lot of stuff, affects training procedures, etc). But I think most people accept the “obvious” position that if an IAP contains an NDB and a DME (say) then you need to carry a working ADF and a working DME for the flight to be legal.

What you actually use to navigate is a separate issue. The regs are normally worded as “carry” rather than “use” and it would be only in an AOC scenario where a CAA approved operations manual would stipulate that (say) and NDB approach can be flown on the FMS (with optional synthetic glideslope, even) but requires a working NDB, working ADF, the NDB morse ident must test OK, etc. Private pilots are not subject to any of this (the IRT excepted, potentially) and it comes down to safety only.

I was asking for an RNAV/GPS IAP that requires an ADF. Is there something crazy like that? 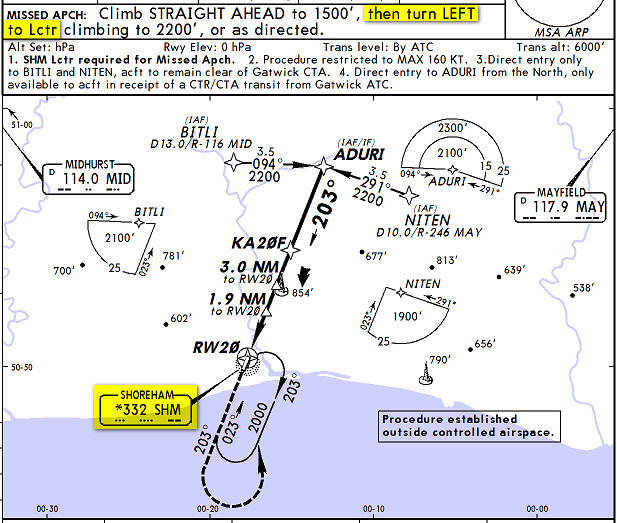 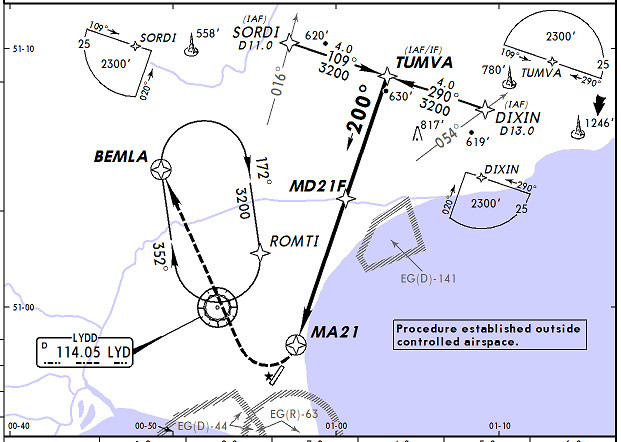 Nobody knows how EGMD managed to achieve this. The CAA takes the view that if your GPS failed, the NDB is there for the missed approach

Other relevant threads here and here

My plane would fly that hold automatically by WAAS GPS

DME / ADF substitution by GPS is not allowed in any EASA member state. I thought you didn’t want to discuss the legal aspects?

Maybe that makes sense, but it’s a little beyond me to have an RNAV/GPS approach that requires an ADF. They trust the GPS to get you down …, but not for the MA?
I guess I have a long way to go to understand some things, or the deeper meaning at least.

I know it now. Thank you. (how much can the fine be? Please say again)

Flyer59
31 Posts
This thread is locked. This means you can't add a response.
Sign in to add your message

Why are NDBs and an ADF required for RNAV approaches in Europe?
ADF and European Navigation
ADF required?
DME - any point in having one?