I have a question regarding A-UPRT.

Anyone know what type of aircraft is required for an ATO to be able to conduct this course? can it be any type of aerobatic airplanes.

My real question is can A-UPRT be done in an Annex I aircraft?? (for example Scottish Aviation bulldog).

It needs to be certified for aerobatics. Instead of paying a few thousand € for time in an Extra, do it in a C150. I don’t see a reason why Annex 1 should be a problem.

A different question but still about upset recovery.

In transport category aircraft, if you have an abnormal nose-high situation, instead of pushing down, you roll the aircraft on its side and apply rudder. AFAIU there are two reasons:

Should you do the same thing in light aircraft, or should you push.

This is what I was trained in recent years. Unload wings first, then roll wings level. 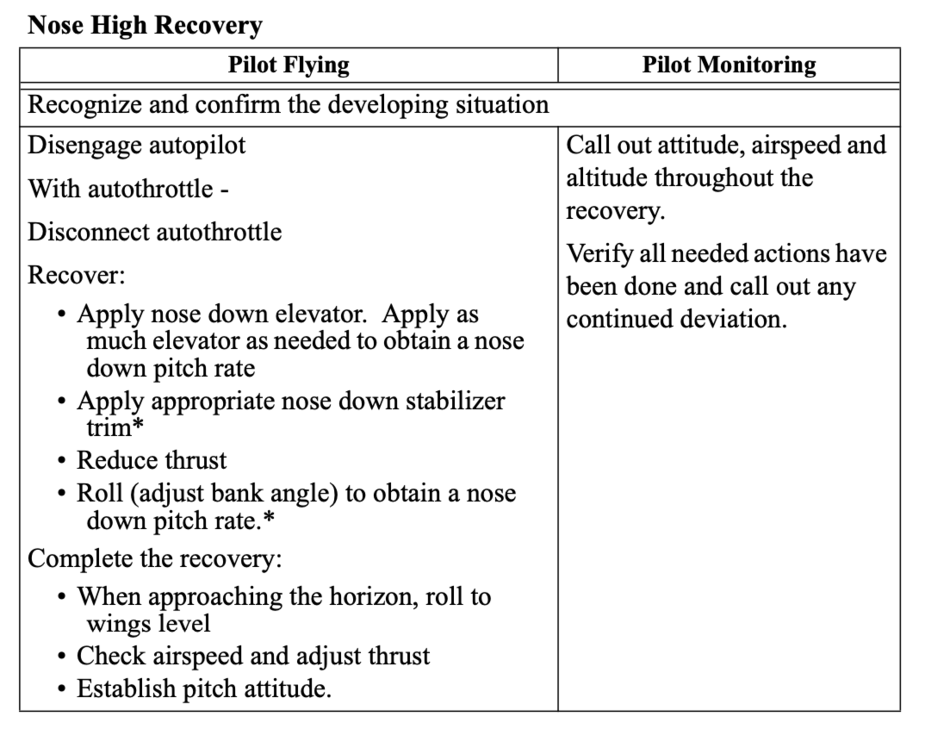 WARNING: * Excessive use of pitch trim or rudder can aggravate an upset, result in loss of control, or
result in high structural loads


A different question but still about upset recovery.

In transport category aircraft, if you have an abnormal nose-high situation, instead of pushing down, you roll the aircraft on its side and apply rudder. AFAIU there are two reasons:

It gets the nose down faster than pushing
It doesn’t risk negative g which could cause injury to passengers and cabin crew
Should you do the same thing in light aircraft, or should you push.

I was taught to recover from a high nose up in the T37 Tweet by rolling the wings first letting the nose drop rather than taking negative Gs or losing speed, 10 years later an instructor did me the same unusual attitude check in a glider with 50deg nose up, I started rolling the wings but he instantly took control, I understood later he was preparing me to simulated winch failures: I was supposed to push the stick rather than rolling the wings to drop the nose on the ground

Another element I think is that in most underpowered light aircrafts, at full power they will surely stall at 20deg nose up, I am not sure what is the threshold for “unusual attitudes” pitch in heavy aircrafts concerned by UPRT courses, my guess they can still +20deg pitch without even stalling under full power?

If that’s one of the goals then it would limit the kind of aircraft one can uses (Extra 200/300), of course if the goal is to demonstrate high pitch stalls a C152A will do the job although the emphasis is still “high AoA” rather than “unusual pitch” in PPL courses and they definitely don’t use ailerons to recover from those stalls…

PS: I would be less tempted to roll the wings 90deg in IMC from a high nose up

Aerobatics rating certainly can be done in an Annex 1 aircraft. I have done it. Although I’m not 100% sure it is “according to EASA”, or if it is in essence a national rating that is converted (on the fly so to speak) to an EASA rating. At least I got the EASA rating on my license. It’s the same with glider towing. Only nowadays you get only a national (aviation sport) glider tow rating, and you have to convert it separately to an EASA rating.


Aerobatics rating certainly can be done in an Annex 1 aircraft

Yes, Aerobatic rating can be done in non-EASA aircraft, I think even outside ATO scope, while I understand UPRT is an “approved ATO course”…

Honestly, I never understood what EASA was trying to solve with Aerobatics, Glider Tug ratings…if only they kept it a logbook thing


Should you do the same thing in light aircraft, or should you push.

They’re using Saab 91 Safir around here and I think that one is Annex 1.

Dimme
ESME, ESMS
17 Posts
This thread is locked. This means you can't add a response.
Sign in to add your message

UPRT (upset prevention and recovery training) aircraft needed ASAP for short term “dry lease”
Aerodynamic and upset training - not relevant to normal GA flying, and wake encounters
Why do ATPL students need to start on a SEP/MEP
PC-12 down in Milan Linate