@gallois the emphasis between old UPRT and A-UPRT has changed, and become more formalised.

There is now more CRM on case studies of LOC in swept wing airlines (usually AF447 plays a leading role in these studies), and the differences between a typical piston trainer and a swept wing multi crew jet with automatic flight control and, typically, underslung engines.

As a result A-UPRT doesn’t need to actually involve any real aerobatics. The aircraft type will explore accelerated stalls and incipient spins, so in effect a type with side by side cockpit, good visibility and benign spin characteristics would be ideal. A Grob 115 would be fine.

The old UPRT required evidence of resilience and situational awareness, hence a higher content of real aerobatic manoeuvres. In particular being able to enter and recover from a fully developed three turn spin. Also recovery from nose low and nose high, both positive and inverted.

No actual spin training in A-UPRT, except through possible mis handling of the incipient spin recovery. Unfortunately, some UPRT courses were rather expensive spurious tail chases in Extras, very expensive aerobatic trial lessons. Hence the need for more formalised regulation.

To add confusion the recovery actions on limited panel CPL unusual attitude are subtly different to A-UPRT. In reality UPRT should be carried out at the type rating stage in a simulator. Senior examiners view the current fashion for A-UPRT as a knee jerk and probably not useful, as you will have to unlearn what you did when converting to an airline type.

Thanks for that detailed explanation @RobertL18C. I did wonder why the DGAC had suddenly started to insist on Cap10 training for the CPL/IR training. (This is how I was understanding what ATOs and examiners were telling me and complaining about) I never had the urge to add the CPL to my licence so I never looked into it further or took much notice. I just did the recovery from unusual positions in twins, both in the aircraft or in simulators, the same as I do at each revalidation or when something new crops up.

I noticed this Robin 2160 for sale and while its nowhere near Europe a similar plane might be available closer to home. Although it’ll need an engine overhaul soon enough, this airframe is attractive given only 1571 TTAFE. I understand many others have lots of hours. 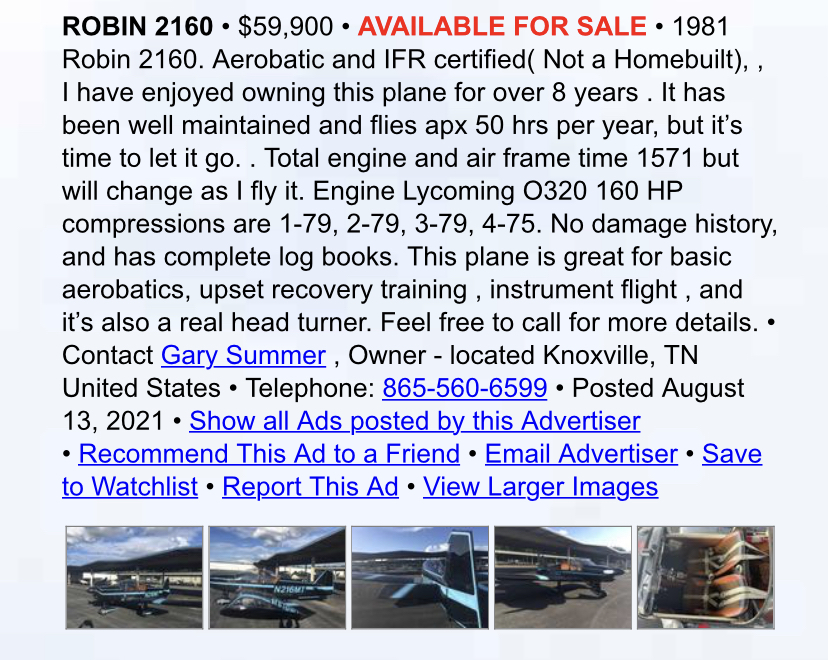 This appears to say that spare parts are available from France: “Alpha Aviation Holdings Limited in New Zealand continues to hold the type certificate. The STC for spare parts supply was re-acquired by CEAPR in France in 2017” (I have no idea what STC means in this instance versus PMA or whatever)

Silvaire
USA
33 Posts
This thread is locked. This means you can't add a response.
Sign in to add your message