Peter_Paul thank you. This one worked ! I am now the proud … recipient of a firm proposal to make all of the critical exhaust parts out of inconel.
Now waiting for one of my fellow Extra 400 owners with a grounded aircraft to volunteer sending his exhaust for reverse engineering
I would have done it in a heartbeat but the problem is mine is flying so well right now that I find it a shame to be grounded just for this!

Hi
I have mine right part now new and have the old one at home. I can give it for a copy in Inconel. Are here other Extra400 driver?

Update: the exhaust system is with Goodfabs in the UK for making a copy. It will then be thoroughly checked by a qualified A&P before installation.
Hopefully we will have the issue of weak/failing exhaust risers fixed once and for all.

I have a question to our engine gurus here:

Why are exhaust heat shields of aircraft engines made of riveted bits and pieces of stainless steel sheets as opposed to a tightly fitting soft coating of insulating material packed in high temperature metal sheet?
Is it only for the sake of being able to visually check for damage?

This seems to me a poor compromise: obviously such a basic solution is imperfect and leaves many gaps for heat to invade the engine compartment.
As a result, everything in there gets very hot and some stuff shows visible heat related damage (ignition wiring). Also, engines with no “cross flow” cylinder design have the intake and exhaust risers right next to each other and surely this causes inlet air to get even hotter?

Furthermore, the cabin pressurization system uses bleed air from the turbo, which is obviously physically central to the exhaust/intake ducting.
As a result it is difficult to run these cabin air ducts in such a way that they cannot be damaged by an exhaust leak.

A jet of exhaust gases (1600 F, about 900 C) will immediately cut through the SCEET and end up in the cabin, causing depressurization and a CO poisoning event which might go unnoticed as the crew is overwhelmed by the visible event: loss of cabin pressure…

In other words, I consider this is a life-threatening design flaw. I am really amazed that this made it through certification, both FAA and EASA ??

Looking at car racing technology, the exhaust is completely sealed in a custom crafted heat blanket and even the turbos have their jackets. This way, the heat from the exhaust lines (which typically glow bright red) does not so easily propagate and “bake” the whole lot.

This is an interesting debate.

I think it is “just” that in GA a lot of stuff is simply done badly. Why? Because it always has been done that way. The volumes are not high enough, and there aren’t enough crashes, to drive an improvement programme. Components used are mostly ex 1950s truck manufacturing. €1000 alternators which last a couple of years. Turbos whose wastegates seize up (and in Europe almost nobody understands them). Sure we have had turbo exhausts burning through wing spars (on twins) and causing the wing to come off, but it doesn’t happen all that often

The NTSB does a report, long after the victims are forgotten by most people, and usually nothing happens. A lot of it is to do with substandard materials e.g. stainless steel instead of inconel.

The certification system doesn’t address this because it’s always been done that way.

Some can be addressed with “illegal” mods e.g. replacing an exhaust with an inconel one – looks the same and nobody will spot it.

A good preflight is desirable but on most types one can’t see much.

One pilot I know lost his oil because a bracket came off (fatigue) and an oil hose touched the exhaust and eventually burnt through. There are lots of things like that under the cowling.

So let me put out another question:

Would you see any negative effect of replacing the factory heat shield setup which is a complicated riveted assembly of sheet metal bits and pieces with a custom made full surface jacket that has formula one grade insulation and a stainless steel skin?

It would obviously keep a lot more heat inside the exhaust and result in higher TIT. The Inconel tubing will take it easily, and I suppose everything else in the engine compartment will be grateful. I see the issue that one would not be able to lean as much as before if max TIT must remain the same.

But what else? Is the fact that visual inspection for cracks requires disassembly a major no go?

BTW, @flyingfish, it looks like in the next (i.e. October) edition of Pilot&Flugzeug there will be an article about the Extra400. (I am not involved). Maybe YOU are actually involved?

It would obviously keep a lot more heat inside the exhaust and result in higher TIT. The Inconel tubing will take it easily, and I suppose everything else in the engine compartment will be grateful. I see the issue that one would not be able to lean as much as before if max TIT must remain the same.

) but I would expect the exhaust system to require some cooling airflow during flight. Especially if you want it to last a long time.

@boscomantico this is really exciting! I wish they had contacted us (owners association). do you have any contacts there?
@Peter. Thanks. Indeed this was my concern:
In car racing applications, the logic is “keep as much energy as you can in the exhaust to drive the turbo”.
This is supposed to produce better efficiency. But

- this is not a race car
- turbo boost is very moderate (about +0.35 bar) and the TSIOL 550 engine does not have a critical altitude (or more correctly it is probably somewhere in the stratosphere), proving that exhaust gas energy is abundant. Therefore I can’t really see a benefit in sparing this energy by keeping exhaust gases as hot as possible. The excess is going to be wastegated anyway… Right?

So I am tending towards this kind of solution, plus some carefully ducted airflow between heat shield and exhaust :
https://www.thermotec.com/products/heat-shields-and-protection/stainless-steel-clamp-on-heat-shield

the real challenge is the vertical portion of the risers (the one that is bolted to the cylinders. This is uncomfortably close to the inlet risers and there is also the he spark plug cable that gets baked.
I need to find a way to reliably attach something that is removable for inspection of the exhaust… Conti used a clamp on the adjacent air inlet riser to support a partial heat shield.

Well, I am not an exhaust systems expert but I’ll add my .02:

It is evident that the exhaust system in turbocharged and turbonormalized (I’ll use TC for both) piston aircraft is one of their achiles’ heels and contributes significantly to frequent claims of lower reliability vs normally-aspirated (NA) aircraft, the other main one being the fact that the TC engine is run at higher power levels for a longer time than NA engines.

While, at low altitude, an aircraft’s

, at altitude, the pressure ratio of a TC aircraft’s compressor is close to 3 (UDP/MP of 35" with atmosphere at about 11" @ FL250) , which, in terms of pressure ratio is equivalent to a sea-level-engine with a very significant boost of +2bar or +60" . A similar pressure ratio is seen on the turbine-side if the turbocharger which gives an idea of the exhaust system pressure. In absolute terms still not much above 0.7 bar at altitude, but, compounded with the very high temperatures, definitely significant compared to under 0.1 bar pressure loss in a well-designed NA exhaust.

My experience is low exhaust system reliability has as much to do with maintenance as it has with design.

My experience is as well that an aircraft, and especially an aircraft’s engine, more so it TC’d, is the perfect analogy of the butterfly effect . ie, when you change something apparently small to mitigate one problem, it often causes all kinds of secondary problems that we did not think of , so it has to be done with utmost care.

When we acquired our turbocharged Cessna P210, there was evidence of some exhaust parts having been repaired/rewelded, some having been replaced with inconel, with several relevant entries in the past 250hrs spanning over 10 years. In fact, after we ferried it for 10 hours to our shop for repairs and mods , further cracks developed.

P210 exhausts seem to be prone to cracking and in fact there is an AD on them since cracks can have all of the above listed consequences. As discussed the type is not unique in this kind of problem.

What we found is that:

We had the exhaust rewelded, the EGT probes repositioned, worn/corroded attachment hardware replaced, turbocharger and wastegate attachments aligned so that they would not place any loads on the exhaust, and carefully reassembled everything using high-temperature antiseize, using progressive fastening and alignment ensuring minimal loads placed on the different parts of the system. Almost 200 hours later we are yet to see any new damage on the exhaust, and judging by previous records, we do a lot more high-altitude, high-power, high-EGT LOP flights (placing extra effort on the exhaust) than the previous owner…are we simply luckier?

As to design changes, any change in the temperature profile of the exhaust may place additional loads on it leading to cracking, so it must be done judiciously. I am more worried about radiation cooling than air cooling, which can’t be much in relative terms. On our aircraft, sensitive parts (hoses, wires, rubber mounts) are shielded with aluminum plates that do not change the exhaust’s heat profile. I would not have a problem adding a couple of plates here or there (mine are all OEM), but adding them around the exhaust…I would make sure there is some space between them and the exhaust, and that they are not likely to vibrate free and/or cause other damage. 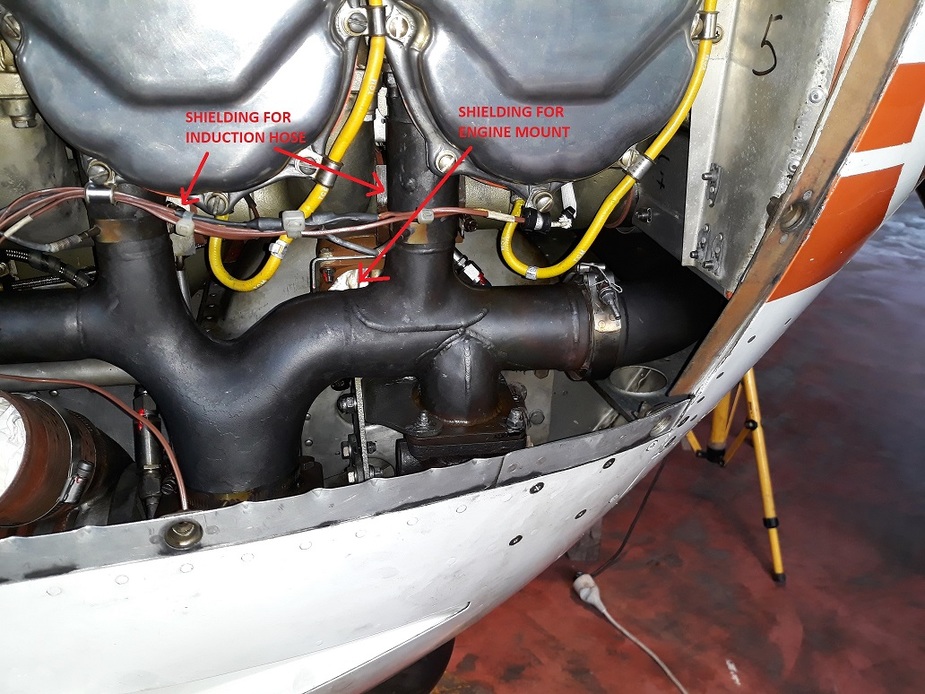 Antonio
Antonio
LESB, Spain
129 Posts
This thread is locked. This means you can't add a response.
Sign in to add your message