AN fittings in pitot/static pipework?

I wonder why these fittings are not widely used.

The resulting job is much better. For example this pic 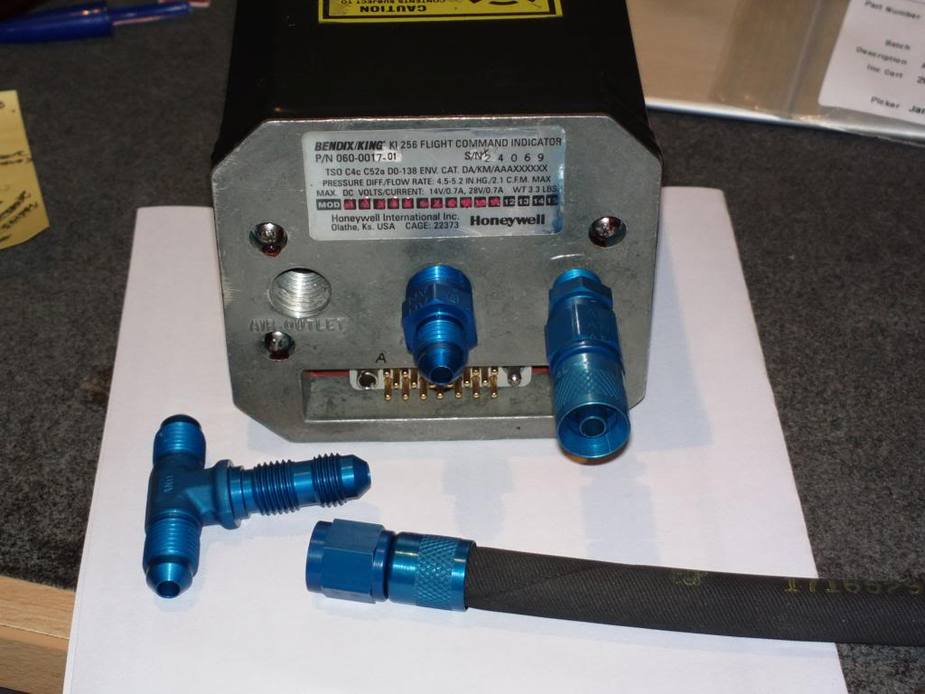 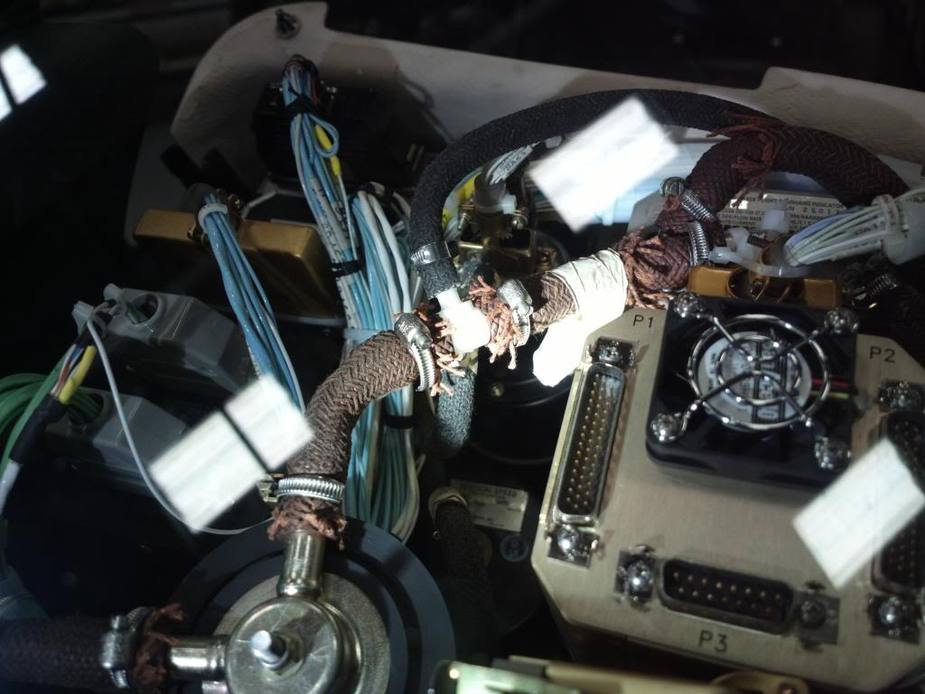 The prices of these are barely significant on the scale of aircraft maintenance so why do people do it cheaply?

Also extracting a vacuum instrument for maintenance, especially the 3-hose KI256 above, is a knuckle-skinning job.

I also don’t understand why manufacturers use the crappy hoses shown above. I suppose it is a tradition to use crappy hoses for pitot/static, with this kind of PVC hose 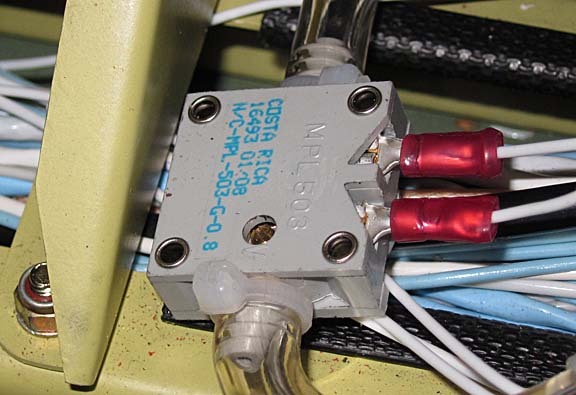 being installed by an EASA145/FAR145 company recently, as part of a £12k TCAS installation…

Get an RV! I’ve used dozens of them, and keep a fair few in stock. When ordering any small spares I usually over order by quite a few.

What about not being able to lockwire the fittings?

These fittings don’t have that limitation, but they are specified for a different type of hose – the 303 high pressure reinforced hose. The softer 306 hose has no “experimental” limit, so why do those fittings have such a limit, and no other fittings are offered for that hose? The 303 hose is way over the top for pitot and static lines.

PDF with a couple examples of wire locking:

I’d appreciate if you could send me the PDF, Norman. I can’t see enough detail in that pic. I can see that wirelocking a nut which doesn’t have wirelocking holes is possible – by tightening the wire around it tightly, in several turns. But my plane lives in a high-end turboprop maintenance shop and I have never seen this sort of thing done.

Could I recommend that you get hold of a copy of the FAA manual AC43-13, it contains many useful techniques for maintenance, including wire-locking and the AN fittings. By the way I don’t think you would be able to use anything else on the vacuum relief valve (see previous picture) other than a Jubilee clip or similar. If you ever get a chance to look at the back of a Scottish Aviation Bulldog’s instrument set-up, I’m sure you’ll understand how in the UK we followed a very rigid system of regulation for the installation; and probably why they cost so much!

Also be aware of over-tightening any fittings that have a tapered threads because will it no doubt split one or the other parts. Generally, tapered threads do not have to be wire-locked which does seem a little contrary to what you may think, especially as other joints in the system are locked. An example of damage caused by over-tightening is the Curtis valve that screws into the bottom of a PA28 fuel-tank – very often this will split the fitting in the tank.

I have AC43-13. My interest was specific to the areas where these quick-remove fittings can obviously be used – for example on the back of instruments.

Obviously if you have items with hose nipples on them then a jubilee clip is the only way to do that particular fitting.

Tapered fittings require a specific tightening torque. However in some cases the recommended torque is pretty high for the component – an example is the Floscan fuel flow transducer – and there one can back off a little and use PR1422 or a similar sealant to ensure a good seal is achieved. Tapered fittings won’t come out, but parallel thread ones potentially can.

Can you suggest, jxk, why the Aeroquip fittings above are for “experimental” use only?

It is a puzzle especially when I look at the absolutely crappy pitot and static tubing I see in aircraft undergoing maintenance (UK CAA approved), and the tubing in my 2002 TB20 isn’t much better, being made of rubber (guaranteed to perish) with that useless fabric covering.

It’s just from a cost point I suppose. These clear PVC hoses are easy to install, They seal good on tappered fittings, in cost less to make and install than the AN source.
I agree it looks ugly, but from a quality point of few, it is never been a problem on any of those aircraft I do avionics and pitot static on.

What often goes wrong (leaking).. Cessna white tubing, very good quality, if fastened by hand or short spanner. With a normal spanner they will be damaged by over tightning. When they leak, it’s 99,9% over tightning. Black rubber hoses such as used with ACK A-30 encoder are also very good.

On aircraft with aluminium lines, leakage caused by corrossion and breakage due to mis-alignment and vibration, over tightning and damaged fittings. These visually look quite good, while they quality isn’t that good.

Lines trough small channels, such as on Piper Cub, some times the interior strips are screwed into the lines or tubes, because It’s just impossible to see or keep the lines out of the way. Poor design in my opinion.

Socata hoses are difficult to asses visually. They always tend to look worn / old even when new, it’s just the design. On Socata static leakage does occures at the static drain, which is also a bit of poor design on some socata’s. Some have screw cap, which are ok if they are not over tightend, other caps push over the tapered drain are often cause for leakage.

That’s useful – many thanks.

The thing which brought me to look at this is – as you may guess from the photo at the top – the infamous KI256 which needs an overhaul every few years, or less if you are unlucky and the last OH was done by a cowboy. but the three hoses are a real mess and if they get shagged (or they look like they are, and as you say you can’t really tell because they always look shagged) then you have to change the whole length, and at least one of them goes back a long way. So a 5 minute swap job (I have a spare KI256) becomes several hours.

I quite fancy getting the whole lot replaced at the next Annual.

Out of interest, Jesse, do you do high-end avionics installs e.g. autopilots, GTN750 type of stuff?

A few of the companies I work for make their own hoses (with AN couplings). They do have a separate rating for making these hoses and testing them. I am not sure if that is required for making all hoses, or only pressure hoses). Could be that that is also a reason that they are not used often in GA.

Yes I also do autopilots and GTN-750, however most time spend is on avionics and pitot static testing, then installation and design of avionics.

Jesse
JP-Avionics
EHMZ
28 Posts
This thread is locked. This means you can't add a response.
Sign in to add your message