Believe it or not, a new island airfield is under construction in Greece.
Eventually it will be the airport of Anafi island just east of populous Santorini. 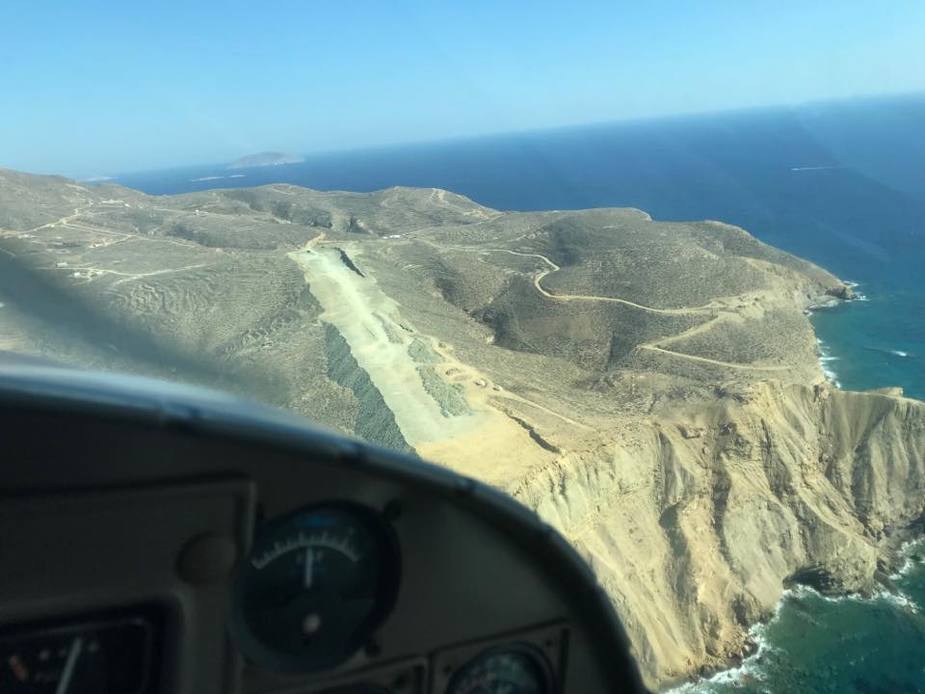 An album with some initial data can be found here:
http://hellasga.com/gallery/kyp/lgia
I’ll be updating it as progress comes along and me or friends get to fly above it for pictures.

Orientation looks like it will be a NW-SE runway. In summer the “Meltemi” wind picks up there in 340~010* / 15~G30 Kts figures.
One more challenging island clifftop approach, to be, for Greece.

Following local municipal pressures, in 2017 the Hellenic Army civil works corps took over the task to execute the airport construction.
The Minister of Deference holds a PPL(H).

The driving force was also a private funded medevac institution which operates a twin engine aircraft for this purpose in central Aegean islands.
It was always based in Santorini LGSR but with the advent of FRAPORT takeover of Santorini, the parking costs became prohibitive.
Nearby Anafi mayor seized the opportunity and stepped up the pressure for the island to get an airport for all the benefits it could offer to the society including the permanent parking of the medevac aircraft.

Off course politics and connections played their role but fingers crossed, for now, we have a new airport under construction progress.
The progress is slow but its moving.

Kalymnos LGKY (Greece’s youngest island municipal airport) took 20 years from inception (8/1986) to completion (8/2006)
Lets hope Anafi progresses faster. From the looks of it, it does.

Is there an easy way from Anafi to Santorini ?

Yes,by local boat.Dont plan anything soon for the new airfield…it can take 10 years to complete.

Wow! Will plan a fly-over, maybe drop some rose petals from the plane to encourage progress…

@WhiskeyPapa great !
If you manage to fly over Anafi works we’d appreciate an overhead picture to monitor progress !

We will be in LGIO this time next week. Keep us updated.

To me it looks like an already perfectly usable airfield

Yes it just needs a hair stylist, and coffee bar where you can sit all night having bought just one cup of coffee, and a Fraport office with a DSL line for wire transfers of 98% of all takings back to their head office

Not to mention the HCAA office with four H24 employees

No bitter talking please…wait and see,you will be pleasantly impressed !

MedFlyer
LGGG
10 Posts
This thread is locked. This means you can't add a response.
Sign in to add your message

Question for the Greek experts
Which UK (London area based) airfield to use on Friday
Departing Greece for Schengen Destination (Greece / Schengen issues)
Secrets of Greece?