Today, I got a letter from the Belgian ministry of finance by snail mail (literally, it took more than 2 weeks to arrive) accusing me of not having left them a General Declaration: 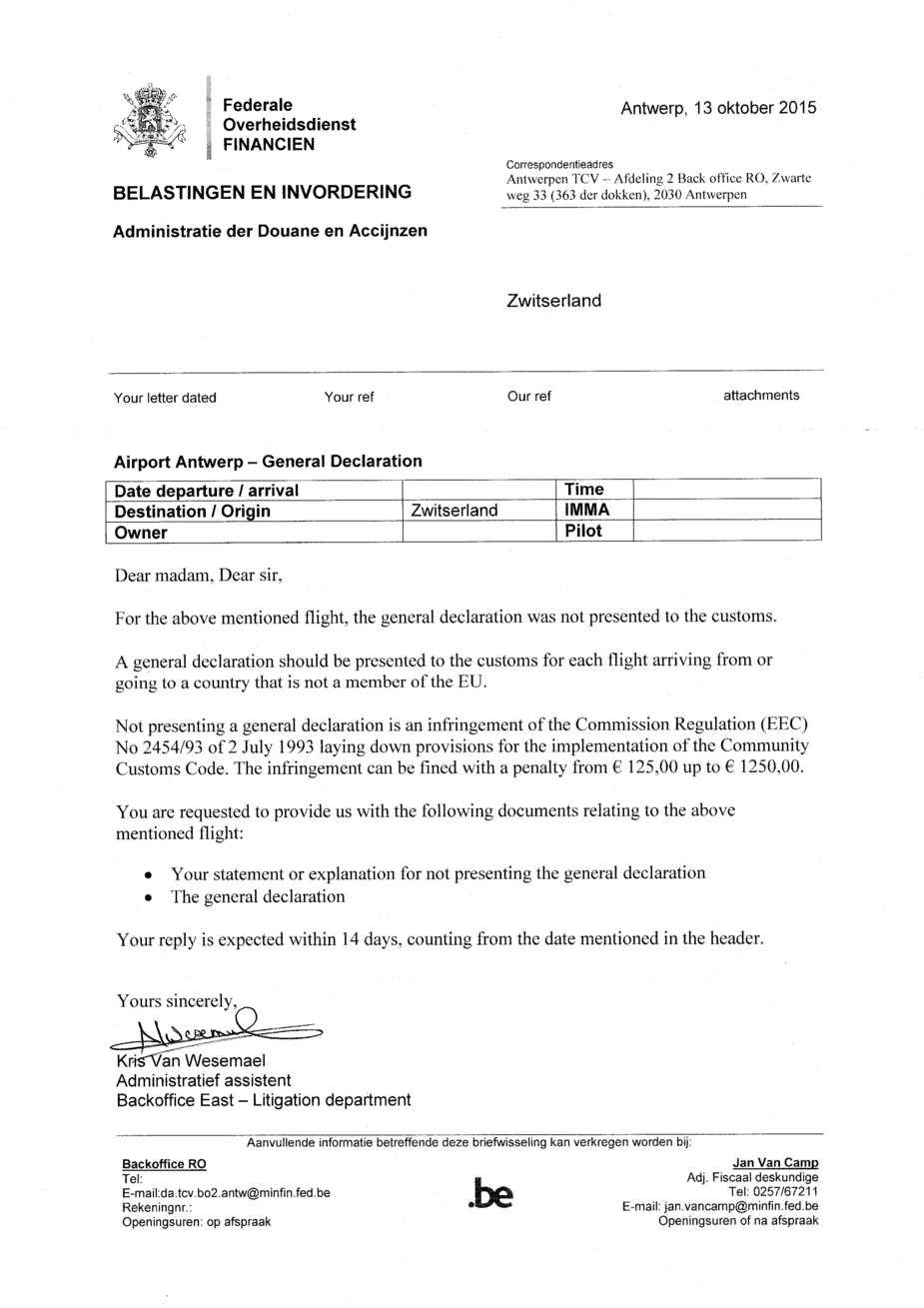 That’s a new one for me that someone north of 40°N wants to see a Gen Dec, so buyer beware.

So given that the rest of the Antwerp experience was substandard too (Hotel: 2* comfort for the price of 5*), I’m not all that keen on going back there again…

Dear Sirs, here is my General Declaration: FY (this general declaration is valid until December 31, 2015, thereafter I can send you a new one)

How can you both explain why you don’t supply a GD and supply a GD at the same time? Point them to their logic error in the letter

I always love it when the initial letter comes from the “litigation department”. This probably means the next one will come from the “department of corrections”?

I do not see a problem with the logic: the document was not presented, so it remains to presented now; plus an explication is required why the thing was not done in time.
What I do find weak is that they blankly state the “General declaration” is required, without referring to chapter and verse of the law. And also, I should expect the customs officers at EBAW to have pointed out the requirement, they could see the flight was into Switzerland, couldn’t they?

No complaints accepted about my original city, though: had you been clever enough to announce your visit some recommendations for hotels could have been given.

Granted that I have not flown between the UK and Schengen very much, but I have never submitted any such declaration, nor did I know that one was required on this side of the Channel, and even less so that this was called for by European Regulations.

There was no one. I reported to the C office after landing and before departure, and they didn’t tell me I needed to hand out a GenDec, either


I have never submitted any such declaration

I did, in Greece.


this was called for by European Regulations

I guess it isn’t, at least the cited EEC regulation never mentions “general declarations”. I guess this is an intimidation tactic that doesn’t have a leg to stand on.

According to the AIP, it is:


I guess it isn’t, at least the cited EEC regulation never mentions “general declarations”. I guess this is an intimidation tactic that doesn’t have a leg to stand on.

I browsed through the regulation 2454/93 and it seems like it concerns declaration of goods and cash brought across the border. When arriving at a port of entry within service hours I would not expect having to fill out any form. When flying to unattended airports in France where I need to send prior notice by e-mail I generally indicate the citizenship of passengers, passport numbers and that we have nothing to declare. That’s it…

Now I am very curious about others’ experience at other airports around Europe in that respect.

I feel quite sure this is an error on the side of the customs people. Your letter came from the Antwerp Docklands, where they normally treat cargo shipping only.

Greece uses the Gendec but it is largely a statement that nobody has tuberculosis and such. Half the time they don’t bother anyway. It’s popular at Corfu and a few other places. Never seen it elsewhere.

Peter
Administrator
Shoreham EGKA, United Kingdom
42 Posts
This thread is locked. This means you can't add a response.
Sign in to add your message

Customs and Immigration in Europe (merged)
Where to meet up in 2016?
Antwerp EBAW
UK GAR form (merged thread)