ATC arguing with pilot re a request to turn to avoid

Sure, anything up to 5 or 6 degrees I don’t even call. Thing is, often, by the time you really see and “understand” a cloud ahead (and know whether it will affect you in the vertical sense) it is often no longer sufficient to make such small changes and a higher angle is required.

Having a good PFD with wind vectors etc. I also often finetune a (poor) final vector onto an instrument approach.


Please show me a rule that says you have to fly in the center of an airway.

SERA.8020 Adherence to flight plan
(1) Unless otherwise authorised by the competent authority, or directed by the appropriate air traffic control unit, controlled flights shall, in so far as practicable:
(i) when on an established ATS route, operate along the defined centre line of that route; or
(ii) when on any other route, operate directly between the navigation facilities and/or points defining that route.

PBN discussion has been moved to the PRNAV/PBN thread here

Note that the video is relatively wide angle – about 120 degrees – so everything gets compressed relative to what one really sees. I was at FL160 and the tops of the two areas in question were around FL200. Also due to a fair bit of haze the contrast is not great. This pic shows the general situation in the area: 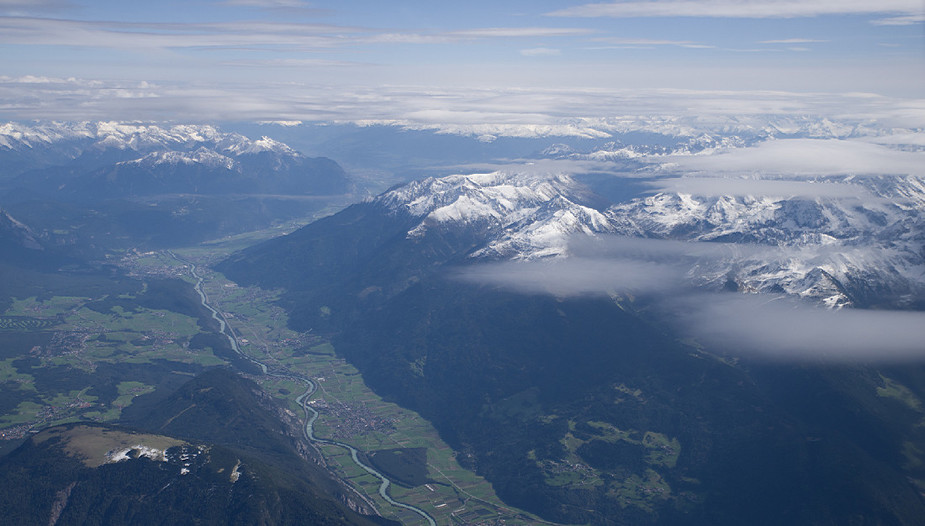 Here is the video and the sound track:

Radar pic before the flight: 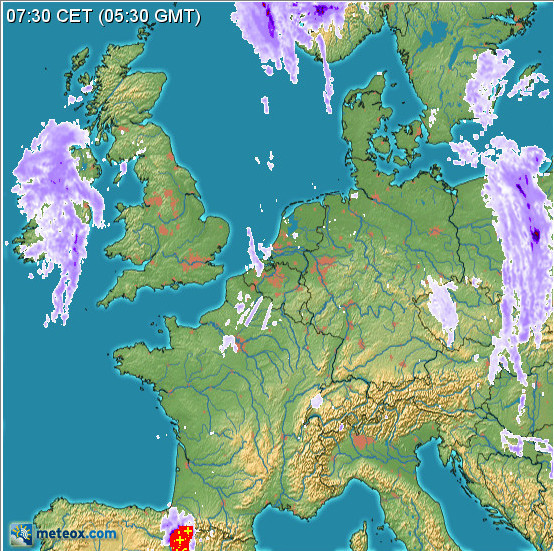 FR24 track in the relevant area (with ATC approval I flew the LOC/DME 01 under VFR hence the holding pattern at the end): 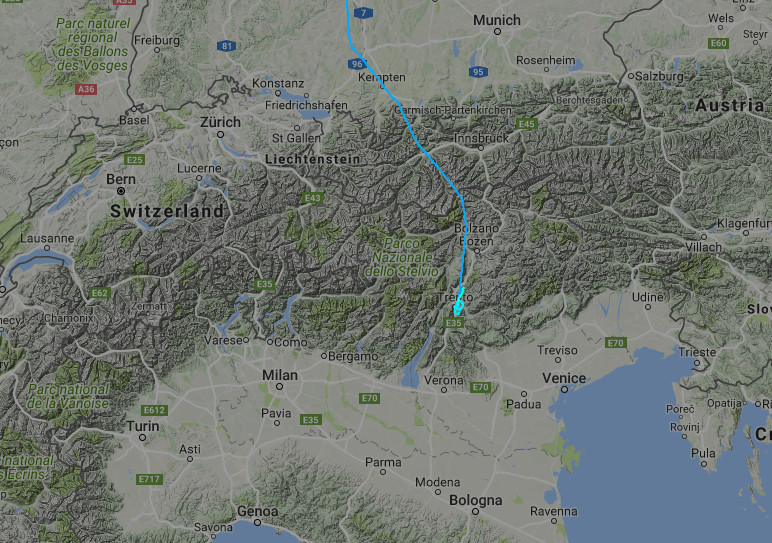 Now that resolves it all. It’s also very interesting.

First, your choice of wording was a bit unfortunate. When you say “avoiding due to weather”, the the “weather” is usually intended as a “weather phenomenon”, i.e. usually some sort of precipitation. Now this clearly wan’t the case, so it would have been better to say “to avoid possible icing” or similar. I know it is almost the same (just longer) but that “weather” word is what got the ball rolling (the other crew speaking German was making fun of you, saying he could see all the way to the Med, with no “weather” all around).

When you had that cleared up (i.e. that you were merely avoiding some clouds which might contain icing) her reaction is strict, but not totally wrong. When we fly IFR, we can’t expect to kept 100% of the time in VMC. It would defy the purpose of flying IFR. Very strictly speaking, one is not supposed to fly IFR in the first place in an aircraft not cleared for limited FIKI if it has to be expected that there will be icing conditions on the route.

Especially over these parts of the Alps, controllers are operating rather shallow corridors of “available” airspace, restricted by minimum altitudes, adjacent sectors, military areas and nature reserves. Of course some of these can be made available in case of dire need. This has to be considered in the flightplanning.

I try to avoid such situations of discussion as above as far as possible, because it puts you in a corner where you don’t want to be as an SEP non-FIKI pilot. In fact, SHE might have filed a report after this.

Bosco, I agree with your analysis of the situation – with one exception: Avoiding clouds that might contain icing justifies asking for alternative ATC instructions (climbs, descents, turns) just as much as avoiding TCUs, CBs etc. Merely filing an IFR flightplan does not give a TB20 the same weather capabilities as a A320 and even when it comes to convective stuff, there is Wx that you better avoid in an SEP which an airliner happily penetrates. The ATC system needs to account for those different capabilities. I do not think that this warrants a “report” by ATC: Just from looking at the pictures there was no reason not to depart on that flight, there were plenty of options (e.g. turning around) and safety was never compromised.

Peter, like Bosco I think the whole thing would have turned out into a non-event had you made it clear from the outset that it was a small cloud with possible icing that you wanted to avoid and not the usual convective stuff. The german dialouge shows that the other side was under the impression that you wanted to generate your own shortcut…

the other crew speaking German was making fun of you, saying he could see all the way to the Med, with no “weather” all around

What an unprofessional idiot, but probably it was true from FL300+. Clearly he wasn’t going to say it in English. He probably also had no idea where I was. Twats like that should not be flying airliners.

Very much so; you would have got icing in those clouds, at -6C or so. I am not doing that above the Alps. I am also no longer doing e.g. -15C in IMC above the Alps because it can stop the engine.

BTW I did say “icing conditions” in that dialogue but probably it was elsewhere. I am still editing the full video.

I though that was a very interesting video, thank you.

I do think it reveals a lack of understanding of the differing requirements of users of the system. Unfortunately there is so little use by SEPs in Europe that too many think everyone shares the same performance and operating capability.

I wrestle with Boscos point. On the one hand I can see that it is reasonable to expect anyone flying IFR to have certain capability, but at what point do you become an unacceptable nuisance in the system? To me it is difficult to imagine most of the time en route at low level you could become an unacceptable nuisance. After all that airspace is empty most of the time, other than in respect of aircraft climbing and descending through.

I am also not sure about the debate over phraseology. Surely any conditions that you consider unacceptabe is “weather”? Isnt it as much up to ATC to ask you to clarrify? After all it was hardly as if the frequency was busy – in fact far from it. It seems to me whenever something slightly unusual occurs we get too caught up in sticking to “standard phraseology”. After all there is a “situation”, the two parties are having a “discussion” to establish what is needed and that is fair and reasonable. I dont think pilots should necessarily just “expect” because if that is what you need we all know what to do, and I think in this case there was abundant time to establish what was needed and why. Having done so, it would be a terrible state of affairs for ATC to second guess the pilot, and it shoudl only remain for the two parties to work together to achieve an acceptable outcome.

Writing anyone up to me is a crazy notion, because if ATC put you into conditions that result in an accident the outcome is never going to be good (for them, never mind you), although I can see that if you feel ATC where being uncoperative then you do everyone a service to point this out.

If anything, for me I would have been more descriptive earlier and said something along the lines that I am VMC but have some build ups to the left and right of my heading at 50 miles that I need to work around because of the risk of ice and 10 right or left would work very well, as I cant get over or under. I think the frustration stems because ATC clearly think you have weather radar, have this report from another pilot of perfect VMC and cant get to grips from the quite brief exchange why you should want a weather avoidance. Banter aside, I also think it illustrates very well why the other pilot should not have got involved in a different language. Had you realised he was taking the proverbial you could have quickly dealt with his “accusations” because it would have been obvious that there was a lack of understanding of the issues you had. The other pilot did no one a good service by not speaking in English.

One thing I struggle with in these things is when you have “obviously/apparently” limited ATC ELP (english language proficiency). You can’t just give them the whole war and peace about clouds here and there. They understand “avoid” and “weather” and “icing” usually gets real attention. Everything else is “very variable” in its effect.

The thing I find worse is the ATCO’s astonishingly arrogant and pompous manner, totally unacceptable for that job, but I would rather others judge that for themselves.

Unfortunately my own transmissions are distorted because the sidetone on the radios is set on the high side. It is OK for me but it tends to saturate the mp3 recorder. I will have to turn the level down, or post-process it (I have found some software which cleans up clipped audio quite well).

The other pilot spoke German for a reason

Very true there is no other (no commercial) traffic at FL160 over the Alps. And Padova were totally relaxed when I got the handover.

She said that it was Padova which did not accept you on that heading at that altitude. So not all her fault. She was merely relaying the restriction from Padova. That makes sense; “northern European” controllers tend to make things possible. It’s usually the southern Euopean controllers that tend to be very formalistic and don’t understand SEP IFR. On the other hand I do think it is true that the minimum level west and southwest of BRENO (Ortler area!) is higher than FL160.

But I agree that she wasn’t doing well in communicating with you (although her English is clearly good; it was more a case of not knowing well about icing threats and not taking the time time to explain a bit better). Instead she conversed with the other pilot (addressing each other by forename!) and said to him that your description of the situation was “not credible”.

boscomantico
Mainz (EDFZ), Germany
183 Posts
This thread is locked. This means you can't add a response.
Sign in to add your message