I'm exploring the altitudes above FL200 and wonder what emergency oxygen system are used by forumites. My primary system is a MH pulse oxygen system. With the turbo charger I can go higher than before (FL150), so a quick return from lets say FL240 to FL100 is not an option, considering useful conscious time of 3 to 5 mins in FL240. There is no way to get down 14000 ft in that time without damaging the plane or our bodies (barotrauma). Some emergency system needs to be available. I thought about something like that: Oxyfit What do you use?

I have a bottle like this, it's only good for a few minutes but that should be enough. There is better stuff like Peter posted, designed for evacuating/rescuing people from a boat that is under the water surface.

The PA-46 has chemical O2 generators. From FL240 I would drop gear and speedbrakes and could get down very quickly. But I guess this is different in an unpressurised aircraft where the baro effect on your body could be significant. What is your max rate of descent at top of green arc?

@Achim. I think Peter posted a link for air supply in case of ditching. We don't need air at altitudes, we need oxygen. Do you consider to fill those cylinders with oxygen?

@Jason. My gear down limit is 130kt and I can have 20 deg flaps with that speed. So I guess full flaps and 109 will give me better decent, but I have to find out.

Do you consider to fill those cylinders with oxygen?

Why not? Maybe even with Marlboro smoke but unfortunately I'm not a smoker.

Fortunately in the PA-46 I can lower the gear at 165kts and keep it down up to 195. While I can lower 10 degrees of flap 165kts also, I would be very reluctant to do that for an emergency descent. But gear with speedbrakes gives 4-5k fpm.

Of course you do get a bit of a boost from the rapid descent in that the time of useful consciousness applies if you stay at the altitude. If you get down to the mid-teens you will have more time.

The portable systems are extremely reliable and I have never heard of failures. 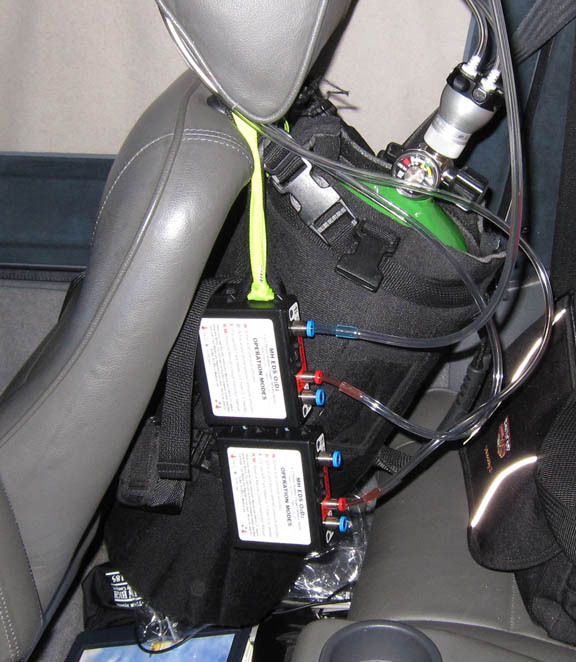 The advantage of fitted systems (mentioned earlier) is that they are clean and tidy and you don't have pipes everywhere, but the cylinder needs to be refilled in situ, which means you can't use scuba shops etc, and may or may not be an issue according to whether the owner of your hangar allows you to keep a refilling cylinder in the hangar. One can also refill from business jet service facilities but the cost is usually high - I have seen £75 usually but was charged £150 at Biggin Hill to fill a small cylinder.

A while ago I spent a bit of time investigating a suitable adaptor to go from the 540 thread to the bizjet refill connection, just in case I need it one day, but despite making fairly extensive enquiries, including taking photographs of the actual source fitting, I could not find anything I could buy. Obviously it exists but now my "48 cu ft" composite cylinder has put an end to all refill hassles anyway because it outlasts the longest possible holiday trip even if done largely at FL200.

I know it's for a different purpose, and is only required in an emergency, but the CJ3 has a 50 cubic foot oxygen bottle, and that could have to supply 10 people in a descent down from FL450.

Your 48 cu ft cylinder is quite admirably large.

Peter has probably enabled his TB20 to get to FL450 through careful reverse engineering of the autopilot servos...

And the extension to 10 passengers in a TB20 is amazing

mdoerr
EGBE - Coventry, United Kingdom
495 Posts
This thread is locked. This means you can't add a response.
Sign in to add your message