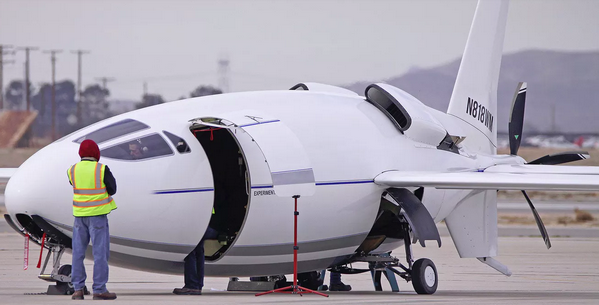 The specs they are quoting are unbelievable, for a piston engine.

The patent goes on to describe a notional aircraft that would cruise between 460 and 510 miles per hour at an altitude of up to 65,000 feet, yielding a fuel efficiency rate of between 30 and 42 miles per gallon. To put this in perspective, the Pilatus PC-12, a popular light, single-engine turboprop aircraft has a service ceiling of 30,000 feet, a cruising speed just under 330 miles per hour, and still burns, on average, 66 gallons of jet fuel per hour, for a fuel economy of roughly five miles to the gallon. Even going to a Learjet 70, which has similar speed performance to what’s stated in the Celera patent documents, but still nowhere near as high a ceiling, we are talking about roughly three miles per gallon of gas at cruise. So, Otto Aviation is talking about performance that is at least 10 times more efficient than existing light business jets with similar cruise capabilities.

Reminds me of the Raptor which I am following the development of: http://www.raptor-aircraft.com/design.html. Although it’s a canard design the designer also has lofty goals for efficiency, but not quite as ostentatious as The Celery. Maybe there is something in the bullet profile though.

“Celera” (spelled “Celerat” but the final “t” is silent) means “crook” in French.

It follows the current trend in aero design. Laminar flow as much as possible, keep propeller behind to not disturb it, and boundary layer ingestion engine.
They can achieve a good percentage of drag reduction, but anyway the specs seems way too optimistic.

Is the claimed ceiling actually impossible?

Also, if you have 2 engines driving one prop, is the Vs still limited to 60kt?

A bullet design with prop in the back maybe best for cruise but will have a huge pitch/speed/power stability
How do you slow down? flare to land? recover from a stall?


if you have 2 engines driving one prop, is the Vs still limited to 60kt

No idea. But irrelevant here, since it has one engine – according to the FAA aircraft registry


Is the claimed ceiling actually impossible?

At 65,000ft the atmospheric pressure is down to 0.06 atm. You need to move a lot of volume to produce any amount of power (for which you need mass). The turbo-compressor system will have to be tuned in a very particular way and work quite hard, because pistons going up and down are mostly useless up there.
The prop is again too small to displace enough volume and produce any thrust at high altitude.
The mock-up has far too little wing surface to carry this big suppository of a fuselage up to that thin atmosphere.
And let’s not talk about structural strength (and implied weight) needed for the pressurization.

All these, and more, trade-offs are in the U-2 design, and that thing does not look like a U-2.

mh
Aufwind GmbH
EKPB, Germany
130 Posts
This thread is locked. This means you can't add a response.
Sign in to add your message

Having an avgas tank at a farm strip
How can one detect a broken piston ring (high oil consumption)?
KFC225 pitch servo failure?
How high can you fly as VFR?