Nothing unusual and no major injuries but interesting because there are good pictures of the plane desceding on the chute: 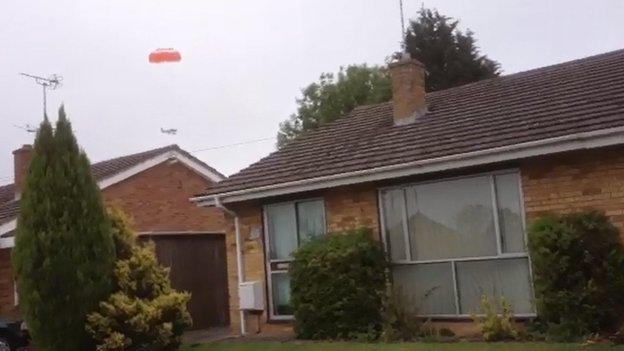 The really bad thing is that he is N-reg...

Any views on the prop blade damage, and indication of available engine power?

Strangely I was talking on the phone to my mother, who lives in an adjoining road, and she said that "some aircraft was really loud and that it can't have been me as I was talking to her". Not that the C150 I fly sounds anything like an SR22!!! Must say I assumed it was an RAF aircraft on another training exercise, its engine notes bouncing off the nearby hills. While it is great that no-one was hurt it was a shame that the pilot didn't make the other side of the road as there is at least a 2 acre field of allotments and within 500 yards a massive school playing field.

But what he was doing at the supposedly reported 1000ft when so far out. Obviously not engine failure as the engine was still firing; yes the cloud base was low....I live on the East side of Cheltenham and couldn't see the top of Leckhampton Hill from my windows... and he cannot have been on an ILS approach as it was not working due and no radar service available.

While it is great that no-one was hurt it was a shame that the pilot didn't make the other side of the road as there is at least a 2 acre field of allotments and within 500 yards a massive school playing field.

"I's a shame" - I don't know. Hitting a target with something under a parachute is a very difficult task, even experienced paradroppers get that wrong most of the time. And for someone who did this for the first (and probably last) time in his life, I think the result is excellent. No people or animals harmed and minor damage to some plants and garden furniture. Plus a new entry in Mr. Cirrusses order book :-)

what next
EDDS - Stuttgart
lenthamen
07

Once you pull the chute you become a passenger. There is no way to control the parachute flight.

It would have been more of a shame if it had made the school playing fields, while they were in use.

An apparently reliable source has it that the pilot was making an RNAV instrument approach and experienced "navigational uncertainty." You can draw your own conclusions, but I don't think this is a clear-cut best result.

I understand that this was a case where control was lost in IMC on the RNAV approach. From what I have heard, the parachute saved the pilot's life.

JasonC
EGTK Oxford
94 Posts
This thread is locked. This means you can't add a response.
Sign in to add your message