Today we had one more RTF conversation with München Radar that is unbelievable. There was a forecast about embedded CBs. We were just handed over by Vienna and were on an avoidance heading at FL200. The Munich ATCO sent us back towards the clouds. We requested 20 degrees to the right. The ATCO asked for the the exact position of the CB. We replied that we’re not radar equipped and have to stay out of the clouds. He asked if we are IFR licensed. Affirm. Then he asked if we speak German. Affirm. He said to us in German, that it makes life form him very hard if we have to avoid every CB all the way to Mannheim. We replied that we need avoid anyway. He gave in and handed us over shortly after.

I ask my self what is this guy doing for a day job?

Sorry I’m not sure I understand – you were trying to avoid a CB, or a cloud?

A cloud with potentially embedded CB.
If this controller is not here to help pilots in the air, he has to realize he’s useless.

Call him after landing. Posting here won’t change anything.

I had a similar thing with an Austrian lady ATCO here.

Of course a confident and experienced pilot will look after the safety of his aircraft and passengers and will avoid hazardous weather regardless of clearance, having advised ATC of his intentions if possible. Sometimes it isn’t possible due to a lack of ATC ELP, or because somebody else is reading out War and Peace on the radio.

The problem is that most pilots will obey ATC blindly because they have been trained to be scared of them, so a rogue ATCO like this (they are very rare, especially in “northern” Europe) can potentially create a dangerous situation.


I had a similar thing with an Austrian lady ATCO here.

That was a double misunderstanding. ATC are used to „avoid“ terminology from airliners for buildups showing on radar. Asking the same for clouds/icing conditions confuses them. „Request heading so and so due to icing conditions“ will work better.


have to stay out of the clouds

I think that bit was lost in translation, I would just have said in plain English “I want to avoid a thunderstorm” (it includes getting into a big cloud)

“I want to avoid a thunderstorm”

That won’t help neither. “Req hdg/level change due to icing” works best. Every atco understands the consequences and urgency of icing and they know they cannot verify this with synthetic weather overlay.

Well that’s exactly my question. I don’t think we can expect ATC to help us stay out of ANY cloud. If I don’t have onboard weather, and the forecast has embedded CBs, I either go VFR (if the cloud base is high enough) or I cancel the flight. I don’t file IFR and expect to be able to visually avoid all the way.

Edit: don’t get me wrong, if you need to deviate for weather reasons, you should ask and you should get it. But should you fly if the probability you will be able to comply with ATC routing is 0, or less than 30%?

I think the key point is to always use ICAO phraseology, which means keeping it very simple: Nxxxx request 20 degrees left to avoid.

I am sure Airways knows this much better than me but I would not expect “due to icing” to be ICAO phraseology, so if you get an ATCO who cannot speak English (i.e. just knows the standard phrases) you won’t get a response. In “Germanic” countries poor ELP is rare but it is a good general rule. You can always drop down to normal English to give them more detail, but you can be really surprised if you try that in France or Spain.

If you say “to avoid” that is all you need to say. That is all that airliners say, and they will damn well do it on their own if they don’t get it and the “thing” in front is big enough.

But should you fly if the probability you will be able to comply with ATC routing is 0, or less than 30%?

Yes you should, because you are entitled to carry out hazardous wx avoidance.

If I was scrapping a flight it would be for a different reason: not expecting to be able to fly the enroute section in VMC, and the temps being below 0C. With a 18k-20k ceiling that means scrapping a lot of flights. For example I would not fly through this 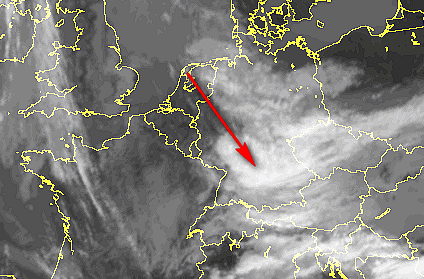 which looks like ~FL200 tops. The TKS won’t last long enough no matter which way you slice that one

Peter
Administrator
Shoreham EGKA, United Kingdom
34 Posts
This thread is locked. This means you can't add a response.
Sign in to add your message

What if ATC deny an "avoid due to wx" because of military airspace?
Convenient airport for München?
"Descent immediately" - A320 behind you, 4 miles
VFR-only certification, and moving these to IFR, certifying the RV, etc