I have owned my Mooney for about 18 months but due to a very long first annual and much of my flying time being dedicated to notching up the 50 hours required for the IR, I didn’t really stretch its legs before, and hadn’t gone abroad yet. As a relatively low time pilot I was waiting for a CAVOK day for my first long trip and that materialised on Friday so I decided to head off to LFRC and stock up on wine.
We departed at about 10:45 local and it was evident fairly early that it would not be a great sightseeing trip. Over the sea it was even worse than the photograph. I was in receipt of a traffic service from Western Radar all the way from the FIR boundary at BAKUR to just before SKERY which was helpful but there isn’t much at the levels I was flying at.

Flying down the Irish coast into a 35 knot headwind during the climb meant the cars on the motorway below were passing us out. I wanted to cross the Irish Sea at FL100 and was cleared to do so with no problem but I requested a stop climb at 8000 ft because the conditions were such that performance was awful. It was an ISA+20 19 degrees at FL80 and for some reason RPM was maxing at 2600 RPM instead of 2700. Even when I settled into cruise keeping the hottest cylinder below 380F without using cowl flaps was tricky. All the stuff I’d read on engine management was immediately put to the test on my first long distance flight!
The leg from STU to BHD felt like an eternity at a ground speed that was topping out at 115 kts.

We were cleared across the CI zone via SKERY-ALD-AGANO. The photo below is Alderney and as you can see things were clearing up a bit.

We got passed to Deauville approach as we began our descent and the controller didn’t fill me with confidence. “I call you back”…he didn’t…..Called field in sight to remind him…“I call you back”….After a 3rd call he engaged with us and we were able so slot in behind traffic on a right downwind for 10 after having to fly around for a bit wondering what to do. Was a bit worried to hear the 20G30 wind relayed to us but I squeaked it on! We parked up beside a Beech that had just arrived and was cooling off in the sunshine

After lunch in Luc and Edith’s cafe and loading up the back with wine, we decided we were probably just short on fuel and it wouldn’t hurt to put some in. It took the guys in front of us about 20 minutes to figure out how to work the machine and the pump was incredibly slow.

After about a 2 hour stay we were on our way again. Departure was smooth and when we were handed to Deauville I decided to skip them and call Jersey Control. It took 3 calls to get an answer but we were cleared through at FL80 the same way as we had come through earlier. Nice to (barely) see the English coast after the long over water leg. We had life jackets on and the raft in the back but there wasn’t a flicker out of the engine. I had set it up much quicker on the return leg as I knew what to look for. I’ll still be a bit more comfortable when I finish the IR and can get up to FL120-150 for these crossings though. 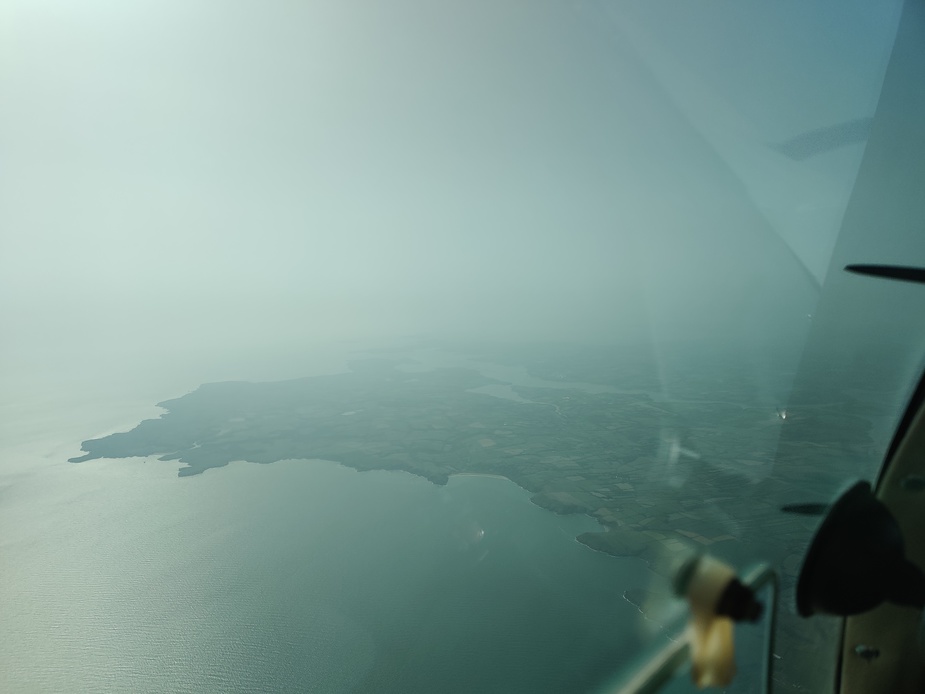 Unfortunately the wind had died down a bit on the way back so we were only getting about 20 knots on the tail. Coasting out at STU I got a bit worried about what looked like a thick layer of stratus as fair as the eye could see. The TAF 2 hours early had been CAVOK. Dublin ATIS was giving BKN at 3200 ft and thankfully it thinned out and we descended to 2500 ft once we were in glide range of the Irish coast. 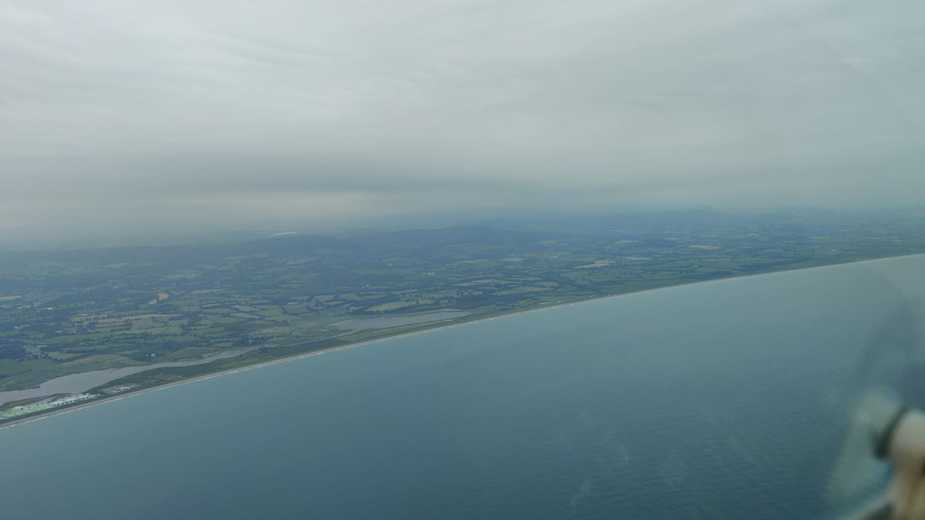 Cleared through the Dublin zone the airport snuck up on me quicker than I was expecting and I ended up approaching the left base at 2000ft and 130 kts. Power back, gear down, 1/2 flap all in about 20 second then full flaps shortly thereafter did the trick and I was down at 90 kts and about 700 ft turning final. All in all a successful first long trip. The toughest part was the multiple trips across the apron carrying boxes of wine to the car to end the day!

Thanks for the report and “Prost!” for the self imported wine as we say in Germany

The Beech G-ZLOJ parked on the apron with the lifted cowling is the plane of @chrisparker IIRC.

We were stopping for immigration en route from Annemasse LFLI to Fairoaks EGTF. The Continentals can be tricky to hot start so I sometimes open the cowlings if we’re only going to be on the ground for an hour. 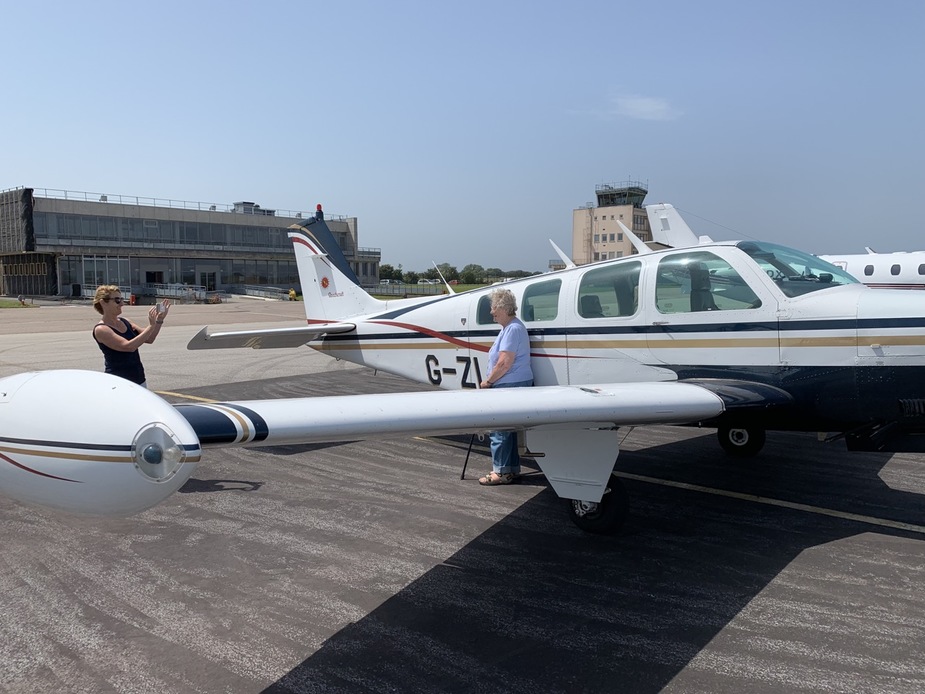 Nice trip report thanks for sharing, yes the FF on that Cherbourg Pump varies between 1gph or nil but Jersey is not far away?

Ps: I would not risk those precious bottles while taxying Mooney on grass but if I have to choose between hit on the prop or breaking the wine, I would go for the prop :)

I should have filled up in Jersey but for simplicity I wanted my first longer trip to be A-B-A rather than A-B-C-A. Next time for sure!

Thanks for your report, zuutroy, and great to hear your plane is now running after all that trouble. Next time I am at EIWT (this summer most likely) we can have a beer

Great trip ! It helps to keep the faith after so many ownerships issues :) That’s a big cargo ! and a fun story to tell your friends when you will serve them this wine :)
Deauville ATC is usually quite friendly and efficient, you had bad luck.
One may try to contact TOTAL for your pump problem. They may not know, and I think they would react to this. It is the first time I hear about such an issue.

Looks like a lovely trip! Thanks for sharing it!


Thanks for your report, zuutroy, and great to hear your plane is now running after all that trouble. Next time I am at EIWT (this summer most likely) we can have a beer

Great. Being a University employee, I’m there regularly in summer

Particularly as I’m trying to get to the magic 50 hrs for the IR.
Only 12 to go!

zuutroy
EIMH, Ireland
9 Posts
This thread is locked. This means you can't add a response.
Sign in to add your message