DME is the future

During the AERO show, I had several discussions with people from the German CAA, AOPA, Eurocontrol on P-RNAV.

Several people there told me that there is a strong political goal to not become dependent on satellite navigation, even when there are two systems once Galileo becomes operational. There appears to be a consensus that terrestrial navigation aids will have to be provided in the future.

With P-RNAV coming (and they all said it would spread quickly), this means that one has to be able to do P-RNAV with ground aids. Today, this is only possible with GPS for GA aircraft.

Interestingly, the strategy seems to be based on DME. Higher accuracy DMEs (and receivers) and more DMEs are supposed to provide P-RNAV capability in addition to GPS/Galileo.

If this comes true and is also applied to GA, it would be rather terrible.

and they all said it would spread quickly

They would say that, wouldn't they?

the strategy seems to be based on DME

I went to a Eurocontrol "navigation workshop" in 2008.

It was slightly farcical and depressing in many ways, not least in the astonishing arrogance of some of the self proclaimed policymakers, but they did make the point about DME/DME position fixing being the preferred strategy for loss of GPS.

Of course this is what big jets already have.

But as you say there is no GA product, and with the GA world run by the USA there isn't ever likely to be.

I hope that - as usual - cooler heads prevail in the end.

In the US, approximately 50 % of the VOR's are planned to be eliminated by 2020 (good luck with that). Even so there are no plans to remove the DME stations that were collocated at the VOR site and in fact additional DME's are planned to be added. This is strictly for the airlines that use DME-DME for enroute navigation and plan on keeping the capability even if the FMS is updated to GPS or GPS/WAAS/LAAS.

NCYankee
KUZA, United States
what next
04

DME-DME is in no way limited to airlines! Almost every FMS has a VPU (Vortac Positioning Unit = DME/DME) attached as a backup for INS and satellite navigation. The VPU is probably one of the least expensive components of the whole system... Bizjets, Turborops, even some piston twins with recent avionics upgrades are DME/DME capable.

This is a screenshot from our FMS during cruise, the precision of the VPU is really amazing. The co-ordinates at the top are the "most probable" position calculated from a weighted average from all sensors, the lower ones are VPU alone. The difference is within a tenth of a nautical mile. 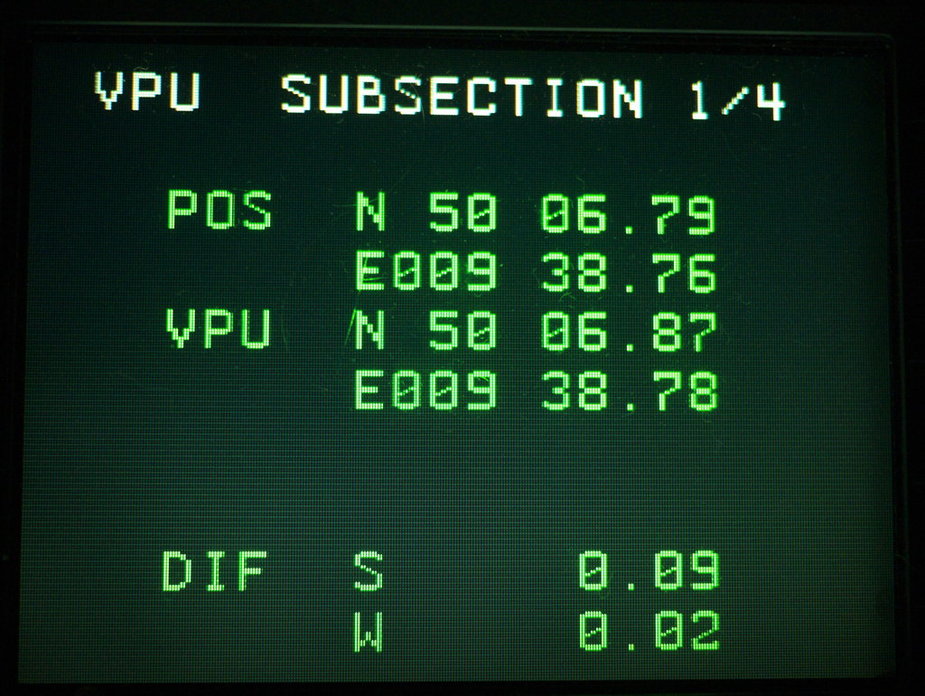 The problem with DME/DME positioning is (and will always be!) low level flying in non-flat terrain. You need a minimum of three ground stations in favorable relative positions to obtain a good fix. And this is very hard to achieve unless an enormous number of ground stations are deployed - impossible due to the very limited number of discrete frequencies available.

Additionally, you get no altitude information from DME/DME.

what next
EDDS - Stuttgart
Peter
05

In 2003 I had one of the last flights in Concorde, and during the obligatory flight deck visit afterwards I asked about their nav. Apparently they had INS which used single-DME fixes. Not 2-DME or 3-DME.

There is a method which uses 1-DME and which is used, in a different way, to very accurately position geostationary satellites in orbit. You get a distance reading to the satellite (easy to do, using basically "DME") and if you repeat that say every 10 seconds then after an hour you get 360 simultaneous equations (with 360 unknowns) for the 3D position, which are solved using the usual pivot method. In fact you solve the equations continuously, just doing the most recent N equations.

So there should be no need for 3-DME if you know your position roughly, and once your velocity vector is roughly established then you need just 1 DME.

The M in NMEA stands for "Marine". NMEA is generally not found in certified aircraft which can be a problem because a lot of the lower end gear (such as handhelds) only support this protocol. When talking serial interfaces, the "AVIATION" protocol would be the equivalent.

Exactly. But it needs that database all the time because it must be able to chose appropriate ground stations during the flight. Our system can interrogate up to 6 DMEs simultaneously.

These methods only work properly, if one is moving - the faster the better. And you need very favorable geometric arrangements in order to make it work. The typical airfield DME will never give you anything but straight line distance during approach, to compute lateral deviation you need a ground station displaced to the side. If the doppler history of the received signal could be measured and evaluated (technically no problem), then single and dual DME navigation would provide high accuracy. "Transit", the predecessor of GPS, worked that way. Tracking only one satellite was sufficient for positioning.

Something similar is also integrated into all (or most) FMS units. They are connected to the directional gyro(s) and the air data computer, therefore they know heading and TAS and from the last known position and the last computed wind they are able to navigate by dead reckoning with good accuracy for quite some time!

what next
EDDS - Stuttgart
mdoerr
08

If this comes true and is also applied to GA, it would be rather terrible

Everyone wants to have VORs and NDBs gone, so there must be an alternative to GPS. DME-DME is a good system. Next point in avionics-projects (with IFR plane attached) with digital coms and ACARS. Time to save some money.

they are able to navigate by dead reckoning with good accuracy for quite some time!

I ask because there is a huge gap between "solid state" gyros (whose heading drift is of the order of 1 degree per minute i.e. useless for navigation by itself) and any "proper" gyro (all of which use some implementation of the fibre loop nowadays AFAIK).

Didn't Narco produce such a unit in the past can't say I've ever seen one or new how well it worked mind you.

Bathman
28 Posts
This thread is locked. This means you can't add a response.
Sign in to add your message