If there is an alternative probe that is PMA approved for fitment you can.

De facto, European aviation, right up to jet airliners (I am informed) would be grounded if FAA-PMA was banned over here, and one often gets a PMA part with an EASA-1 form (from EASA 145 aviation parts distributors) but AFAIK it is still not sanctioned.

It was allowed pre-JAA, certainly in the UK.

This forum is brilliant. I am going to spend more time here, I think 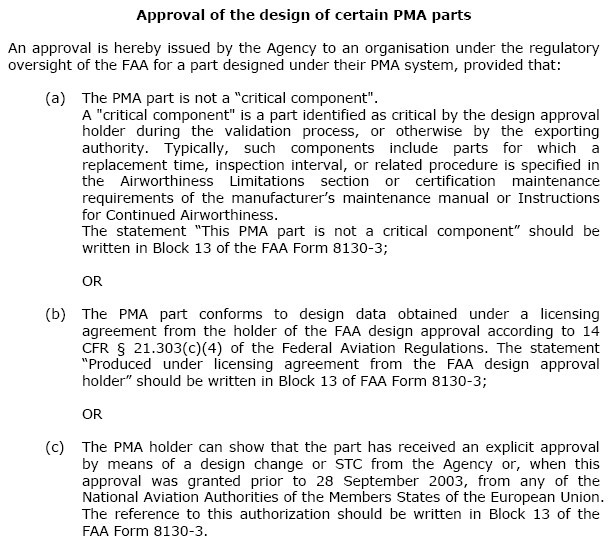 The last paragraph is going to prevent just any FAA-PMA part from being used. It sounds like you have to go through an EASA 21 company. It sounds like another empty concession. The only people who will comply are those who are desperate. Almost no normal US manufacturer is going to be issuing a custom 8130-3. These parts come via normal aviation supply chains…

There is a “OR” between paragraph (a) (b) (c).
Most PMA parts comply with paragraph (a) : LED landing light, sealed batteries, vaccum pumps, alternators, voltage regulators, engine control cables…

For me, everything PMA comes right in without thinking twice.

OK; so PMA is accepted for simple parts, but this is not a blanket acceptance of FAA-PMA.

everything PMA comes right in without thinking twice

The de facto position, for sure.

How many man-hours have they spent on this?

Look what the FAA says about “shall”

(citation from text)
Even the Supreme Court ruled that when the word “shall” appears in statutes, it means “may.”

Yes but last time I checked the US Supreme Court only thinks it has jurisdiction over Europe but in reality it doesn’t.

The shall = must and should = may association has been standard in all legal texts for the last decades. The US government wants to change it but that doesn’t mean that the rest of the world has changed. US corporations still use shall vs should.

Who’s the EASA Plain Language Program Manager? Is he a colleague of the Common Sense Manager?

Just sayin! I think that if the highest US court says that “shall” means “may” -– then probably a german court will have a hard time challenging that.

Yes, that title could be from the “Brazil” movie ;-)

Flyer59
43 Posts
This thread is locked. This means you can't add a response.
Sign in to add your message

Cessna taildraggers are back!
Latest on 8.33 requirements (merged)
Led lighting (merged)
Socata - the most expensive cheap screw ever?