I have not read it myself due to lack of time, but it may interest someone. It was posted on a site behind a paywall (which has few readers) but is obviously a public document. 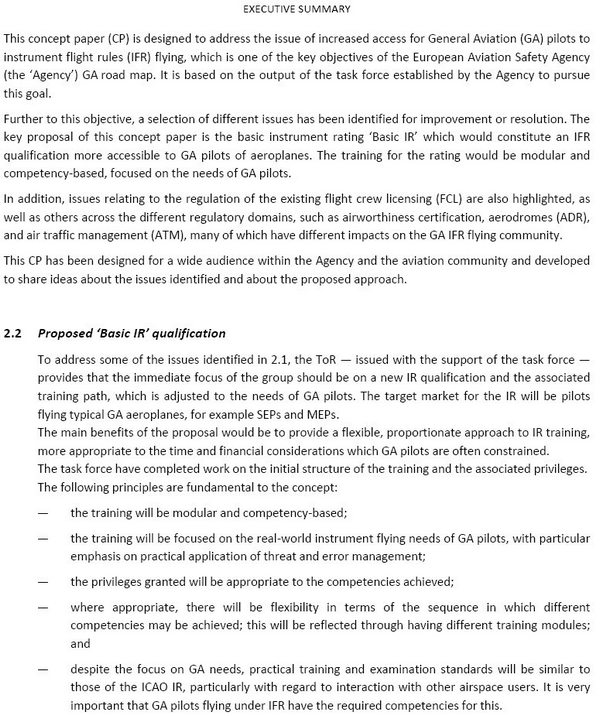 The obvious problem with this sort of thing is that it opens the door to discrimination against private pilots, so they could be excluded from e.g. some airspaces. The CB IR is a full ICAO IR which doesn’t have this problem. But I may not have understood that right…

Europe doesn’t need yet another IR. What is needed is a flexible way to do the existing IR i.e. freelance training and study outside the ATO machinery.

The link to the paper is here local copy

I wonder what this all means?

Oh I’m sorry, I thought you meant the link was behind a paywall.

Upon casual reading it appears to be an attempt at splitting up the instrument rating (IR) into parts:

On completion of all the training modules, the final privileges would be similar to those of the IR, but limited in the following manner:
– limited to single-pilot aeroplanes for which class ratings are required, excluding those classified as high-performance or for which operational suitability data (OSD) has determined that additional training is required; and
– the minima for instrument procedures would be higher, for example 200 ft above published approach minima, down to an absolute minimum height of 500ft. A 600ft cloud base and visibility of at least 1500m would be required for arrival and departure, to ensure that a visual ‘bad weather’ circuit will always remain a viable option

Possible “IFR light” instrumentation requirements are hinted to in 2.3, including this:

In 2.4 there is some hope for less stringent IAPs for GA fields.

cost-effective (preferably public-domain), central database of all the aeronautical information required for GA IFR flight (including flight procedures), accessible through modern IT architectures

I thiought this was what the CB-IR was supposed to be. We seriously need another not-quite-IR?? Or after all the modules will it be an actual ICAO IR?

As far as I understand 2.2.4 passing all the modules put together will make the holder eligible to do a CB-IR, but not necessarily grant it automatically.

If this is a step towards a Euro IMC rating that would be excellent. Even better if us UK IMC holders were granted privilege automatically :)

In principle I like the idea of modules with appropriate privileges.

Adding just approaches would be a very useful step for VFR only pilots. It would allow us to fly on top, without fear that we won’t be able to get down again. To me that’s more beneficial than enroute privileges.

Later being able to add enroute privileges would make it much more useful.

Departure privileges are probably the lest relevant to me, and would be added last.

However, if the pilot would end up with a “lesser IR” at the end, I suspect people would shy away from it. As I see it there are three possible ways to avoid this.

dublinpilot
EIWT Weston
426 Posts
This thread is locked. This means you can't add a response.
Sign in to add your message

Can any kind of IR ever be added to the LAPL?
CB-IR or FAA IR flying N-reg and EASA-reg in Europe
Londoner looking for a place to fly, and what's next ?
The EIR - beginning to end (merged)