Expect vectors without getting any vector

I had the first “interesting” moment of 2015 yesterday, when flying to Maastricht EHBK.
I was given a DIRECT OSGOS, which is at the border of the EHBK TMA.
When handed over to Beek Approach, the controller told me “expect vectors for the ILS RWY 21”.

So there I was, inbound OSGOS, AP in NAV mode, expecting vectors…

After OSGOS the AP sequenced to the next waypoint, which is EHBK.
At that moment the controller told me “Cleared Approach RWY21”.
Huh? I then realized the controller was expecting me to continue on the present heading after OSGOS.
So I quickly activated Vectors to Final and picked up the previous course. 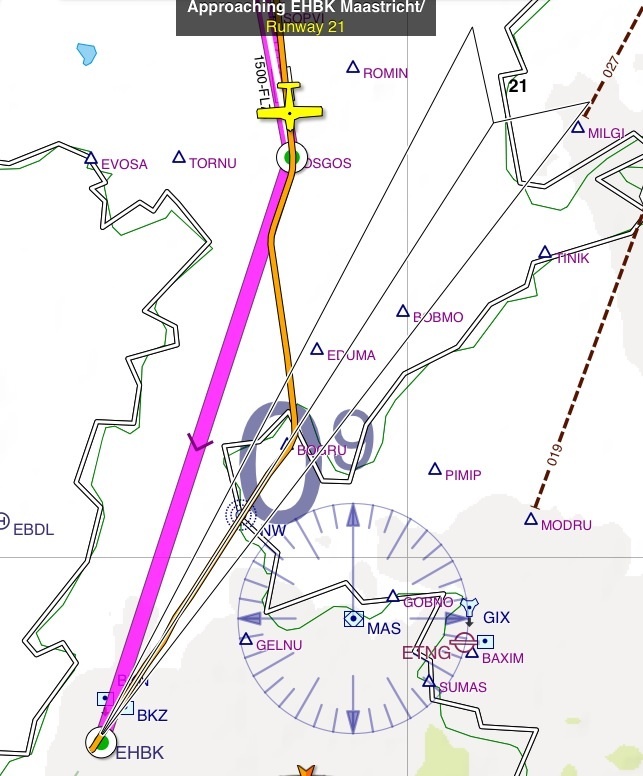 The controller started to question my maneuver: “The radar shows a right turn followed by a left turn, is that correct?”.
I tried to explain the situation. That I was in NAV mode and not on a heading.
What went wrong here?

He told you “cleared for the approach” so you should have intercepted the final course. The ILS is not a DCT from OSGOS

If the approach was loaded/activated correctly and the CRS pointer setup correctly, then the AP should have done that for you.

Continuing DCT EHBK after OSGOS is certainly not correct, you could have continued along the RUMER2M STAR to NW, which would have taken you to the ILS.

But still, the controller should actually have issued vectors before OSGOS, like continue present heading. I’d have asked him how he wants me to continue before OSGOS.

The only question is: have you previously been assigned the OSGOS1M Arrival?
If yes, then you did have a course to fly after OSGOS. If not, then it was it was his fault, since he left you hanging there without an instruction as to the course to fly. But yes, in that case, you should have queried him 30 seconds are so before reaching OSGOS.

I was not assigned an Arrival. The “Cleared for the Approach” came after OSGOS when the AP already picked up the next leg to EHBK.

I should have asked ATC what they would expect me to do; but I was a bit behind as I was expecting further instructions.

The “Cleared for the Approach” came after OSGOS when the AP already picked up the next leg to EHBK.

You flight plan did not allow for OSGOS DCT EHBK. You have to use a published IAF. Therefore your AP was programmed incorrectly. The information “expect vectors for ILS” meant that you will receive headings after reaching your last assigned waypoint. No new heading means keep old heading. Therefore technically the situation was clear but of course not the way it should be handled by ATC.

To me this sounds like an ATC coordination screwup. The phrase “Cleared Approach RWY21” entitles you to

To actually touch the runway you need a clearance to land, unless you are on the ICAO lost comms procedure in which case you just land

The OP did not mention being on any STAR.

I agree with Peter. If ATC actually said “cleared approach”, you could have done any approach you wanted in any way you wanted (full procedure/straight in).

No new heading means keep old heading. Therefore technically the situation was clear but of course not the way it should be handled by ATC.

I don’t believe that if you had never been assigned a heading you should maintain the heading of your own navigation past the clearance limit.

In this situation, I would have queried the controller before reaching OSGOS. If I didn’t get a reply, I would follow the COM failure procedures – in this case head for NW, I guess.

IMHO “cleared for ILS approach XX” means you can fly the procedural (in rest of Europe called “standard”) approach as published.

It usually (always?) means having to fly to the holding fix, initially.

It does not mean you can self-position to intercept the LOC, which is what most people would prefer to do

In practice one should try to “wake up” ATC, and one polite way is to ask for a “radio check”

I would ask “Nxxxxx request direct NW”. But if they give you that, you still don’t know whether you will be expected to fly the published procedure, or just self intercept. It ought to be context-obvious e.g. at a big airport you will get radar vectors.

Peter
Administrator
Shoreham EGKA, United Kingdom
72 Posts
This thread is locked. This means you can't add a response.
Sign in to add your message