Having recently just flown into Norwich for some IFR practice. It was time to take the aircraft for another spin, this time a short hop around the M25 for London Biggin Hill Airport. 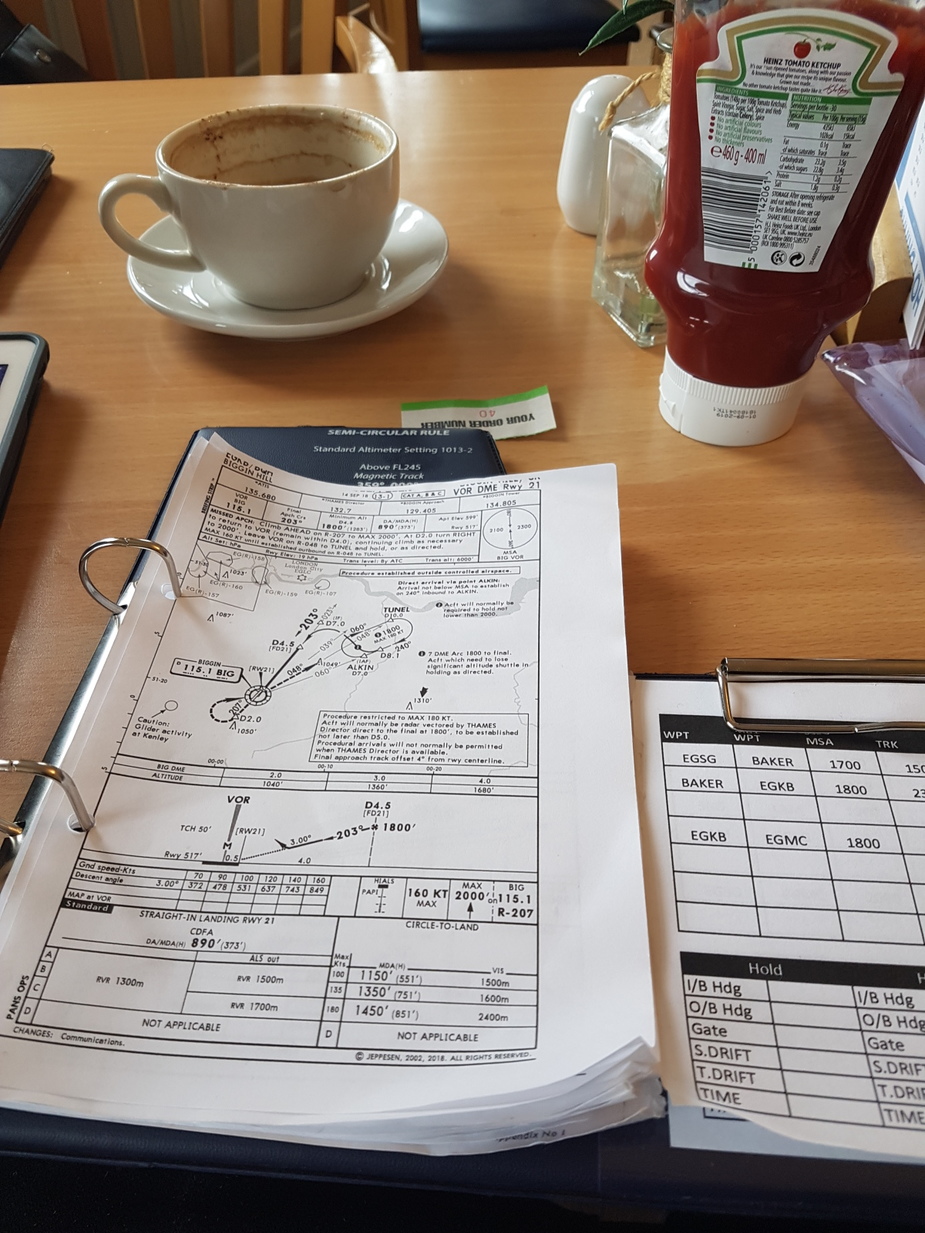 Having had a discussion with my friend who would act as a safety pilot, he suggested the VOR DME ARC procedure because it would boost my skills and hand flying ability in IFR. Having flown multiple ILS approaches in IMC and out of IMC, there was no point at this stage in making another.

A quick check of the weather provided good flying conditions, although a weak band of weather once airborne would provide some interesting IMC flight. After a quick full English and a cappuccino it was time to take to the skies.

A close call with an opposite direction Helicopter and developing those all important Instrument Flight skills flying the VOR DME ARC into London Biggin Hill Airport.

For myself, the only time I’ve encountered a VOR DME arc was during my IR(R) training. So it was a good idea to practice and next time I’ll look to perfect this approach before commencing the EASA CB-IR.

Procedural arrivals not normally permitted when ’Thames Director’ is available. Aircraft will normally be radar vectored, however in this example we was allowed to self positon for the procedure and conduct two holds at ALKIN. The chart for reference for this procedure is AD-2-EGKB-8-2 as of 8 NOV 2018 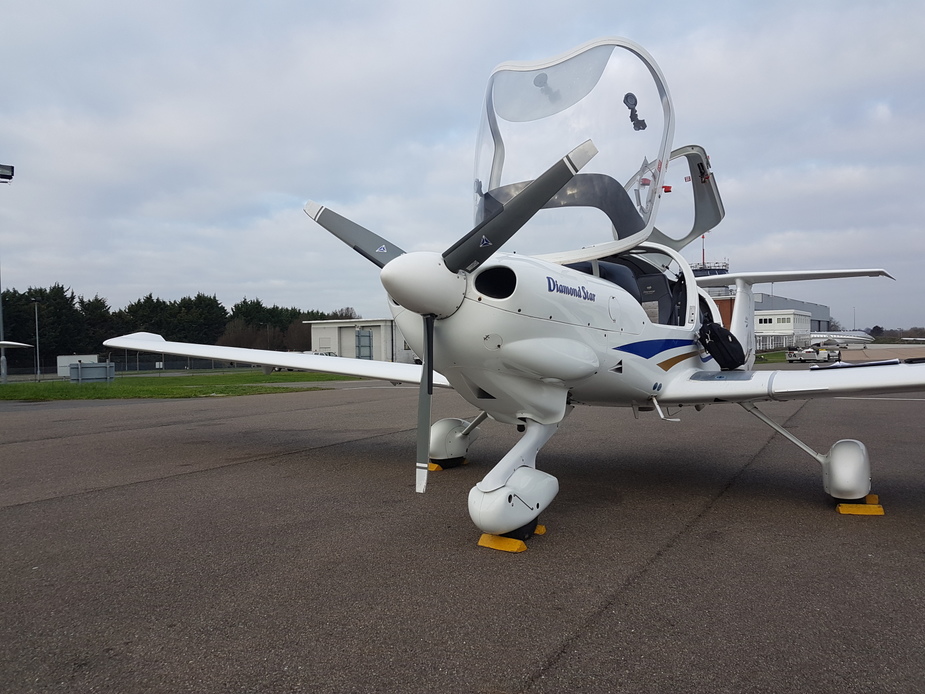 After all that busy flying, we made it to the home of my PPL training. As I understand many have learned to fly at this airfield, from current airline pilots to former RAF heros. A quick walk through the terminal once the aircraft was secured, and a short walk around the perimeter fence to The Lookout cafe for some much needed sugar.

With 40 minutes to go till our 2 hours was up it was time to pay the landing fee for 1150kg (DA40 TDI) at £35.28 incl VAT with 2 hours free parking. Not bad considering we did an instrument approach, instrument departure and had a great service from Thames Radar. Rumours this would be almost doubling in April. 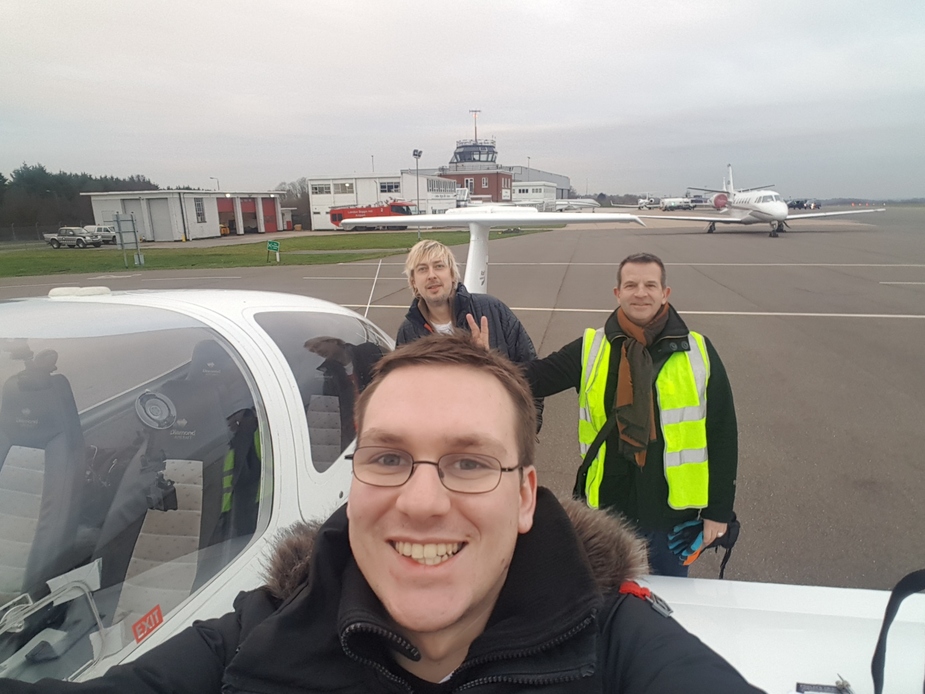 It was worth mentioning that I think I paid for that selfie ;) This place is very busy, and you can see a wide range of business jet traffic. However there was only two of us on the ramp, an IFR PA32 from Rouen preparing for his night flight back across the channel. Not much light aircraft at Biggin for sure. 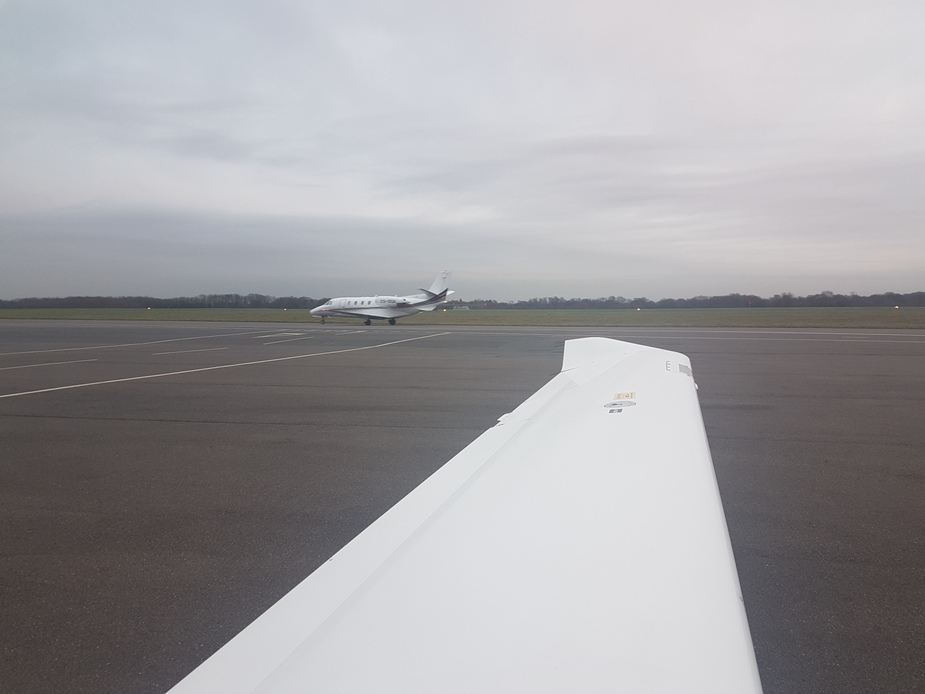 After a brief stop at London Biggin Hill Airport, we depart IFR at Sunset via the overhead. Follow through the whole departure sequence from startup to airborne.

I am very surprised that they did not charge you for the training approach.

This is in place only to deter flying schools from doing multiple training approaches there. The fee is not charged when doing A to B (B being Biggin), with a full stop.

That’s how I understood it. It wasn’t a training flight either. As I’m exercising my license privileges.

You are lucky. I would expect them to interpret doing a procedural VOR/DME when the radar vectored ILS is available, as training. Why else would you do it?

I am not advocating that you should have been charged, I am delighted you weren’t, just warning people to expect, or at least to be prepared for, it.


Rumours this would be almost doubling in April.

Can someone elaborate on this?

I think the key is in the words “reserves the right to charge”.


I think the key is in the words “__reserves the right to charge__”.

I think that if you go there for training, or if ATC think you are training, you can expect to be charged. They certainly don’t want training.

Nobody wants schools to fly training approaches, unless they pay for it, because you would get loads of traffic from the FTOs.

The UK CAA has blocked the flying of these outside UK airspace, which is a pity because the N French airports are keen to get extra IAP traffic, and perhaps even landings. They can see the writing on the wall otherwise.

Is this an actual rule or (another) self perpetuating (false) perception along instructors/ATO?

When I did my MEIR, I had suggested we did a weekend trip to Paris. We ended up not doing it, but the instructor seemed OK with the issue (but said there would be a lot of dead time and that wouldn’t be the most efficient use of our time to pass the test – and he was right, especially since I already had an SEIR)

Noe
14 Posts
This thread is locked. This means you can't add a response.
Sign in to add your message