Articles by Deakin, Braly, Busch et al, have been useful (and in some cases, controversial); there’s also stacks of valuable comment on this forum. One outfit specialising in engine management and offering online tuition is Advanced Pilot Management, and I was particularly interested in one (downloadable) Powerpoint presentation:

“….on leaning normally aspirated engines for high-altitude takeoffs …..and in the climb”. Their object is to “…identify a Target EGT that you can use during all takeoffs and climbs from any airport at any altitude” (their emphasis).

Can anyone answer that for me? 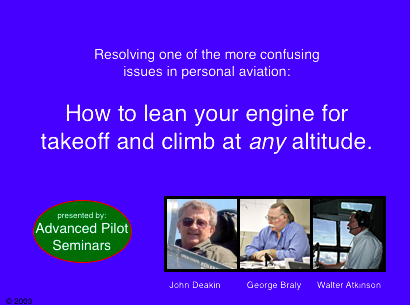 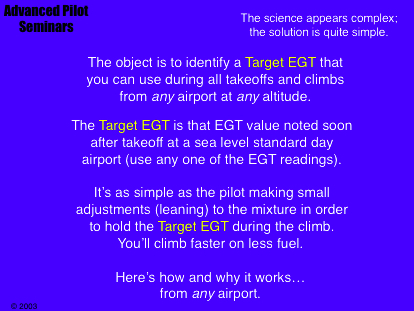 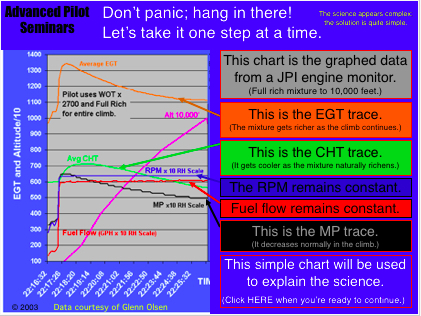 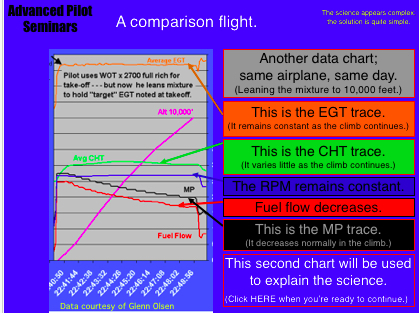 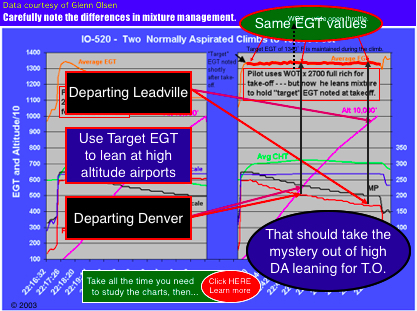 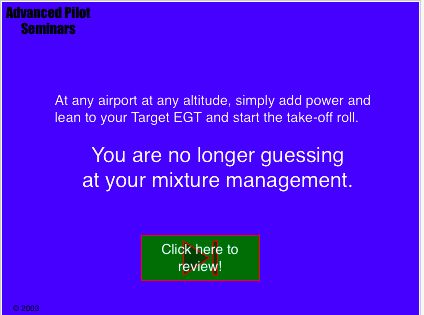 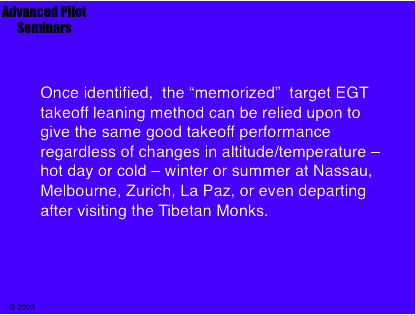 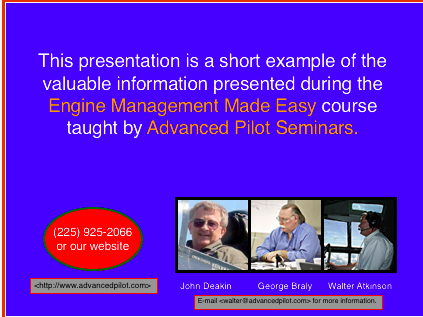 Peak EGT does not change much over altitude, normally. Hence, you can determine a target EGT, which you will want to see, whether you are at sea level or at 5000 feet. In most NA singles, peak EGT is somewhere around 1550. If that is the case, you’ll want your takeoff EGT some x degrees below that (rich of that). Most people would recommend about 150-200 degrees ROP. This is usally sufficently far enough away from the “peak CHT EGT”, which is about 50 ROP (which would toast your cylinders), yet doesn’t sacrifice all too much power (best power is aout 100 ROP). When ROP, the power curve is quite flat anyway.

Constant EGT climb method, which Peter has been teaching world-wide

learned me the value of 1280F, which is not far from bosco calculation.

The other way round is to take into account MaxFF for a given density altitude.
In my 182, it is placarded near the throttle, so when taking off from elevated airport, I can also apply full throttle, lean to get target Fuel Flow, and roll.

Looking for 1280F EGT gives same result, but with EGT, you have more latency than fuel flow.

Thanks for the replies.

I’m slow on the uptake, though. Say I’m sitting at 5,500’ above msl, high temp., and I calculate my density altitude.

From the Powerpoint intro, where do I get my target EGT from?


From the Powerpoint intro, where do I get my target EGT from?

My understanding from the slides, you do one takeoff one time from a sea level airport when temperature is 15°C, you takeoff and shortly after takeoff you look at the EGT gauge. The number you read then is your target EGT for all temperatures and all altitudes.

My understanding from the slides, you do one takeoff one time from a sea level airport when temperature is 15°C, you takeoff and shortly after takeoff you look at the EGT gauge. The number you read then is your target EGT for all temperatures and all altitudes.

You need to find out YOUR aircraft‘s peak EGT, and then go ROP by as many degrees as YOU deem best/sufficient for cooling, efficiency and performance. THAT is your target EGT. So, it‘s not something that you can determine from one single takeoff. And even less so before that first takeoff. It has to come from experience, with that particular aircraft. But once you have it, it pretty much works, no matter what the density altitude on the next takeoff is.

If all this is too complicated for you, try to get a table of takeoff fuel flows for your aircraft. That is usually close enough. Cirrus and Cessna put these small tables on the instrument panel. In some other aircraft, they are noted on the fuel flow instrument. 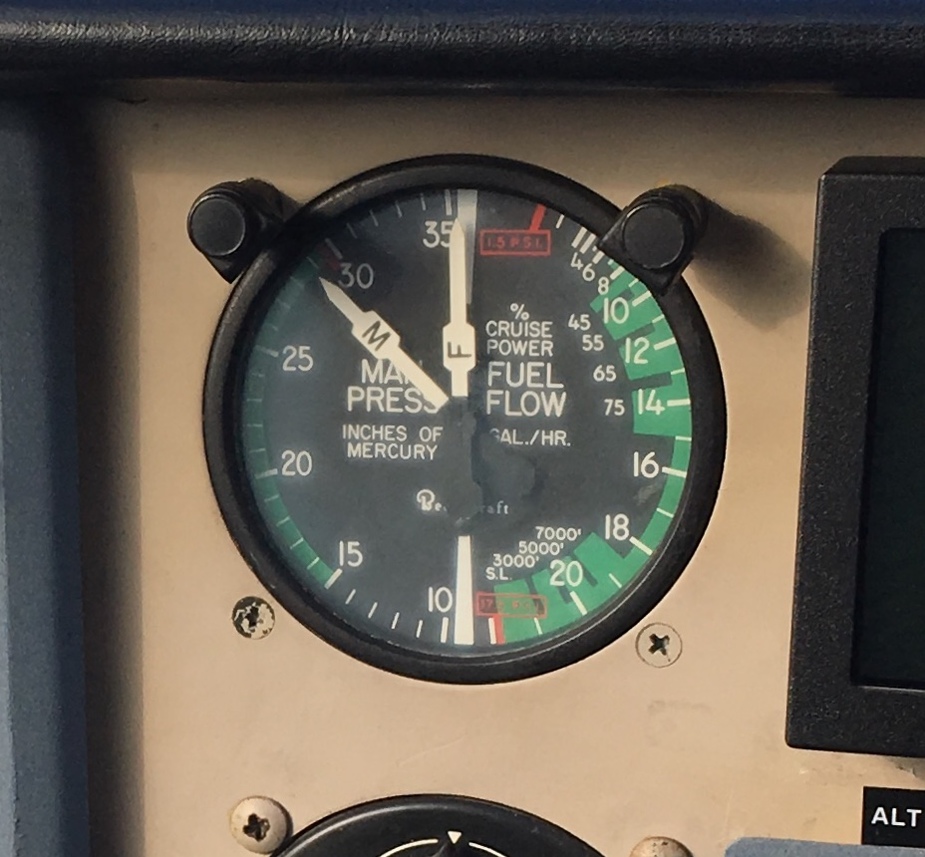 
Well, no, because that might yield anything, depending on how the engine is set up.

I don’t dispute that. But that is how the slides define Target EGT. They say:

Yes, but it goes without saying that they mean „…with a fuel system that is known to be set up correctly…“

Peak EGT does not change much over altitude, normally.

I am not an expert on high DA ops but I thought that the SOP is to – above some altitude e.g. 8000ft at which the power is only 75% which is the max allowed by Lyco for peak EGT – you lean for peak EGT and take off at that mixture setting.

Below 8000ft it will be something else…

That is a different thing, for normal (low altitude) departures. You note the takeoff EGT and lean progressively to maintain that, and that allows a climb to the operating ceiling, with only the mixture being altered. It’s a very neat procedure. But that figure is not peak EGT. It is for an IO540-C4 about 1330F. 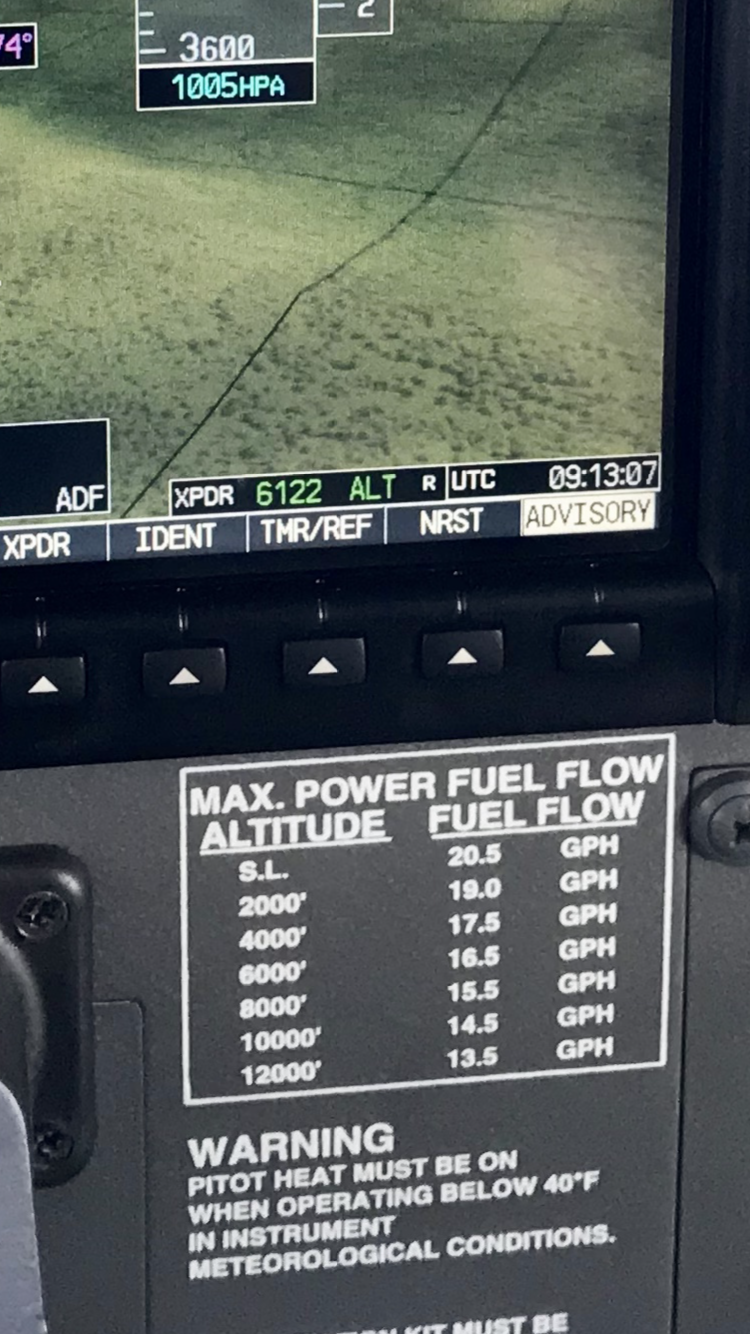 Last Edited by PetitCessnaVoyageur at 26 May 19:42

PetitCessnaVoyageur
LFMA
28 Posts
This thread is locked. This means you can't add a response.
Sign in to add your message