Do forward and rear CG limits depend on mass?

Maybe this should have it’s own thread [ it does now ], but it reminds me of something I’ve been curious about for some time.

In all light aircraft I’ve flown, the rear GC limits have been independent of mass, while the forward GC limit depend on mass. Typically the forward GC limit is constant as mass increases from empty up to a certain point and then starts moving aft so that at MTOM you have a more narrow GC range than you do when the aircraft is empty.

What is the aerodynamical explanation for this?

Surely @Pilot_DAR will be able to give you certification examples and Bill Thompson’s fantastic book as referred here also has a few.

The simple answer is, for an aircraft of classic configuration (ie non-canard) that the elevator/stabilizer has to be able to counter the nose-heavy moment in the worst-case scenarios certified for, typically the landing flare or the take-off rotation at the slower speed ranges. At the same CG position, such moment is proportional to aircraft weight.

A certain pitch control authority equals a certain moment in such worst-case condition which implies that a higher weight means a more aft-displaced forward limit (I hope that makes sense) for the same moment. [Of course the moment is not exactly equal as a higher weight will also increase stall and landing speed hence there is a little more pitch authority in terms of control moment, but you get the idea]

The aft limit, however, is usually a stability (vs authority) restriction, hence typically more weight-independent.

The next question, then, is why the stability restriction is not mass-dependent.

I think it depends on the type and generalising about the aft CG is difficult.

Here Is mine for example. 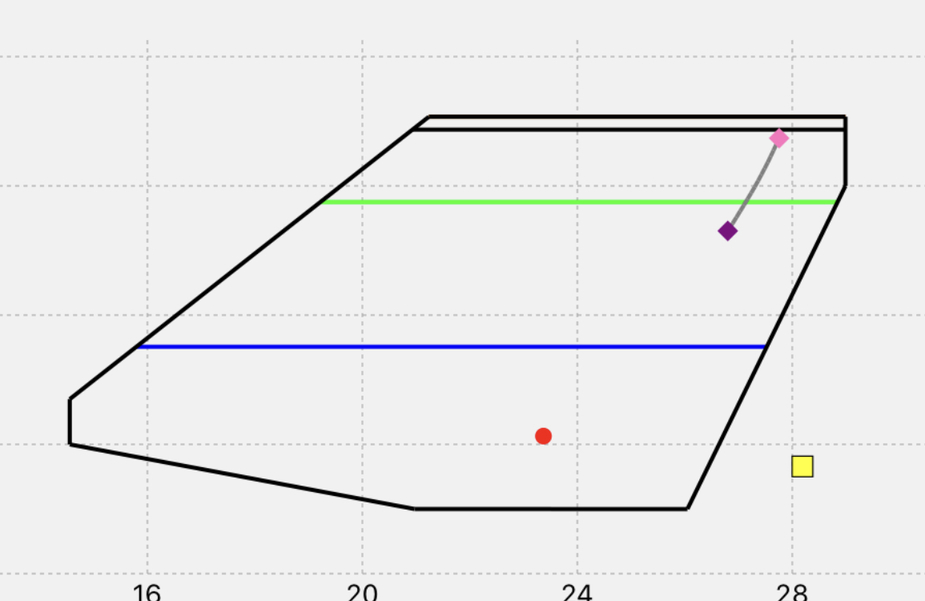 
I think it depends on the type and generalising about the aft CG is difficult.

Indeed, a possible reason for that graph could be that Vmc(a) can increase at lighter weights, as the force contributed by the wing at its maximum allowable bank angle (5degrees) is at its maximum at MTOW, and reduces as weight goes down. If you have a propellers pulling you along this effect might be cancelled out by the p-factor etc. Or the aircraft has a Vmc(g) limit it could be something else again…

I think it depends on the type and generalising about the aft CG is difficult.

True but most of the time the same factors influence the CG limit.
For a light “normal” (I.e. non canard etc…) aircraft, the rear CG limit is placed to be always forward of the aerodynamic force. Otherwise the aircraft is no more stable.
This a pure fluid mechanic consideration and therefore independent from aircraft total mass.

For the most advanced aircraft, other limiting factors come into play like ground handling (nose wheel authority is the one factor I remember).

It’s mostly fuel related, but could also be structural/other limitations IMO. At the start it’s just a straight box, moment on the X axis, mass on the y axis. When fuel burns, the CG changes. If the aircraft is to be flyable with a given payload regardless of fuel load, then the upper corners will be cut off depending on how the fuel changes CG.

I have seen a number of different C of G diagram shapes for GA airplanes. Occasionally, the shape is a rectangle, though as mentioned, more often it is a rectangle with the top left corner cut off. It is common for the aft limit, depicted at the right side of the diagram to be a vertical line.

For my experience validating the C of G limits, in addition to general stability, and pitchdown in a stall, the forward limit will be established based on the ability to raise the nose with elevator (during the flare most importantly), and the aft limit will be established based on recovery from a spin. I’ve had a few airplanes, which after modification, were poor to raise the nose at flair in some configuration. Amphibian conversions of landplanes can suffer this. In some cases, this may result in flap extension limits in certain configurations. For one amphibian conversion I worked on, this deficiency was only made acceptable with the addition of vortex generators under the H stab to improve the elevator effect for pitch up.

It is noteworthy that wing modifications, including STOL kit leading edge cuffs, and wing extensions can negatively affect pitch control where not expected. This can be easy understood by recalling that a wing has a pitching moment, which is opposed by the downforce effect of the H stab. When the wing area is increased, the H stab area should also be increased to offset the increase in pitching moment. However, I have never seen a wing mod, which includes H stab changes, other than the installation of VG’s.

The aft limit will generally be a product of the ability to push the nose down to break the stall in a spin recovery. I was once doing spin recovery testing in a modified Cessna 185 on wheels. Spin recovery was very difficult, requiring sustained full application of nose down, and sometimes adding some power. I deemed it unacceptable, and reported back to the modifier. My experience told me that the mod (a tail boom) would not degrade spin recovery. It turned out that the aft C of G loading had been wrong, and the airplane was loaded 2 inches behind the aft limit. I took a lot more interest in flight test loading after that! When I flew the Cessna Grand Caravan spins, the aft spin recoveries were alarming. Yes, I’d checked the loading myself! After a number of forward C of G test, where the recovery was a vertical dive (kinda exciting in a Caravan!), the aft C of G spins required sustained full nose down. The plane always recovered as required, but it’s un nerving to do have a plane go three quarters around in a spin recovery, with full nose down, and not have the nose go below the horizon!

I have found that C of G, and some loading diagrams, particularly for modified planes have flawed thinking, but it’s usually flawed to be conservative, so that’s okay. But the effects of modifications on airplanes to the C of G are less well understood, and often overlooked as a part of the work package. For this reason, when I fly modified airplanes, I do evaluate them at the W&B extremes.

That is really interesting.

Isn’t it easier to raise the nose during the flare anyway (as compared with doing it higher up) because at that point you are in ground effect?

Doesn’t the elevator authority come into the aft limit also?

On twin engine, rear CG is also limited by the mass as a rear CoG is limiting the Vmc.

greg_mp
LFMD, France
26 Posts
This thread is locked. This means you can't add a response.
Sign in to add your message

Autorouter updates (merged)
Why do Beech Bonanzas have such a strong following?
WnB GC limits considerations for speeds, flaps and gear
What can bring down a 421? (OK-TKF)