We learn from a tabloid magazine that someone took of in marginal conditions from an uncontrolled airfield. The tabloid also mentions, that the national CAA is investigating the alleged incident. We do not know how the FOCA was apprised of this, either by the same “reader reporter” who spilled his beans and pictures to the tabloid or whether they got their information from the paper as well.

From the vantage point of the observer at Hausen Airfield, which was on the tarmac, visibility was very restricted. For pics, see the article. However, a roundshot image taken at approximately the same time looks like this: 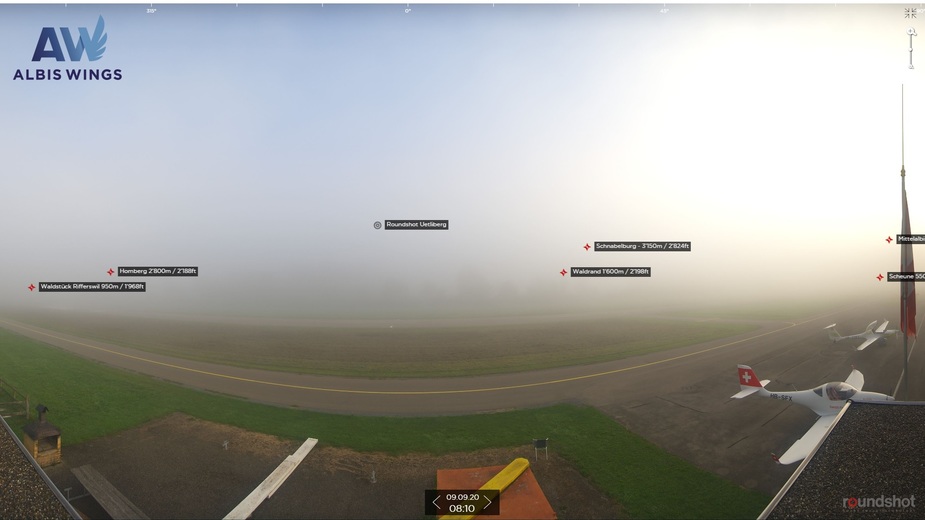 Hausen Airfield is in airspace G. This means, a minimum flight visibility of 1500 m is required along with the requirement to be free of clouds. We do not know how the situation presented itself to the pilot in command who lined up on that runway, but the roundshot pics look a darn sight less dramatic than the footage taken by the “reporter”. It will be very difficult for the FOCA investigators to make themselves a good picture of the real situation and likewise it will be very difficult for the pilot to explain his actions. But failing a proper analysis, one has to assume the pilot knew what he was doing and conditions met or exceeded the requirements for that take off. Looking at the image, I would not exclude that possibility.

However, one has to ask oneself what kind of person will forward damaging material about a fellow pilot to a tabloid magazine, taking into account that not only the pilot himself will get into trouble but that the whole airfield as well as GA itself will be damaged by such kind of reporting. Clearly, the proper way to report such a suspected transgression would be via the appropriate channels to the FOCA and to the aviation club who owns the airplane in question.

Too many idiots with smartphones. It was probably just a low layer of ground fog, and maybe clear after a few feet. I wouldn’t have done it because if there’s an engine problem you’re toast, but this ratting out is a disgrace.

Agree with what’s been said above. Really only the pilot can decide if the conditions were appropriate or not. Cameras and different angles can be very deceiving. Could quite possibly have been 1500m.

Yes the video does not reliably indicate flight visibility.

Does @Regent have any additional familiarity with this matter, beyond what is in the magazine?

This is exactly what the Federal Office for Civil Aviation (Bazl) is now clarifying. The incident is being investigated, it is said on request. Because: The small plane should not have taken off. Bazl spokesman Christian Schubert to BLICK: “For the golf airspace (up to a height of 600 meters, editor’s note) a minimum view of five kilometers and a constant view of the ground is necessary. In addition, the pilot must always be able to turn around and land on the airfield. " And that is precisely what is questionable in the video situation – and dangerous.

In order to clarify the incident, the pilot will now be questioned. He should comment on his dangerous maneuver. If convicted, the fog captain is threatened with a fine up to “temporary or even permanent withdrawal of the flight license”.

Hausen am Albis airfield is also investigating the incident. However, he cannot be held responsible. «It is an uncontrolled airfield in uncontrolled airspace without air traffic control. Accordingly, there is no tower that issues approvals. All road users act on their own responsibility according to visual flight rules, ”the airport informs BLICK upon request. That is common at small airfields.

Is it really true that a return to the same airport must be possible? Where is the reference for that?

Yes probably it was a low layer but there is no way he/she had 1500 m visibility on the ground. From own experience cameras see better though fog than the eye.

Many things could have gone wrong here, animal/human on the runway, another airplane taxiing, engine failure after take off.

Also, I don’t agree the pilot was ratted out, the airplane is barely visible.

It is very dangerous defending such behavior.

Was he VFR or IFR ? If the latter, what’s the legal minimum in EASAland? In the US under Part 91 (non-commercial ops) you can legally take off into zero/zero conditions. Not saying it’s wise and I certainly wouldn’t do it, but legal.

The departure absolute min vis in EU-land is 400m or so, but only if RVR measurement equipment is installed. If not installed, it is pilot interpreted and that is legal.

It used to be zero-zero for an N-reg here too but that ended some years ago.

Ok the guy is a tailwheel pilot, he only need to see 300m to conduct safe takeoff (even rejected or EFATO).but he get reported by the guy who fly DA40 and need 1200m to do the same, so my guess the visibility was around 600m


From own experience cameras see better though fog than the eye.

Well,in the last 20 years that I do this for a living I’ve seen MANY situations where e.g. we had RVR indicated on runways but the whole runway was above 2000 m. I’ve seen it very often that partial fog will cover parts of the field while the rest is open. It is darn clear that the guy with the smartphone was in a very different situation than the Roundshot cam, despite the fact that they were less than 100 m apart.

met vis is something which can vary massively from spot to spot and in direction. From my vantage point I often have the situation that there is 10 km in one direction and 200m in the other. 9999 0200N. Trouble for this whole affair will be, without a skilled observer at the runway end (or high quality video recording) it will be very difficult to determine the actual conditions the pilot saw when lining up for take off. 1500 m is not all that much and it appeared to be a very thin layer (like we also had on that day) with local high variation. Probably fog patches rather than full fog.

Mooney_Driver
LSZH, Switzerland
35 Posts
This thread is locked. This means you can't add a response.
Sign in to add your message