It really depends on the circumstances of the situation. Especially three factors come to mind:
- Are you flying into deteriorating or ameliorating weather, or don’t you know?
- Do you know the area well?
- What’s the visibility? You mentioned 2000m, which is OK if the cloudbase is known to be high enough, but dangerous in combination with low clouds because you don’t see them coming. I would say low cloud and good visibility, or bad visibility with high cloud, is less of a problem, but the combination should be avoided.

And finally, any additional difficulty can become dangerous very quickly. Prime example is of course that you have very limited options for a forced landing if you have engine problems, but also things like fuel planning must be taken even more seriously if you want to survive a bit. Since you have fewer options, your plan B should be really good.

Admittedly Alaska may have more challenging weather and terrain, but was surprised that this safety presentation indicated 24% of UK SE accidents are VFR into IMC. Fatality rate for VFR into IMC is typically 75%, although this one indicates higher.

I thought OP was tongue in cheek, but subsequent posts made me spill my tea, you are all kidding aren you?

- Do you know the area well?

This I think is key. On the very few occasions that I’ve scud run (and to me that means less than 1500ft or <5km viz) the thing that starts to bother me is obstacles. I need to look out intensively to make sure there isn’t a mast here (There are some over 2000ft in France!) which means that I’ve limited time to check the map for obstacles! And of course as you get lower, there is a good chance that they won’t even be on the chart!

A few years ago someone crashed in Ireland after hitting a mast that was erected after the publication of the chart. BeechBaby wrote:

As in all walks of life, lady luck eventually runs out

This is so true. You can only push your luck for so long.

Let me be the devil’s advocate

I think it depends on whether the pilot (and the plane) is instrument-capable, how the flight was planned, and the way the terrain lays.

A lot of people who scud run will kill themselves (via loss of control) upon inadvertent entry into IMC. But some won’t. The UK has a long history of the IMC Rating and if you get a pilot who can instrument fly, and perhaps just – upon capitulation – engages the autopilot and climbs up to /above the MSA, and returns to good wx or lands on an ILS, that worked out OK. In the UK, if you turn up at some ILS, in OVC002, they will let you land with no questions, even in a Tiger Moth, because so many pilots have the IMCR. So there isn’t the pressure to look legal. Non-UK pilots are much less likely to have had the instrument flight exposure.

There is a fundamental problem here:

Let’s say you are flying Shoreham to Headcorn (the thick red line). 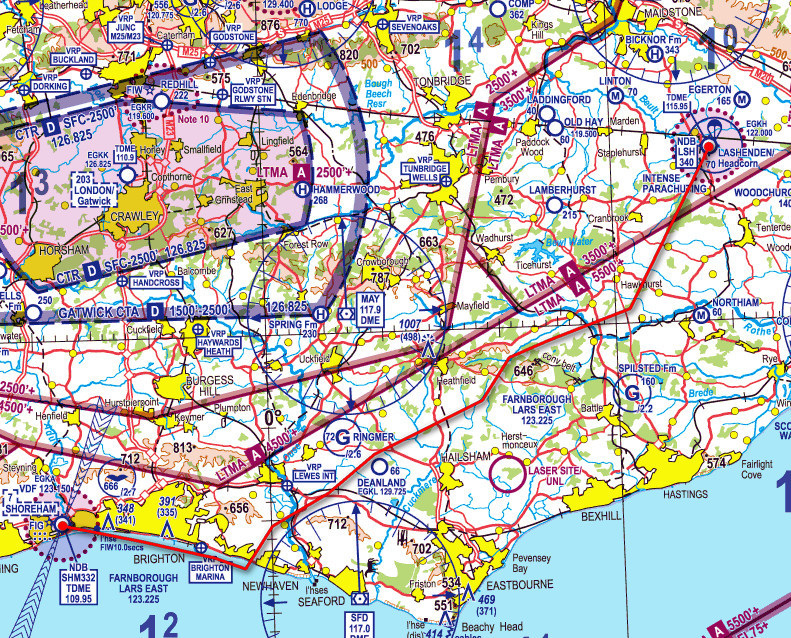 Neither has a real IAP (Shoreham’s IAPs don’t really get you lower than you could legally fly “VFR” all the way in, unless you bust the minima). The flight can be done OCAS as high as 3400ft. But let’s say you climb up to 3400ft and you are in IMC, or VMC on top. Q: How do you get back down? A: (a) Do you have a VFR chart running as a GPS moving map, and I mean a real chart, not some synthetic version, and (b) how big balls have you got? The strictly correct MSA, highest obstacle within 5nm plus 1000ft, is way too high to obey unless the cloudbase is about 3000ft.

So flying below the cloud is the only way to remain VMC. When I fly around the UK, between these sorts of airfields, I fly below the cloud, because as soon as I get up into it, I have the problem of how to get back down safely. I don’t really like DIY descents, especially with data produced by unknown people using unknown methods e.g. the GPS-ILS app.

That route could be flown VMC below a 1000ft cloudbase, maybe lower but I would need to get out the 1:25k map to check that.

And this is because so few GA airfields have instrument approaches and those that have are mostly practically useless. Only the ILS ones offer real ways to get under low cloud.

Recently Redhill tried to get a hard runway, and since they already have full ATC they could trivially get IAPs, and this would have greatly improved the options in SE UK, but they failed in their application. Biggin Hill also objected, obviously because they don’t want the competition! Dog eat dog. (Redhill has vastly better transport connections).

If you were flying to a coastal airport, or one inland but with totally flat terrain between it and the coast e.g. any of these 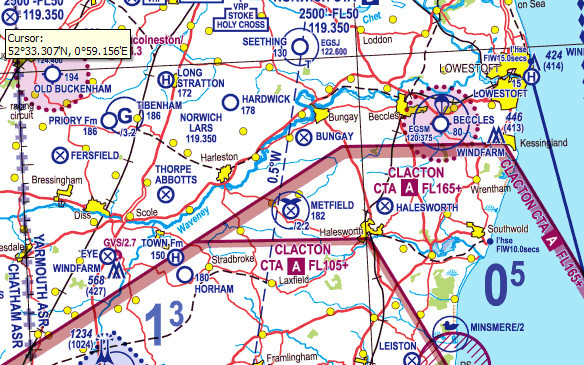 then you could climb to 3400ft, or whatever, and sit there, and descend safely over the sea and fly in at 501ft AGL

In my two years of flying I had to scud run 3 times. The last time was on a flight from Prague to Linz – I ended up in Ceske Budejovice and waited for the weather to clear because the clouds/high-level fog was pushing me way too much down for my taste.
Wouldn’t have done it without proper equipment:
- IFR/IMC experience in a simulator
- moving map with obstacle indication and terrain warning
- backup artificial horizon
- a chute (I flew an UL on that trip)
- no super high antennas in proximity.

Scud running in the alps or any mountainous area is an absolute no go for me. I also very much dislike super high radio/tv antennas like the ones the US is scattered with. It would be foolish to rely on an obstacle database only in that kind of situation.

Scud running in the mountains is crazy, and I would never do that. I leave that to the guys in Alaska.


no super high antennas in proximity.

Other than the one in Lichtenberg, N of Linz, of course…..

I cannot believe people contemplate flying below a 1000ft cloudbase VFR. They must have a death wish. Either get an instrument rating and fly higher or stay on the ground.

It is the sort of flying that works right up until it doesn’t.

I agree with you @JasonC. That’s why I’m going to get my IR ticket next year. It’s just a matter of time when this is going to happen flying VFR cross-country. It happened to me and so far I always decided to land and wait for better weather (which in this case was only 40 minutes).

How are we defining scud running? At 800ft, below a 1000ft cloud base, for a short distance between airports along a coastline, in something slow like a Cub, with known CAVOK behind, is that really dangerous and does it count as scud running? How is that more dangerous than an approach to 200ft minimums at 100+ knots?

The risk factor is significantly reduced if it is an IFR qualified pilot and IFR equipped aircraft, giving the option to climb to MSA at any point if conditions deteriorate.

ortac
151 Posts
This thread is locked. This means you can't add a response.
Sign in to add your message

What is VFR on top? (merged)
I can file!
Probability of getting a shortcut?
TRA (restricted/prohibited area) near Le Touquet LFAT From 2 May to 1 July 2019