Background: For many years I did a page in a Trivia page in a Flying Magazine, so i was always looking for interesting questions. I did thousand of them .. (and I can post some other ones later). Then one day when i started the engine of my Warrior I had an idea who nobody could answer in a satisfying way. I am sure though it will happen today ;-)

WHY is R on the LEFT SIDE of the ignition switch and L on the RIGHT SIDE?

I have really heard all the usual explanations, believe me, but for each of them L-R would have worked just aswell.

The pilot who can convince me will get my Coffee table book “Über München / Above Munich” with 170 aerial pictures of Munich (text in German and English) by mail.

If there actually is a technical reason (not everything has one), then I would think it has to do with how the switch is mechanically constructed and where the impulse coupling of the magneto is located.

But that is not an explanation for why R is on the left side of the switch, right? At least it’s beyond my imagination …

Let me add: I even sent BENDIX who produce most of those switches a letter, years ago but nobody there had a good idea. All the people who could have known were either dead or retired, … or i didn’t find the right one.

Are both magnetos active when you crank? I could be (at least in some installations) that only the one with the impulse coupling is active. And then there would be a mechanical reason in the switch design which one is placed where.

If you look at older Bendix magnetos on google images, they go ‘both, left, right, off’ with the lever, and the legends below the axis of the switch.
e.g. this one, though it isn’t a Bendix: 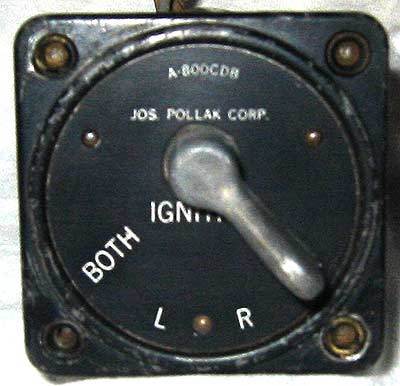 If you look at newer magnetos they seem to go ‘off, right, left, both’ as if someone had simply rotated the legends 180 degrees. At some point, presumably both styles co-existed. Given the inertia of aviation, presumably somebody decided that if you changed the ‘left’ and ‘right’ legends around in the logical manner somebody would miswire the magnetos (presumably the wiring at the back didn’t change), and as a result somebody would get hurt when the engine was hand-started on the wrong magneto and backfired.

Other manufacturers seem to use the more logical arrangement.

Here’s a Bendix one, but as the image comes from Ebay I suspect it may not stay up that long. 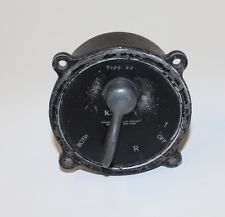 And here’s a modern one: 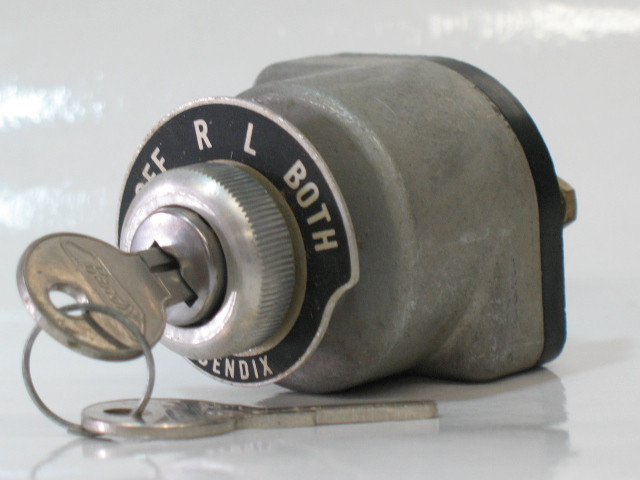 I also find the idea of having ‘on’ to the left of a switch somewhat counter-intuitive. Perhaps they got forced to rationalise their switches when ergonomics was invented, and found it easier to rotate the label than to redesign them.

WOW !!!!
That’s something I NEVER thought about! If they left the internal components of the switch as they were… they had to do it like that! And I bet the internals stayed the same :-)


and found it easier to rotate the label than to redesign them.

They could just have swapped the L and R wires at the switch contacts.

The thing has an inverted logic anyway, off means both L and R contacts conduct, L means the R contact conducts, etc. Maybe that’s where the confusion comes from.

They could just have swapped the L and R wires at the switch contacts.

But the left and right magnetos aren’t identical: the left one traditionally has the impulse coupling.

(edited due to logic error)

I think Achim is right, only one magneto is able to provide impulse during the engine cracking. And traditionally this is the LH magneto. So I would assume only LH is connected when you turn key into start position. But LH being closer to the Start position is not a strong argument, is it?

Could the answer be “no reason”, based on the fact that there are planes with two toggle switches for grounding magnetos, one for left, one for right?

Another suggestion, based on a pdf titled “Magneto Switch Options” by Robert Nuckolls from AeroElectric Connection would be that usually the left magneto has an impulse coupler (for easier startup). The switch,according to the 2002 AOPA article titled “The Magneto Check”, turns off the opposite magneto (i.e. the R setting turns of the left magneto). From that it follows that the L position, which leaves the left magneto running, be closer to the START position (possibly making the switch less complicated inside?).
As a side note, the AeroElectric article suggests an alltogether different layout for the switch as optimal (off, right, both, left, start). I’m likely mistaken, but seem to recall one of the c152’s I flew getting the PPL had this layout…

tmo
EPKP - Kraków, Poland
46 Posts
This thread is locked. This means you can't add a response.
Sign in to add your message