Flying "on the step" - anything in it?

This has come up in a few publications lately…

The assertion is that if you climb slightly above your target altitude and descend down to it, you end up with a higher cruise than if you just climbed up to it.

Obviously I don’t believe this for a moment.

However I have just read a US AOPA mag article about it, and the explanation given for why this effect has been observed is that, on reaching the target altitude, the pilot reduced power too early, before the aircraft speed had stabilised.

I don’t see how this would work – provided a given engine cruise power setting (rpm, fuel flow, mixture) was used at all times. There might well be a difference in the time needed to settle down to the eventual cruise speed (that’s a different question, which may itself be interesting to discuss) but surely the drag curve is monotonic (has no change in the polarity of it’s slope) in the typical SEP cruise regime, so there should not be any possibility of ending up with two different speeds for the same power setting.

That’s one of those “I don’t really think it works, but it can’t do any harm if I try it anyway” things. A bit like crossing one’s fingers or knocking on wood (I would have written “praying” as well but I don’t want to hurt anybody’s religious feelings). When flying piston twins I did it sometimes. Just in case. If there is any observable effect, then it is due to hysteresis in the speed indicator, or pressure transducer in case of electronic indicators.

If it would really work, then Airbus and Boeing would have implemented it in their autopilot software long ago. That would be just a few lines of extra code for gaining a little speed advatage over the competition…

My experience is that if I reduce to cruise power immediately after climbing to target altitude, the aircraft will settle at a lower cruise speed.
So I always keep climb power after leveling off and wait for the IAS to get slightly above my desired cruise speed and reduce to cruise power setting after that.
It will result in a couple of KTS extra airspeed. This is with a DA40.

The theory that was once put forward to me is the for a given polar curve there are two speeds corresponding to the same drag, so in level flight that means two speeds for the same power setting.

I can’t see this coming into play in real life, although Ernest K Gann talks about it in his book “Fate is the hunter”. Mid you he is talking about flying overweight DC3s across the Blue Spruce routes, with a max angle climb to clear the terrain around Bluie West One 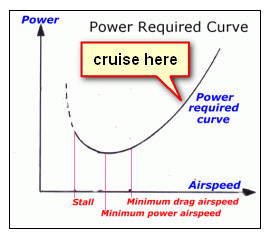 Further back on the curve, it absolutely is possible to have two speeds for the same power setting.

HOWEVER I think that if you are trying to reach the operating ceiling (which ref the DC3 example above could be at some quite low altitude) then obviously you are not in the normal cruise regime. You are by definition approaching Vs. So then it is possible. And such a situation (i.e. ending up flying the lower of the two speeds) is not ever going to recover itself. You will be flying the lower speed for ever, until you dip the nose down, and pick up a bit of speed, and move yourself onto the other part of the curve.

The reason why Airbus etc won’t have that feature in their autopilots is that while they may sometimes climb at the optimal Vx or Vy figure (I read somewhere that an Airbus can outclimb a Boeing because the Airbus is able to climb right on the edge of the stall buffet) they have loads of excess power when they come to level off at the end of such a climb.

At the ceiling in the Mustang if it is warm, the engines are struggling and you can’t always push out of the higher AoA regime to get to normal cruise speed. You leave power in CLB detent until you stop accelerating then back to CRU. If you pull back too early you may never get to your cruising speed.

I’m with Adam…. It will not result in a different cruise speed…it’s a conservation of energy thing….Dave Hirschman did a mythbusters experiment:

But as a technique for getting setup at TOC I prefer to go say 50-100’ above and then descend to get to speed rather than let the speed build up asymptotically….


The theory that was once put forward to me is the for a given polar curve there are two speeds corresponding to the same drag, so in level flight that means two speeds for the same power setting.

I can’t see this coming into play in real life, although Ernest K Gann talks about it in his book “Fate is the hunter”. Mid you he is talking about flying overweight DC3s across the Blue Spruce routes, with a max angle climb to clear the terrain around Bluie West One

I’ve read (on this forum I believe) about a jet in the US that crashed on a positioning flight. The crew wanted to climb to the certified ceiling just for fun (and in violation of company SOPs). On reaching the ceiling altitude, they failed to accelerate, stalled and crashed. IIRC from reading the accident report the problem was exactly that the climb speed was on the wrong side of the power curve.

Airborne_Again
ESKC (Uppsala/Sundbro), Sweden
100 Posts
This thread is locked. This means you can't add a response.
Sign in to add your message