The most reliable way to do a forced landing? High Key / Low Key

Another thing to add in this context: Slipping is a great tool on short final in case of being too high! I also use it for that purpose on normal approaches. Even the emergency landing with the B767 in Canada https://en.wikipedia.org/wiki/Gimli_Glider had a good outcome because of the skills of the captain as a former glider pilot.

“As the runway drew near, it became apparent that the aircraft was coming in too high and fast, raising the danger of running off the runway before it could be stopped. The lack of hydraulic pressure prevented flap/slat extension that would have, under normal landing conditions, reduced the stall speed of the aircraft and increased the lift coefficient of the wings to allow the aircraft to be slowed for a safe landing. The pilots briefly considered a 360-degree turn to reduce speed and altitude, but decided that they did not have enough altitude for the manoeuvre. Pearson decided to execute a forward slip to increase drag and lose altitude. This manoeuvre is commonly used with gliders and light aircraft to descend more quickly without increasing forward speed.”


how do you achieve the 2000ft (or whatever is desired) if you are gliding down from some greater altitude?

1. “direct to” nearest airfield, courtesy of your GPS
2. being overhead, a) set altimeter to QNH, b) check altitude of airfield c) quick calculation what you need to get to 2000ft AGL
3. “squares” of 1000ft or 500ft legs until there

That’s what I would do… the good thing is, you have plenty of time if you are at 10k or above. You may even select a longer runway than strictly the nearest. 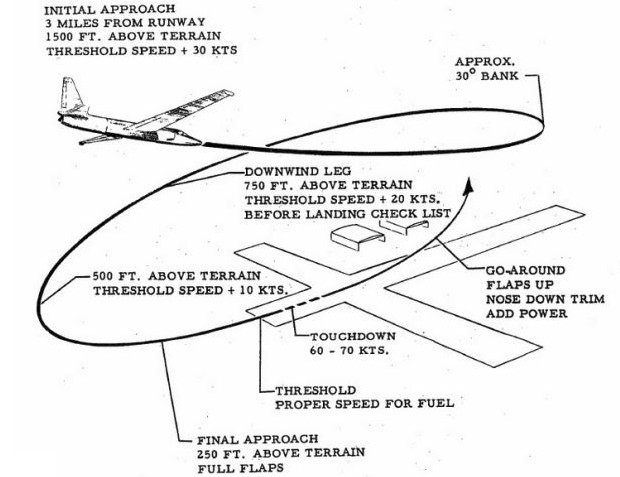 The go-around is also a bit optimistic, in case of an engine failure.


how do you achieve the 2000ft (or whatever is desired) if you are gliding down from some greater altitude?

In my experience, you don’t. I have had one dead stick landing. The engine quit on the Pawnee when descending from a long and high glider tow. My plan was to do a normal downwind-base.final, thought I had all the alt in the world, but when on early downwind, I was too low, and had to divert to a downwind landing. Two steep almost 180 degree turns to get on something that looked like a final, and sideslipping on “final” did the trick. What saved me in the end was pure seat of the pants stick and rudder skills, as well as being lucky enough to reach the strip at all in the first place.

I think that high key, low key is easily trainable, controlled and verifiable. That makes it successful, at least in a training environment. I also think that a windmilling prop vs idle prop are so different in drag characteristics they will offset the “feeling” enough to nullify some of the “feeling aspects” of the training. But to have a clear cut strategy must be useful no matter what.

The RAF teaching for Tutor single engine fixed wing is 2500-3000ft for hi key and 1500ft for low key. They are just an approximate height gates to help people build judgement to get from a typical medium level operating height to the glide circuit and landing position, while keeping the field in sight and adjustment options in hand.

If engine failure occurs at a higher altitude it obviously gives you more time for diagnosis, forced landing prep etc or an abandonment decision in our case! You would also attempt to either reach a more desirable landing area or runway if possible. The point is that once you’ve drifted down to 2500ft ish you need to select and maintain a field (and adopt the pattern) rather than continuing to drift aimlessly around or try and pursue an unrealistic option out of glide range.


Wow, I understand a little bit that one should be able to judge height by your eyes to a certain extent but that seems a bit exaggerated. The altimeter will not fail when the engine does…

OTOH you might not know the exact terrain elevation so even if the altimeter works, it might not be of much use.


OTOH you might not know the exact terrain elevation so even if the altimeter works, it might not be of much use.

That was part of the FE’s reasoning. It was a good point for me, a pilot who never overflew terrain higher than 100ft AMSL during training and thus used to the altimeter always giving AGL values.

I was taught a mix up of high/low key and constant aspect.

When I’m flying a PFL, my goal is never to end up on a straight final, always to be turning gradually with a constant aspect view.

If you are always turning, you can tighten/loosen the turn in order to make a perfect touchdown.

Once you are on a straight final you only have slipping, no other tools.

You also have S turns. Very effective and any type can do them safely.

Mostly due to local airspace and flat terrain, the VFR pilots here probably fly below 1400 ft GND 90+% of the time. So training to descend to arrive overhead at 2000 ft GND would be less useful compared to the more targeted engine-failure training we do. We train pilots to make S-turns to arrive downwind abeam “threshold” at 800-1000 ft GND, and from there perform an almost standard power-off final approach to the selected spot.

I agree that the altimeter should not be used for training final approaches, neither normal approaches nor emergency ones.

huv
EKRK, Denmark
103 Posts
This thread is locked. This means you can't add a response.
Sign in to add your message