Unfortunately most VFR flyers believe that VFR flight should be below the cloud, and that leads to various dangers

I partially agree because I’ve met a few PPL pilots who haven’t even heard about VFR-over-the-top and who didn’t know flying above cloud is legal in their country and under what conditions.

On the other hand, I have the knowledge and still, most long distance VFR flights will be below cloud because there isn’t very many opportunities to fly a long distance above a cloud layer. Especially if it’s an overcast and you cannot be sure about higher tops further ahead.. If those catch you, you may run out of options (for long distance, a 180 will not be possible because where will you go? All the way back? Do you have enough fuel for that?).

Hence, I will fly over the top only if very certain that it works in the end, or for short distances or if it’s scattered rather than overcast…


because there isn’t very many opportunities to fly a long distance above a cloud layer. Especially if it’s an overcast and you cannot be sure about higher tops further ahead.. If those catch you, you may run out of options (for long distance, a 180 will not be possible because where will you go?

The weather reporting & forecasting tools (short list above) out there are very reliable when it comes to ceilings & tops.

That said, when doing so, I carry very large fuel reserves, often enough to return home !

Is ‘never cross a front in a GA plane’ a good rule of thumb?

You can fly under them and – short of lightning – you are fine if you maintain VMC. The tafs and metars should forecast the cloudbase, more or less… it’s what they are paid for!

You can fly above them, and the height will depend on the front. Warm fronts are worse IME, with tops FL200-250 and thus not crossable VMC in most non turbo planes. Also they tend to have low cloudbases – 500ft is common. Cold front tops vary according to the conditions. I have crossed them at FL150, just seeing the ridge of the front below, protruding through the general layer. And some fronts are not anything at all. In Europe you usually need an IR to get cleared to go high enough. I tend to not worry about crossing cold fronts which have little or no pressure gradient across them e.g. 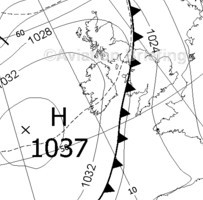 but always use the IR image to judge the tops.


>>The flight path is certainly more consistent with an engine failure than a CFIT or loss of control.

Continuous descent until impact, with a rate of descent that looks consistent with a low or no power descent.

It may well be the case that the descent led into IMC, or that there was a loss of control in the last few seconds.

This does not look like the typical scud running gone bad, like the one in France recently. These ones tend to be horizontal flight or descents into terrain, maybe with a last-few-seconds attempt to climb or turn, rather than a continuous climb to a few 1,000 ft above the terrain followed by a continuous descent towards nowhere in particular.


even (or especially!) sex

Lots of people die or are injured by sex? I must live a boring life.

Over hilly terrain in IMC, last thing I would do is descend. They initially climbed as well. Next they start descending. Descent visible on FR is about 4 minutes. That’s a long time. No abrupt loss of control, spin, etc.


Then they start descending. Initially speed rises, but later it gets down to 98kt. Then they regain some speed (126 kt max), but descent continues.

A 1000 fpm descent for several minutes in hilly terrain does seem like an engine problem. Google tells me that best glide speed for a M20K is 87 knots. According to the METAR posted earlier, winds at altitude would most likely be southerly and they were flying on a mainly northerly heading — but the winds would need to be about 30 kts to account for the GS according to FR24.

We lose too many people to wx accidents because PPL training is unsuitable for the use to which the privilege is put, by the small % of people who actually get off their backside and do something interesting with their bit of paper.

True. So the question arises if we need to modify the Ppl syllabus or restrict the privileges of a conventional Ppl holder to local flights in CAVOK until he has passed a number of hours and then add a rating for being allowed to actually travel.

It is clear that flight planning and Meteo is insufficient the way it is taught. There is nothing in the syllabus that I know of which prepares a new PPL for trips like the ones we are mostly talking about here.

Also alpine flying is not taught at all in most cases nor do most 100$ burger pilots need it.

Food for thought but I am sure that anyone suggesting these things will be accused of ruining GA… So it is up to those who wish to fly responsibly to teach themselfs?


A 1000 fpm descent for several minutes in hilly terrain does seem like an engine problem.

I don’t have my usual data with me, but the question arises to me more and more what could cause an engine to fail so short before the arrival at the destination.

It has been said before that with 3 on board the fuel load they could carry would be around 50 USG. That is what the C’s capacity is. The flight distance would have been around 500 NM great circle, which for a 252 at 7000 ft would probably be around 3 hours, they actually were in the air for 3:13. Fuel to climb to altitude would be 2-3 gallons, then 3 hours at 12.8 USG would be around 40 USG. That would mean about 10 USG remaining, which is not that much, but enough to cause the fire.

Seeing as they took off at 10.18 they should have had the 2nd one issued at 0800z. BKN012 is IMC for controlled aispace already, but the TS were predicted later than 15z, which was obviously wrong as the crash occurred apparently around 13:40 UTC.

In any case, this was unflyable, the TAF should have told them that much even though it was inaccurate in terms of when the bad weather would hit, but BKN012 is alone No Go.

Mooney_Driver
LSZH, Switzerland
165 Posts
This thread is locked. This means you can't add a response.
Sign in to add your message

Action against a pilot for a breach of Schengen
Are GA flights with multiple pilots more dangerous than single-pilot flights?
M20K 252 D-EISE crash in Bergamo
M20K down in Saarbrücken (CDA v. D&D etc)