UK CAS transit "application" by email (or web, or ICAO flight plan) - how crazy is this?

Silvaire, you must understand that London is much busier than SoCal. Also it´s more complicated airspace.

Man, if the LA area was treated like this you had to fly 20 miles offshore to transit. Thankfully it´s not. The FAA even publishes the appropriate sector frequencies and encourages pilots to call ATC.

I am surprised that no one from the world of ATC has commented. I am sure Peter can tell us if there a few such on this forum.

Many UK ATCOs read EuroGA but almost none of them post. Especially not NATS employees. I suspect the main reason is NATS politics and confidentiality (non participation on forums) requirements. One well known senior guy posts on one UK site, running two characters, one as official NATS, and one used to post the more rude stuff

But you won’t get a NATS ATCO openly criticising anything from NATS, not even under a nickname.

I would like to believe that any ATCO would also think this is nuts. Not only it is contrary to all international practice, but also it usurps the ATCO’s options for tactical traffic management which is what his job is after all! In my past contacts with UK ATCOs, they were pretty negative about initiatives such as PRNAV, for the latter reason.

This is in the last “Clued Up” magazine 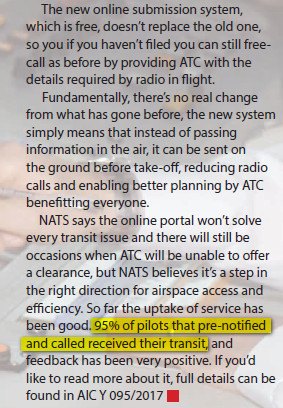 What it doesn’t say is whether 95% would have got a transit anyway. I can’t believe that, in the absence of traffic, the ATCO will refuse a transit if he didn’t get your email, just to drive the point home. This isn’t like here asking for a departure clearance in English after the airfield has gone FR-only.

It’s fair enough I think that the NATS-employed ATCOs won’t comment on it.

Criticising your employer in public is a fairly good way to get fired, and anyone working for a large-ish company will probably have a generic clause in their employment contract prohibiting unauthorised comment on the activities of the company in any public media.

I heard it was designed to reduce the time ATCOs spent creating e-strips in response to pop-up transit requests. Apparently the system isn’t very user friendly, and creating a new strip for an unexpected aircraft takes longer than it did with paper strips. Fair enough – NATS management have sought controller feedback on the e-strip system and this is something identified as a problem. As a proposed solution, they say we’ll get people to notify in advance and then the strips can be pre-made and waiting for you – if they turn up then use them, if they don’t then no problem.

Also suspect that things like this which start out as a trial are usually intended to become mandatory. Run it for a bit, declare it such a success that it becomes mandatory. I’m deliberately not using it and I’ve still never been refused a transit. Not that I really trust NATS to be truthful with the data and/or release everything relevant, but I’m hoping that if people continue to transit without pre-notifying then the data will show that controllers are still managing to fit us in on an ad-hoc basis so there’s no need to make it mandatory.

If it did become mandatory, there would probably be some merit in complaining to the CAA that NATS were exceeding the authority granted to them over said airspace by making it completely inaccessible without pre-booking.

If it did become mandatory, there would probably be some merit in complaining to the CAA that NATS were exceeding the authority granted to them over said airspace by making it completely inaccessible without pre-booking.

Yes; exactly, but they must also know this! Everybody knows this is contrary to standard aviation practice of asking for a CAS transit using the radio. So why did this mad proposal come out at all?

Maybe this is to protect a new generation of shy, retiring controllers who are too self-conscious to talk much on the radio?


So why did this mad proposal come out at all?

I guess the controllers don’t like having to prepare new e-strips on the fly so they’re looking for a solution whereby they can be pre-produced.

So why did this mad proposal come out at all?

Technical constraints and having many ANSPs who don’t have a unified technological interface to talk to each other.

The ideal would be to file a VFR flight plan using the normal mechanism, or abbreviated flight plan over the radio, and it would automatically end up with all interested units along your route.

This topic has popped up again on UK social media. It is now via a website – here.

Surprisingly a lot of UK pilots think it is great, but I think that is just the particular community which lives on the internet.

Peter
Administrator
Shoreham EGKA, United Kingdom
93 Posts
This thread is locked. This means you can't add a response.
Sign in to add your message

Squawk Conspicuity
Flight plan addressing
The UK fear of "airways"
UK LARS service - how can it be improved?