Has anyone wondered why the pipes running from the fuel distribution spider (on top of the engine) to the fuel injectors are so thin, and unprotected? 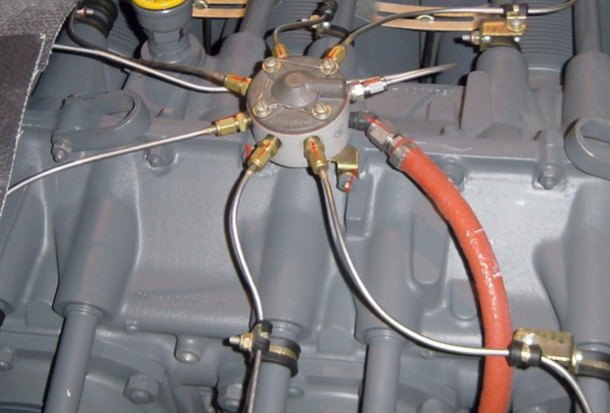 They seem to be asking to freeze up, in say -30C airflow.

Avgas itself won't freeze above about -55C but any water in it will.

A few years ago some pilots were going to do flight tests to see how much of a temperature drop occurs across that length of pipe. I will try to find out what they found.

There is one high-activity pilot forum personality (not here) who says his Aztec is guaranteed to get a double engine failure below (from memory) -15C, so he uses PRIST below that. I tried to find out whether his fuel system is somehow peculiar but no info could be found. I am fairly sure such a plane could never be Part 23 certified... but Avgas should not freeze at -15C unless it is full of water, surely?

I've flown the TB20 in -30C for hours, with no additive, but nowadays I tend to chuck in 0.5% IPA for cross-Alps flights, simply because the stuff costs almost nothing and unlike PRIST is not carcinogenic.

Does it really matter whether the fuel pipes are exposed to a -30C airflow or just -30C ambient temperature?

I do use IPA in the Cessna for mostly religious reasons, but nowadays never in my cars. And it can get even colder than -30C up here.

Does it really matter whether the fuel pipes are exposed to a -30C airflow or just -30C ambient temperature?

Yes; massively so if one is looking at a warmer liquid flowing through the pipe at a finite speed.

Let's say the ambient is a -30C still air, and the fuel enters at -10C (more or less the fuel tank contents temperature, since the pre-fuel-injection pipework is all protected from the airflow).

After a few seconds the whole pipe will warm up to -10C, minus a tiny bit for the heat loss across the 20K gradient due to conduction, convection and radiation. The pipe will reach -10C pretty well I think because the specific heat capacity of avgas is far greater than the aforementioned losses.

But if the -30C airflow is at 150kt then the fuel has a lot more work to do to keep the pipe warm.

I am sure there are ways to calculate all this, for plausible values of pipe ID, fuel flow velocity, fuel specific heat, thermal conductivity of the stainless steel, etc, etc. Maybe somebody here knows how to work it out? There will be a lot of missing data though e.g. the drop along the pipe from the tank to the fuel distributor might not be insignificant.

One slightly worrying aspect is that you may be OK at cruise power but if you reduce power a lot for a descent, the fuel flow will reduce and the stuff is then more likely to freeze.

A while ago I met a pilot who used to fly a piston twin, frequently on business, between the UK and Ireland. Can't remember the type - a Baron perhaps? It was prob99 pressurised since he got a double failure at FL250, with both engines restarting at 2000ft above the water, in the middle of the Irish sea. He never flew it again. He sold it immediately and bought a King Air

Those would have been Continentals, presumably.

Edit: there are some online calculators for the process industries - example. None of the ones I found seem usable for such a tiny pipe, but one can use the aforementioned one to see how the airflow speed affects the heat loss, by selecting the smallest possible pipe (0.5 inch), some insulation, and then looking at the Bare Pipe figures at the bottom. For a 40F gradient, increasing the airflow from zero to 150kt increases the losses from 14.5 BTU/h/ft to 467 BTU/h/ft. At 15kt it is 114 BTU/h/ft so clearly not proportional which is what one would expect (boundary layer etc). That is for a 0.5" (12.7mm) pipe and I would expect the losses for the ~4mm pipe used on the engine to be much more dramatic, because fuel mass (volume) flow is the square of the diameter so a bigger pipe will suffer relatively less.

Also I have not found any calculator which will yield the actual temperature of the pipe along its length, which will obviously be a gradient starting at the inlet fuel temperature and asymptotically approaching the airflow temperature if the pipe is long enough.

What this calls for is a flight test with some tiny PT100 sensors attached in the right places, and logging the data through the climb to a decent altitude, which ought to allow the loss to be modelled afterwards.

What if your temperature gradient (fuel to ambient) is zero?

Meaning fill it up in the evening, let the plane sit outdoors over a winter cold night in Scandinavia and get going in the morning? The fuel temperature will be -30C. And it's also standard practice around here. Ok, IPA does get added.

If the surface temp is -30C and the fuel temp is -30C then you might get fuel system icing even before going flying, if there is water in the fuel.

If you then get airborne then as you climb it would normally get even colder, so the scenario is the same.

I have no idea whether with a -30C SFC temp you will still get the ISA lapse rate but if you did then your avgas will freeze totally at about FL140 (-58C) even if it is perfectly pure and, presumably, even if IPA or PRIST have been added because these work by absorbing the water, only.

That's on the assumption that the exposed ends of the fuel system do cool down all the way to ambient, which I am sure they don't, but they will cool a bit.

I suppose it's possible that radiation heating from the engine actually warms up those little pipes, but I very much doubt it because the conduction/convection losses to the airflow must vastly exceed the radiation gain from the engine underneath.

I vaguely recall reading somewhere that the distribution spider, shown in the above photo bolted to the top of the engine, gets warmed significantly by the engine, and it's possible that the exact way that component is mounted affects the suspectibility to fuel icing.

I have been flying the Cirrus at FL240 at around -40 degrees or a little colder. The POH limits flight to not less than -40 degrees and seemingly the engine did not stop running :-)

If AVGAS freezes at -58 degrees orso, I think that most of us would be flying outside the limitations of their POH. Strangely enough, since I am working on my jet prop conversion I looked it up in the PA46 jetprop manual, but I cannot find a minimum temp for flying specified in the POH. And then, the Jetprop flies on Jet-A1 which might have yet another freezing point.

I looked it up in the PA46 jetprop manual, but I cannot find a minimum temp for flying specified in the POH.

Isn't the JET A1 fuel heated in the PA46? That's how it works on the Diamond DA40 TDI... Fuel is taken from the main tank, heated and flows back into the auxiliary tank, from where you pump it into the main tank.

I remember once on a cold winter day I was waiting like 20 minutes on the ground with the engine running before the fuel temperature was sufficient for take off...

Fuel is heated in the Meridian below a certain temperature. The Jetprop has a header tank behind the engine which effectively heats the fuel before being fed to the FCU. Jet-A1 has a much warmer gelling point than Avgas so is more susceptible to cold temps. Jet-a is worse again. Will look up the limitations but it is a fuel temp limitation not an OAT limitation.

Has anyone wondered why the pipes running from the fuel distribution spider (on top of the engine) to the fuel injectors are so thin, and unprotected?

I'd suggest that in fact they're made thin to help avoid freezing - on the basis that if you move the fuel quickly to the injectors it doesn't have time enough to freeze unless it's already very close to freezing temperature. A very rough calculation, assuming an internal radius of 2mm and a 500mm length of pipe, with a 12L/hr (or 2L/hr per cylinder) fuel flow leads to a transit time of less than 2 minutes from the distribution spider to the injectors.Conversely, the rate of flow in an infinitely large radius pipe would be negligible and the fuel would have time ample time to cool to ambient temperature.

Rotax 912s also use the idea that if you move the fuel quickly enough through the system it doesn't have time enough to come to ambient temperature - except that in these the constant rapid fuel movement via the fuel return pipe stops the fuel getting too hot (and causing the Mogas to get vapour lock).

I suspect that although water freezes at exactly 0c, water when in a minute concentration mixed with Avgas requires a much lower temperature to cause it to crystallise out.

Also, maybe if it does actually freeze the frozen particles will be so small they pass through the injectors harmlessly.

After all, how much water really is there dissolved in the Avgas?

Neil
Darley Moor, Gamston (UK)
59 Posts
This thread is locked. This means you can't add a response.
Sign in to add your message