Daher sells Prist for 28 Euros a can. It’s shipped as hazardous goods, which is very expensive. Self pickup is possible.


Self pickup is possible.

Thanks for that, I assume you mean from Tarbes, do you have a contact ?

The only place I have seen in it Europe is Wick.

Many thanks, will do.

Maybe it will give me an opportunity to have another tour of the factory ….. what really impressed me was the milling machine turning out the spars, you can see where the money goes.

This is a sticker on the Piper M600 turboprop 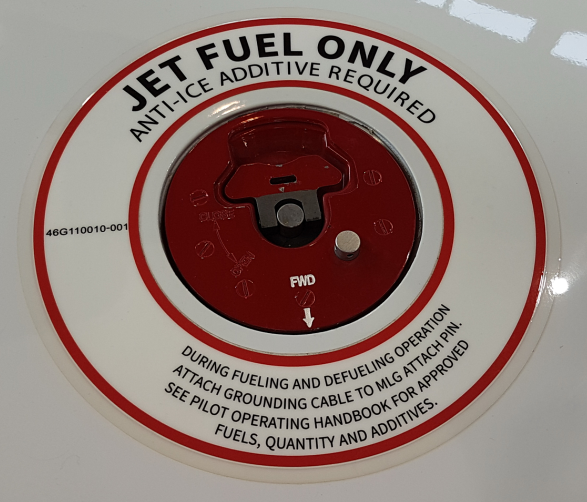 Same on PC-12s, Citations and many others. The fuel gets so cold up there so there is high risk of it freezing(heard it becomes like wax) and clotting.

You need some sort of heat exchanger close to the tanks to certify it without the additive.

It says anti-ice, not anti-wax ?

To prevent water in the fuel from freezing. Additive mixes with water and lowers its freezing point. If you refuel a TBM in pouring rain, don’t cover the hole, don’t add Prist and fly up to F310, you can be pretty sure that FUEL PRESS will come up and AUX BOOST PMP will switch on. Not something you want in a single-engine plane.

I know pilots who don’t add Prist. That is only until the first occurrence of what I described above. But if you’re careful with refueling, it may never happen.

In the TBM there’s also a fuel filter bypass, which pops out and shows red color. One is supposed to check it during pre-flight. If it pops, fuel isn’t filtered.
There’s also an oil-fuel heat exchanger that heats the fuel, but that is after the fuel filter.


Not something you want in a single-engine plane

Nor in a twin, given that if fuel for one engine ices up, the other one is likely to do the same, assuming the respective tanks were refuelled the same way with the same fuel.

A few years back, there was a helicopter having a flame-out because no additive was added (happened in Switzerland). I read the report back then and according to the manufacturer additive was required when flying at OATs below 4.44°C (in flight, of course not just on the ground).

From the report:
“WARNING: AT TEMPERATURES BELOW+40°f (4.44°C) SOME TYPE OF FUEL
ICING PROTECTION IS REQUIRED, SUCH AS AN ANTI-ICING ADDITIVE OR A
MEANS OF AIRCRAFT FUEL ICE ELIMINATION. ENGINE FLAMEOUT COULD
RESULT FROM FAILURE TO USE FUEL ICING CONDITIONS”

I’m guessing this is exactly the same thing with some turboprop airplanes.

ArcticChiller
LSAS
59 Posts
This thread is locked. This means you can't add a response.
Sign in to add your message

Cover for tanking in rain
One-person tent for carrying in a plane
Bulgaria in an AvGas aircraft
About Refueling, Jerry Cans and Bonding