GPS jamming and spoofing and relying on GPS (merged)

It's even easier to spoof ILS signals. That's why ILS signals are monitored, and that's why GPS signals should be monitored on airports offering LPV or "GLS" approaches to ILS minima as well...

Aren't all radio aids used in aviation vulnerable to spoofing? here is no form of authentication between the aircraft and a DME either.

A NDB can be spoofed with any shortwave transmitter, which you could buy on ebay for less then 100$...

The article says you need line of sight access to the target.

In that case all bets are off - you could jam or spoof anything (that isn't encrypted).

That this is possible has always been known. See e.g. the Volpe report on GPS vulnerability. It's about 10 years old. It's assumed the military have always had this capability, and it's not suprising that somebody has built a box which can do it at close range.

Things like VORs are harder to spoof because much more power is needed, and anyway nobody uses them as the navigation source nowadays.

You could spoof a DME, for sure. It's a matter of relative signal strength. If you set 109.95 (the Shoreham EGKA DME) and fly near Caen LFRK, you pick up a solid reading, but it isn't EGKA's. It's somebody else's. As you fly north, that unknown DME gets weaker and eventually Shoreham's DME comes up, at about 85D (assuming FL100+) i.e. still over France, but apart from the morse ident, and the reading matching what your GPS is showing on a DCT EGKA, and the DME-derived ground speed (how many pilots watch that one) you would never know the difference. And airliners use mostly DME/DME to fix up their INS errors...

This is precisely why I fly with tin foil on my head... and line the doors with lead before I leave :)

Seriously, though what is the likely hood that GPS, VOR, NDE, DME etc can be all jammed at the same time? Because I know many pilots who do follow a pretty pink line, but I do like to cross check GPS with a VOR and an NDB when available...

They are highly reliable pieces of kit granted... but I work in a "Critical Reliability" environment, especially where EEE components are concerned and have seen my fair share of issues and errors in RF signals in this environment. That is with even the strictest QA controls... I just don't so single source for my navigation.

Resolving conflicts in the data can be interesting. But thankfully I haven't had to do that yet...

I just don't think this is an issue in reality - assuming the pilot is actually awake.

If you do a crude GPS jam, the GPS will flag a loss of signal and you will see it. The autopilot will drop out and fall back to ROL (wings level) so you will probably engage HDG (heading hold).

The heading comes from a fluxgate magnetometer 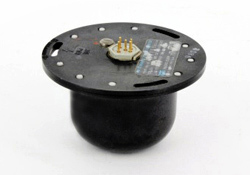 (which would be awfully hard to jam or spoof - you would need to suppress or move the earth's magnetic field) and is stabilised with a gyro (mechanical or AHRS).

So you have a stable heading no matter what happens.

Any GPS spoofing would need to be pretty clever because it would need to be done such that you get a very gradual lateral track shift, so the heading remains apparently reasonably constant.

It would be much easier to jam a drone because they will just be tracking the GPS track from A to B, but a human pilot ought to notice that something is not adding up. You will have the heading bug on the HSI pointing way off your track, etc...

I've had two GPS failures so far. One in 2004, in the middle of the Adriatic off Italy, for a few mins, and one in 2006, departing from Padova in Italy. Both were total, and obvious.

The coolest thing about this article is the fact that this professor and his students went to the Ionian Sea end of June, beginning of July - the best holiday season, not too hot yet, but the water warm enough to swimming - to conduct their test on board an 80M$ yacht (what's so important about the price of this yacht that they keep repeating that figure all the time?) :-) Looks like a free holiday for everybody at the expense of their university. They could have performed the exact same test in their lab or using road vehicles or model helicopters on their campus.

...but a human pilot ought to notice that something is not adding up. You will have the heading bug on the HSI pointing way off your track, etc...

No not really, because you will attribute that difference in track and heading to the wind. Which is computed by the same GPS or FMS unit and displayed in the corner of your screen, so the overall display will always make sense. You might notice it at some time, but probably only comment it in the sense of "now look at that wind: totally different from the forecast!".

The only solution are multi-sensor systems as implemented in FMS units. Satellite navigation, backed with DME/DME, INS, Loran (not much else left unfortunately).

No not really, because you will attribute that difference in track and heading to the wind. Which is computed by the same GPS or FMS unit and displayed in the corner of your screen, so the overall display will always make sense. You might notice it at some time, but probably only comment it in the sense of "now look at that wind: totally different from the forecast!".

It's a matter of degree (no pun intended)...

In the IFR/CAS environment, ATC will spot it fast and will be on your case. So this is really a Class G / CAS busting scenario, and I think to really make a chunk of UK GA suddenly appear overhead LHR you would need more than a 10 degree error. And it will affect only those flying non-radio.

You could get a FOG stabilised GPS box for about €20k (uncertified). I don't see they will come down much soon. Probably 1 degree per hour drift. NMEA output...

I agree they did pick a very unpleasant location

But look at any international development conference - they are all rigged to be in very agreeable places. Nowadays, for political correctness, they tend to be in the 3rd world, which means it has to be in a really expensive hotel because anybody stepping outside the door holding an Iphone is going to get robbed.

You could get a FOG stabilised GPS box for about €20k (uncertified). I don't see they will come down much soon. Probably 1 degree per hour drift.

But maybe that precision is not really necessary if you only want to detect GPS spoofing! All you need is a sensor whose drift is smaller than the rate at which a spoofer would falsify your GPS position. You would not get a correct postion but an alert that something might be wrong with your GPS reception. And this is really all you need in the beginning.

what next
EDDS - Stuttgart
Tumbleweed
15153

Which is why it has always been traditional to have entirely independent systems so that cross checking is possible. If you put all your eggs in the same basket, don't be surprised when you finish up with an omelette!

Tumbleweed
216 Posts
This thread is locked. This means you can't add a response.
Sign in to add your message