Where an aircraft has a "ground power" plug wired, then when using this (from a car battery for example) to start the aircraft which has a flat battery, where should the master switches be set please? I have had conflicting advice such as "battery master on" and "both switches on" etc. Your views would be appreciated. Thanks

Your views would be appreciated. Thanks

This is not about views! Do exactly what the POH or your aircraft tells you, otherwise you risk expensive damage.

There was the famous crash of a DA 42 at Speyer/EDRY in March 2007 that had a dual simultaneous engine failure right after takeoff (due to low voltage failure of the FADEC system) after a ground power start with the alternator switches in the wrong position.

what next
EDDS - Stuttgart
achimha
7875

Unless the POH contains a specific procedure, I would jump start with the electrical system off, then activate the alternator, then the onboard battery. However, only if I really have to fly with a depleted battery and don't have the time to properly charge it.

As stated, read the POH.

Or better still get the electrical schematics and have a look at how it is wired.

Even in the TB20, there is some very different wiring across the airframe serial number ranges.

However, it would suprise me if one could operate the starter motor with the electrics master switch OFF.

One should definitely do any starting with the avionics master switch OFF, to protect the avionics from spikes from the starter motor inductance.

Most aircraft which have a dedicated external ground power receptacle have a relay which will bypass the electrical master switch and thus power the main bus. You will see all the non avionics stuff power up as soon as you plug in the cord with the master off. For this system the master switch says off until you disconnect.

For those systems without the relay you usually have to leave the master on to get power to the aircraft. In any case check the POH for the specific serial number of your aircraft.

The PA-46 has the relay system and ground power will power the main bus immediately.

Most aircraft which have a dedicated external ground power receptacle have a relay which will bypass the electrical master switch and thus power the main bus. You will see all the non avionics stuff power up as soon as you plug in the cord with the master off. For this system the master switch says off until you disconnect.

I have that "ground power" relay (TB20GT) but it basically just disconnects the battery so the battery doesn't get charged when external power is connected. One still has to operate the master switch to get stuff to come on 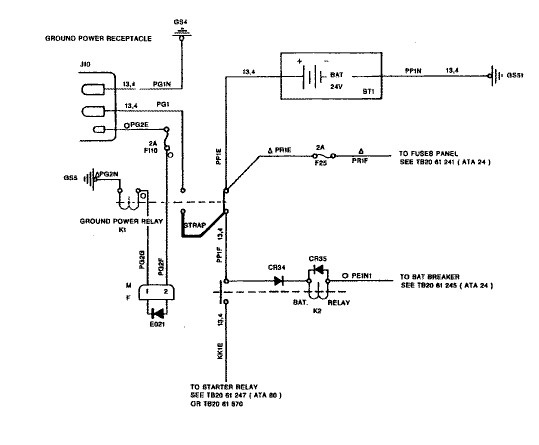 But as I say this stuff is highly variable from type to type and even on the same airframe type.

As said, read the POH.

Peter My Comanche had to be started with the master switch off as the battery had to remain off line, all other electrics did work. Once all was running the ex. power had to be disconnected and master switch was turned 'on' bringing the battery on line. Every aircraft is different.

Thanks for the advice one and all. The difficulty arises when one goes to recover an aircraft and there is no POH or if there is and the system is not listed then what? Achima I have not before heard that view about running with a flat battery. Perhaps we rely too much on elecronics and not enough on flying skills. Perhaps it is also very dependant on where you are in the world. The aircraft in question did start without ground power so the question became entirely academic. Good advice from one and all.

I once had a flat battery in my Piper Dakota. The drill is to power the aircraft through the external plug with the master off. I only had a small car as a power source and it was clearly not sufficient to crank the big engine through the external plug. I let the car charge the Piper's battery for five minutes, then switched on the master - against the POH procedure - and with the two combined (car and Piper battery) I managed to start the Lycoming. I did study the wiring (afterwards) and did not find a good reason why it should not be done like that.

This winter I had the same problem and handpropped it. I'd rather avoid both methods and just charge the battery with a low amp charger as someone else suggested, but it is not always an option. Besides - for some reason it is more difficult to slow charge many aircarft's batteries than it is to supply ground power for a "jump" start, because hte battery does not charge through the external power plug, but has to be accessed directly.

I strongly support that one should never take off with an only partly charged battery, especially IFR or at night. I learned that the hard way - have written about that in another thread.

huv
EKRK, Denmark
105 Posts
This thread is locked. This means you can't add a response.
Sign in to add your message