Because it doesn’t matter. What can get you into trouble is if your altimeter and transponder differ.

Yes, I have had this before a number of years ago. It turned out that the static line to the transponder had got pinched

An interesting snippet on how the CAIT infringement detection software works, from the latest MOR listings:

Somebody got busted for the Manchester low level route (SFC-1300ft) at 1400ft, amid heavy ATC interaction with various squawks issued, bad wx, etc. Reading the list of events it was a miracle how well he did, hand flying as he was in rough wx.

Various 100ft cases including a pilot with TAS who climbed 100ft into CAS out of Biggin while acting on a Garmin TAS traffic warning. He got MORd; outcome unknown. However he was told to depart only “IFR” in the future! Not obvious how that will help…

Then an infringement of the LTMA (base 2500ft) by a TB9 climbing to 2600ft resulting in a loss of separation with a TBM700 descending through 4000ft!

There is a rather daft case of someone doing a tail strike in a C182 at Tresco EGHT (which is mostly a heliport) and the result is that C182 ops have been banned at Tresco. Perhaps when someone does a gear up in a TB20, all TB20 ops should be banned everywhere? Another daft MOR was an SR22 which taxied to the wrong point, with no safety issue, at Guernsey.

I am wondering if perhaps we are seeing a lot of people in the system needing to get a life?

There is a rather daft case of someone doing a tail strike in a C182 at Tresco EGHT (which is mostly a heliport) and the result is that C182 ops have been banned at Tresco. Perhaps when someone does a gear up in a TB20, all TB20 ops should be banned everywhere?

Tresco is only 350 metres with a public footpath bang in the middle!

The October bust numbers are up in the usual place 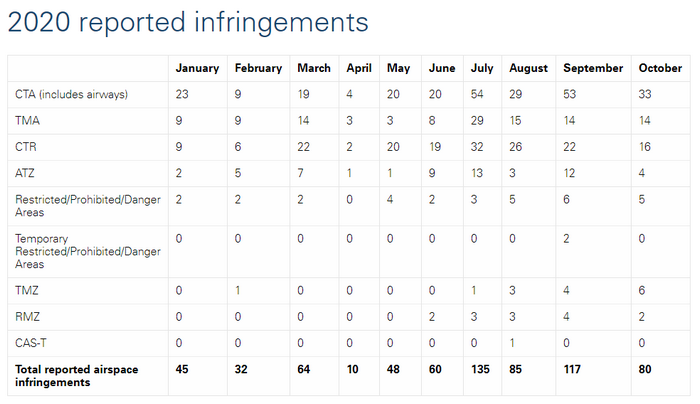 TMA busts are same as September, and since these are the most aggressively persecuted category (CAIT software detects you in seconds, 100% MORs, high chance of it being a “high risk” due to the +5000ft/5nm artificial cylinder created) it is obvious that the new CAA policy to smash GA infringers with a hammer is having absolutely zero effect. Time to disband the ex RAF ATC re-employment scheme at Aviation House (I am sure they could all get jobs at Uavionix, joining a number of their former colleagues already in there

) and bring back something sensible.

CTR and CTA are also detected by CAIT and that number is down from last month.
But more importantly, comparing stats between 2 month and concluding the the CAA policy has no effect is very unscientific.

Just been out for a 1hr bike ride and heard just 1 plane flying. Sunday. Normally it would be dozens.

So I think it is fair to say that – to a first order approximation at least – the policy is doing nothing whatsoever. Well, it has increased the % of Mode A targets on TCAS 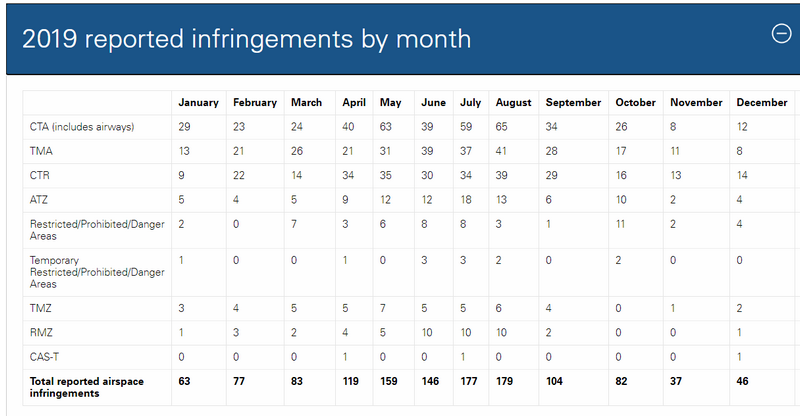 Meanwhile in Poland FIS now give clearances to cross TMA if a flight plan is filed. In reality I believe they just have a block agreement with Approach, who sit one floor down, but getting “climb to FL95, expect to be cleared FL115 shortly” when opening a flight plan with them is great. Above FL95 Warsaw Radar didn’t know who we were or where we were going, so they cleared us “direct destination” and 1h later “descend at your own discretion”. On the way back, descending from FL105 we were in and out of controlled airspace at least 3 times, clipping the layers of the TMA wedding cake; Approach couldn’t care less, Info was too busy with people telling him their life story, ended up calling the ARO by phone to close out our FPL.


But more importantly, comparing stats between 2 month and concluding the the CAA policy has no effect is very unscientific.

I dont think anyone is saying that. You only have to look at the official figures over the last few years comparing similar months and looking at the breakdown of different airspace infringement types. This CAA policy has been in place for long enough now that something should be happening to the numbers if it was working. The only reductions were during the months that GA was restricted. I only hope no one has the bright idea to say the solution to infringements is to stop GA flying…

I am afraid I see no evidence over a long period it is working, but, more to the point, the CAA should be telling us it is working (or not). They are silent.

Very disappointing that a regulator would seem to have so little interest in examaning and reviewing the success of their policy – thank goodness they arent responsible for aviation safety.

Perhaps a letter to your relevant minister is in order, asking if a post implementation review has been carried out into the success or otherwise of this procedure?

If not does he intend to ask the caa to carry out such a review?

Sometimes asking questions get better results than making accusations! Especially if the person you are asking can distance themselves from blame by pushing it down the line!

dublinpilot
EIKH Kilrush
2876 Posts
This thread is locked. This means you can't add a response.
Sign in to add your message