and at the bottom of page 4 I read:

Only 5% of those having infringed then re-infringe, demonstrating the value of the Just Culture process.

Which is only valid if more than 5% of the pilot population infringe over a comparable period, e.g. a couple of years?

If, as I imagine, less than 5% of the pilot population infringe over a comparable period, then either:

Those who infringe were always more likely* (i.e. more than 5% chance) to infringe than the pilot population, and are now less likely to, or
infringers are representative of the pilot population and the CAA process actually makes them more likely to re-infringe than before!
I guess the CAA’s position is #1, but they really should show the comparable!

Note * “More likely” doesn’t imply they were all idiots, it could just reflect the insanely complicated airspace they fly in.

The relatively straightforward statistical point you raise, which none of us need to be a statistician to understand or observe as obvious, just shows the poor critical reasoning skills of the people at the CAA writing this stuff.

Only 5% of those having infringed then re-infringe, demonstrating the value of the Just Culture process.

Which is only valid if more than 5% of the pilot population infringe over a comparable period, e.g. a couple of years?

Exactly. That 5% means nothing unless comparing to the entire flying GA population as a whole over a set period of time, which they obviously have not done. The ignorance here is really rather unbelievable, I would say criminal (seriously).

Besides, 5% is a large number. Let’s say the entire population is 1000 pilots, just to have a number. On average a GA pilot fly 20 h per year maybe, again just to have a number, and the average flight is 1h. Let’s also assume that the 5% is over a period of a year, and that the average “first time infringement” number is 10% within the same year (just to give that ex-RAF procedure some validity

This means the average population who infringes (100 pilots), infringes in 1 flight of 20. These 100 are then subjected to the ex-RAF procedure, but 5 of them still infringes some time after. Let’s say within the next year.

Now, to get a better number than the puny 5% improvement, the only way is to assume more than 10% of the population infringes as “first time infringers” within any given year. Let’s say that a whopping 50% of the entire population are first time infringers, and are subjected to the procedure. The next year we have 500 pilots where 50% infringes, and 500 pilots where 5% infringes, which is 275, or an improvement of 45%. Now, 45% improvement is something, but:

The thing is though, the best you can hope for after the procedure has been going on indefinitely is that 5% of the entire flying GA population will infringe the next year. Meaning everyone is subjected to the procedure every second year on average (each 40 h), and with no hope of improvements. This is the only meaningful interpretation of “Only 5% of those having infringed then re-infringe, demonstrating the value of the Just Culture process”.

Very early in my flying days, I fringed twice.

First incident.
I infringed Dublin CTR. It was my intension to transit the Dublin CTR and I’d filed a flight plan for it. I’d done this a number of times previously both by myself and with an instructor. Previously the proceedure was contacting the area controller, who allocated a squwak, and as they saw me on radar approaching the CTR they transferred me to the tower to get my entry clearance. On this occasion I got a squawk but the controller never handed me over. I started to get nervous about my position as I felt I must be very close to the boundary (no GPS at the time) and asked the controller if I needed to now contact the tower. They told me to contact the tower, who immediately told me that I’d infringed.

Lesson learn’t. Never rely on the controller to hand me over, and don’t assume that a squwak code means that the controller is looking after me. (This incident made me unwilling to accept implied clearances in France, and I alway check that I’m cleared into the next airspace).

Second incident (shortly after I got a GPS) was probably only a few months after the first incident and was my first visit to an airport where the destination had controlled airspace. The controller told me to “report 10 DME” and to expect a right base to the runway. I assumed that the report was just a report and “expect a right base” meant that I was cleared to positon for that. But in fact the “report 10 DME” was to remind the controller to clear me into the zone at that point (the zone was a 10nm circle around the airport). As I came up to 10 DME someone else was on the radio, and I unded up reporting 9 DME. Lesson learnt. Unless the controller says “cleared to ….” I’m not cleared to xxx. No other phrase or wording gives me that clearance.

I’ve not infringed in the subsequent 19 years of flying. Well maybe one technicality. I was told by a controller, after I asked them, that a certain piece of airspace was not active and I could enter it. But it turns out that airspace had just gone active without notification and they weren’t yet aware of that.

The point is that I learnt from both of these incidents. Making the infringements and learning from them, made me less likely to infringe again. No authority was involved in either incident, no rebuke from the authority, no nasty letter, no training course.

The infringements aren’t going down. They are in nearly all cases a product of pilot distraction.

The gasco “course” has no effect; it is mostly an embarrassing joke which was set up to feed revenue to old ex RAF mates of the ex RAF old chums in the CAA/NATS.

There is also no Just Culture involved.

The only way to reduce infringments is to reduce flying activity, but if you say on your report to CAA/NATS, in the box on how you propose to avoid this happening again, that you aren’t going to fly with distracting passengers (etc) or are going to stick to flights which can be flown fully programmed on the autopilot and at a single level, they will send you straight to gasco because your attitude obviously needs correcting.

On Monday, I knew Tain Range was active, so didn’t go near it. They’re very good for allowing circuits at Dornoch, within the range, while they replace gunnery targets. An N reg, Scottish voice, Cirrus came on Inverness frequency, out of Dornoch.
Soon Inverness told him they’d had a phone call from Tain and a MOR had been submitted as the range was active. He said an aircraft had been doing circuits. Probably legally, with permission, and on the Range frequency.

This is a comical waste of public money (from here but that link is very short-lived). 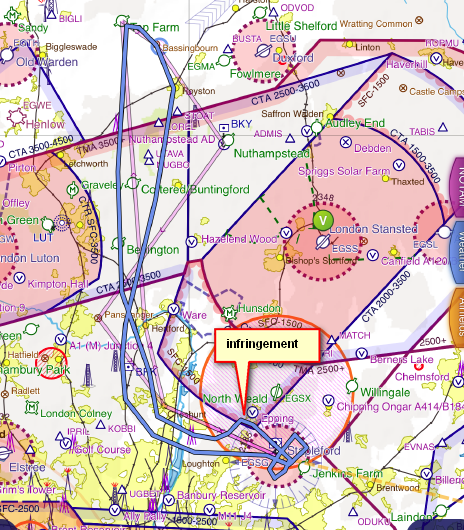 Interesting that the CAA have spent some money converting their radar trace into the SkyDemon format that we’re all familar with.

The word is they are asking infringers to supply their SD log. I saw one of the letters they sent to somebody. I was most surprised they were asking for that data. In the past they would typically-arrogantly just bust you with their own radar data.

Presumably because they discovered that pilots are able to get off getting busted if their GPS log shows they didn’t infringe.

I would guess an infringement of that minor magnitude into adjacent Class B occurs every single day to a flight departing from my US base, ignored by radar equipped ATC. Probably ten per day. They go after the ones that actually matter, and even in that case I doubt a long winded written report is produced. In most cases the enforcement action would be a short phone call, and in a few of the most blatant it would be a face to face meeting to make sure the guy isn’t past it or whatever.

The extent of the report and investigation in relation to the barely visible airspace infraction is Pythonesque nuttiness.

What is the default position logging interval on SD?

The trace above isn’t radar – the steps are too big. Which makes one wonder: why didn’t the CAA publish the radar trace? Let me guess. It would show a significant discrepancy between itself and the SD track, and – regardless of whether it is in the context of an infringement or not – once that gets in the media it will open up a big can of worms.

Peter
Administrator
Shoreham EGKA, United Kingdom
3104 Posts
This thread is locked. This means you can't add a response.
Sign in to add your message