within 5 miles and 5000’ of the edge of the zone.
That means that any infringement is likely to result in a loss of separation

Those are the numbers which the late Dave Philips posted, which were contradicted by some others IIRC, and yes, exactly, as I have been saying, that aspect of the system is set up to make sure there is an official “loss of separation” upon a large % of incidents.

Hugely interesting to see that 5000ft/5nm is the current UK add-on.

No other country operates the 5000ft bit. It is self evidently ridiculous. Going around in circles here, but given that the system is completely happy to use the exact and unverified Mode C altitude to determine a CAS “bust”, why add 5000ft to it afterwards to determine an official “loss of separation” which leads to the ATCO to be “locked in a dark room to recover”? It’s madness. They should use 1000ft like most others.

Of course there are airspace busts in France, I do not have a clue how many. I believe most minor busts are dealt with through the REX system and sometimes result in discussions within an aero club with the CFI or in annual instructors meetings some recommendations are given to pass on to pilots in general through the clubs. Of course not every strategy works.
The only REX I have read recently which I thought, on first reading was heavy handed was that of an instructor and student on a nav. The route was from Paris to the coast and return via Abbeville LFOI. There were two students and an instructor in the aircraft, and on turning for Abbeville the instructor was distracted for a few moments and the student inadvertently entered ‘P’ airspace. As soon as the instructor realised they left the zone and landed at Abbeville where they received a , message that they should wait there until the Air Gendarmes arrived.Two hours later the instructor and student were receiving a “talking to:)” before being sent on their way, or they would have done (if I remember correctly) if night hadn’t intervened and their base airport had no lights.

Timothy – again, no doubt very on message, and indeed well written, but it deflects from answering the question – does it solve the problem?

As I suggested before, various strategies over the years, but the rate of infrigements has remained unchanged.

This policy has been in place for a short while. Is there any evidence that it is having the desired effect? I hate to pre-empt, but I guess the answer will be, it is to short a period of time.

but when will enough time have elapsed, and if every infringement is now being reported, but was not reported in the past, how do you eliminate the very real danger that the numbers are massaged to fit the charge for many years to come? (Albeit interestingly there may be a shot in the foot here, because the very time the changes in policy have been introduced, the number of infrigments increase!)


Together with the CAIT detection tool, and a rule for ATCOs to report 100% of busts, and NATS policy to send 100% of the reports to the CAA, it is like having a 30mph speed limit enforced at 30.1mph. Then, on current rules, 4 busts in 3 years gives you a 6 month driving ban. Detection is with a device fitted to the car which auto reports to the police. This would cause an uproar of course, but its de facto result would be that the 30mph limit would be something like 20-25mph. Many people would give up driving.

Actually, CAIT is apparently worse than that, it’s an instance of what the author Philip K Dick called “pre-crime” and will label someone as an infringer before they even infringe. It’s more like a speed camera that gives you a ticket in a 30 zone while doing 25 mph because at your current rate of acceleration, in 10 seconds time you’ll be doing 30.1 mph, in other words it’s actually “negative tolerance” rather than zero tolerance. Or to use Timothy’s example of running a red light, if you get penalty points on your license because you approached the traffic light greater than some arbitrary speed that’s still below the speed limit, but still stopped before the red light. From here local copy page 4:

“There are also a fair number of cases where the CAIT and the reporting have been rather a “nonevent”, for example people failing to get to the correct altitude by 200’ a mile from a shelf. In these cases there has been no real danger, and the inconvenience caused to ATC and CAT is only as a result of CAIT effectively producing a “False Positive”. There should be some mechanism to prevent a minor problem being turned into a major incident simply because the software lacks discretion.”

How many cases are a “fair number of cases” isn’t said, and CAIT may have received some updates and bugfixes since then which stops it from doing this. Asking this question (what percentage of infringers didn’t actually infringe, and whether CAIT has been updated to not do this any more) of the CAA would certainly be a worthy FOIA request.


“The present CAS bust policy means that the UK TMAs are several nm bigger all around and perhaps 1000ft lower everywhere, and once this gets well known, loads of pilots will give up flying.”

Basically to avoid an accidental infringement you have to plan your flight to be further away from CAS so a moments inattention won’t get you a prosecution.

The official recommendation is TAKE2 – 2nm from CAS and at least 200 feet vertically. The problem with TAKE2 (or any such approach) is it results in the effective closure of certain pieces of airspace (there’s plenty of pinch points, and places like the Manchester LLR go from 4.5nm wide and 1250ft ceiling to 0.5nm wide and 1050 ft ceiling, increasing the risk of GA-on-GA mid air collision. However it’s sound advice away from airspace pinch points and VFR corridors.

Looking at this from a slighly different perspective the course is for some clearly very useful and enjoyable. For others it is a significant cost and inconvenience, which we are told is not the intention.

How do the airlines and the CAA deal with this?

Well, as we have read, the controller is taken off duty, debriefed by his employer and presumably re-educated as required. The same is true of most airlines. The pilot will have some in house retraining. The CAA entrust this work to the organisation, because presumably they consider it effective.

Ah, I hear you say, the GA network does not have that bubble of oversight!

We know most infrigments occur in the south east. We also know that most pilots actually dont go far. So who knows the local airspace better? That woudl be the local instructors and examiners – in fact like the back of their hands. Who actually flys this airspace day in day out – ah yes, that would be the local instructors and examiners. How many hours do the “instructors” on the course have in the south east I wonder? I bet not as many as the local boys on the block.

We also know that there is nothing like practising learning. Study after study has shown this to be true. Whats better, a dusty room in an hotel, or an hour with an instructor specifically reviewing the matter in hand?

and then we are putting some funds back into exactly the people that desrve them, not a charity who wont tell us why they are accumulating funds beyond what they say is their own remitt.

I have to say it so please forgive me, but it suggests a certian nepotism, does it not?

We trust the airlines, we trust NATS, but we cant trust the very structure that is in place to train every GA pilot in the country, and ensure the preservation of standards. Yet both the CAA is on record as saying in every other aspect of safety GA has never been so good. Strange, in every other area, the instructors and examiners are doing such a good job, but airspace infringement is a step too far?

and then there is the matter of convenience. Is the course also a stick, because for some their is the cost and the inconvenience? How does this compare with the convenience of retraining during your working day at the cost of your employer in the case of the airlines and NATS, and the convenience of a pilot having a review with an instructor at his local airfield arranged between the two, and which he would need to do anyway?

To me it makes a great deal more sense, and more to the point, addresses the problem from the very grass roots upwards. Unless of course we dont trust our instructors? 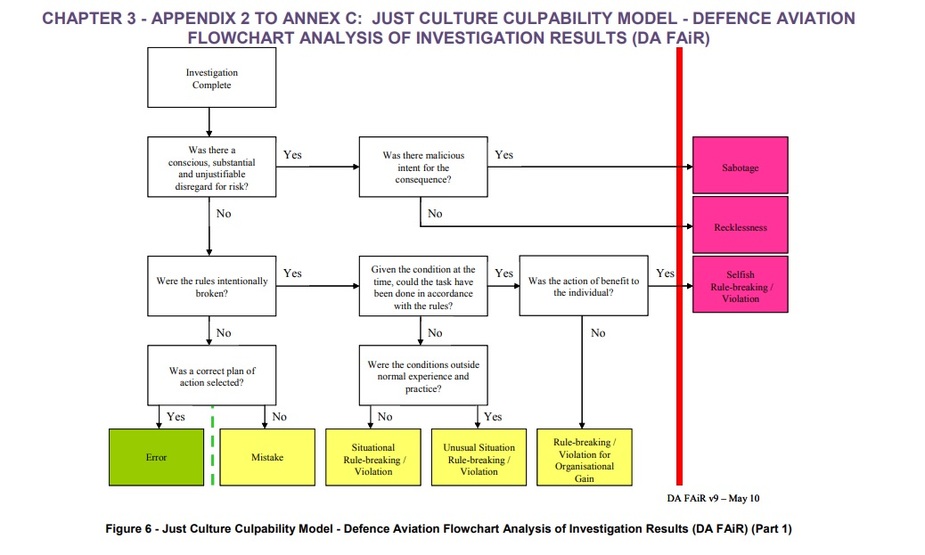 @Timothy discussed about intent vs outcomes (if I can summarise it like that) and I think the way we do air safety investigations in the military is very interesting in this regard. We use the FAIR tool as shown (this is open source from the MAA website) and the culpability line is quite difficult to cross – I would say most airborne infringements would come out to be Error or Mistake, with some of other high profile / eye opening ones we hear about being Recklessness


Unless of course we don’t trust our instructors?

Instructors are responsible for a very substantial minority of infringements.

It’s unnecessarily emotive to talk about “not trusting our instructors.” Think about the newspaper headline we discussed on the phone yesterday. Some instructors are better than others. It’s very easy to become an instructor, particularly a CRI.

Yes, almost all of them. There are probably one or two deliberate infringements per year, with the intention of overall risk reduction (eg below MSA in cloud, risk of collision). There are also occasional Maurice Kirk characters who just don’t believe in rules and decide to do what they want, but they are such an exception that no meaningful conclusion can be drawn.

Hence, the obvious Q: how come that the present “head of CAS busts”, being ex Royal Air Force ATC and, as reported here, holds a PPL, is running such a draconian system, which no other country in Europe has implemented?

Why is the UK the odd one out?

It can’t be the airspace (Belgium, France, Italy, etc, have much more obscure structures, sometimes to the point of being almost impossible to visualise vertically, and being usable only via very low flying, ATC letting almost everyone through without a formal “clearance”, turning off transponders, GA dying out in favour of under-the-radar UL flying etc).

It can’t be the traffic (Brussels, Munich, Milano, etc keep ATC working just as flat out – I flew around these parts IFR in past 3 days).

It can’t be PPL training (it is of dubious quality everywhere, unless you just want to turn out pilots who fly around in circles around their club runway; actually the UK, along with Germany, has by far the most pilots who “go places”, with some major-GA countries having negligible foreign touring).

So why is the UK so screwed up?

Obviously, the other countries’ CAAs have looked at this topic too, because every country gets thousands of busts a year. They have concluded that draconian measures are not required.

Incidentally, I am willing to put money on most Gasco “delegates” having been using a GPS perfectly well…

Peter
Administrator
Shoreham EGKA, United Kingdom
3034 Posts
This thread is locked. This means you can't add a response.
Sign in to add your message