these young people, flying around the world. The video series where great, I loved to watch them, but they where sometimes quite unprepared and clueless, including some risky situations

Like carrying a 10k$ DSLR in an aircraft while overflying restricted area?
(I am sure young people will get away with this, they use live IPhone/Instagram and if they get arrested they have 10m followers to protest

BTW, what happened with that crowdfunding project?

I posted a Q here on how one could determine the German Customs interpretation of “brexit date”.

Today, following video was recommended to me by the Google algorithm. I thought it would also be quite interesting for this topic. Its now proven that not only air traffic gets issues with German customs, also if you don’t cross the Swiss-German border via an official border crossing by car, you need to import your car as well. At least according to the initial opinion of the German customs.

The video explains the following situation: A German winemaker needs to drive 100 m on a small road through Swiss terriroty, on his way from/to his German vineyard. On a random day, the German customs stopped him for importing illegally his car into Germany on the parcticulair road, so he had to pay 494,40 euros as import fee for his old Volkswagen. German customs insisted on the fact that the winemaker acted with conditional Intent. In the end, after the efforts of German TV, the winemaker will get his money back.

Here the entire video in German:

14k has been raised for this pilot – pretty amazing! 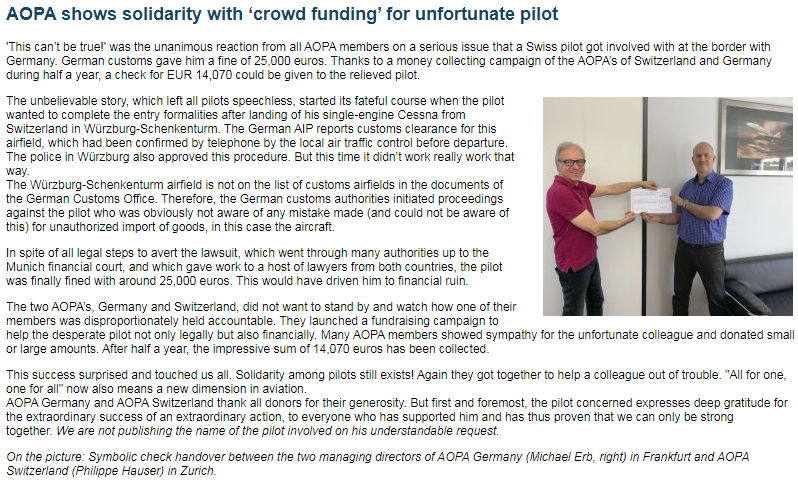 I expected they would mange to raise a little more. But not bad.

What happened to the guy’s plane?

Did he pay the fine and recover the plane?

I think it was a rental. I have not heard of anything, so I suspect nothing particular happened with it. Remember all this got going only way after he had returned to Switzerland. This was in 2015.


I think it was a rental.

Yes it was, Birrfeld I think.

Interesting that German TV intervened to help the wine-grower get his money back but didn’t do the same for the pilot…. anti-aviation bias?

During Aero Friedrichshafen many people have walked between Kostanz and Kreuzlingen with a bunch of valuables in their backpacks without passing any official border crossing with customs. Is that illegal then? If not, how is it different from the cases described previously? If yes, why do they let it happen?

Dimme
ESME, ESMS
389 Posts
This thread is locked. This means you can't add a response.
Sign in to add your message