Should we set up a Spotters of Spotters website?

A passenger suggested this recently when we taxied in after landing, to a paparazzi barrage of long lenses

I’ve definitely appeared on dozens of aviation photo sites, and it never really bothered me.
In fact we really do need all the positive attention and exposure for GA that we can get.

However, I wasn’t impressed to find pictures of me dealing with the aircraft, around between hangars at a visited airfield, where it can clearly be seen I am not aware of the ‘Stalking’ occuring.
Taxing past the tower/apron is one thing but that did P155 me off.

I was hoping to see some pictures of the Shoreham fly-in (due to the number of spotters), but the only one I managed to see was the one Peter posted here. Nothing relevant under the reg (G-APVZ) google.

But I did come across some few weirdos who don’t even talk (the cold-war spy? or the one who opened our glider trailer to take picture of the tail?) and only one a55hole (refused to share a picture of my face on final in a SuperCub at Popham Flyin, he told me us has his copyrights :) ) 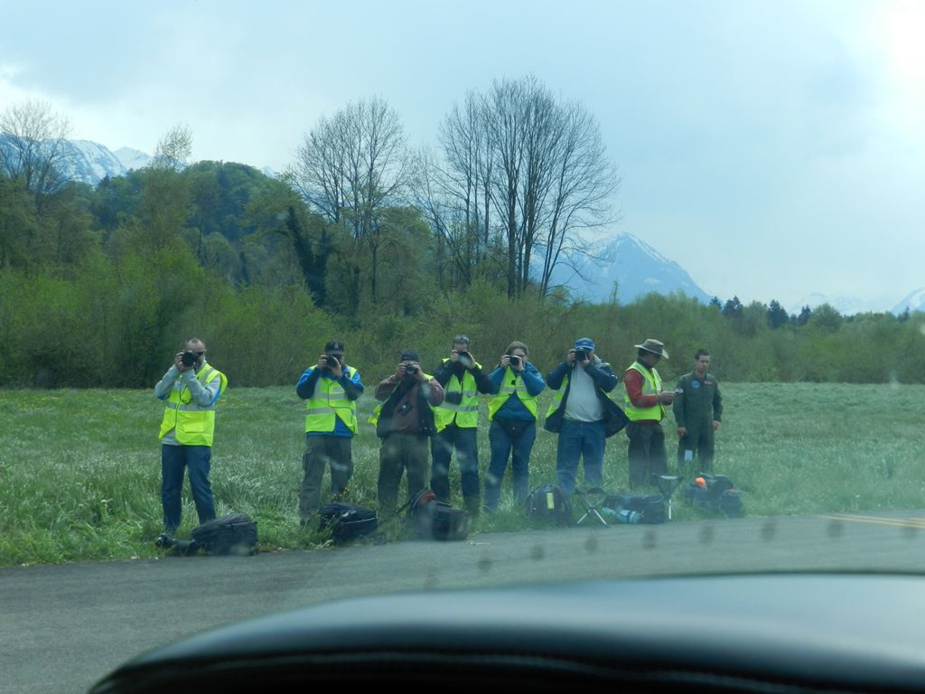 I can provide the first entry :)

That photo must be fake. I see a woman there!

I reckon they have private websites, as well as the ones we know about. I once found one for Guernsey airport, which was most diligently updated.


and only one a55hole (refused to share a picture of my face on final in a SuperCub at Popham Flyin, he told me us has his copyrights :) )

Isn’t such a refusal forbidden? I could also refuse him to use or publish my face, short story.
Last Edited by Frans at 31 Oct 12:58


Isn’t such a refusal forbidden? I could also refuse him to use or publish my face, short story

I don’t think one can play privacy card (public place & no name mention) and no one has the will to go that route? (https://en.wikipedia.org/wiki/Streisand_effect), I did took a close picture of the guy face nonetheless but latter I just delete it from my phone…

If he makes money out of it, I am in for my share

After flying a few years in France and USA I was quite surprised when I first encountered plane spotters in the UK. A quick google image search then made me feel self-important

. Some are antisocial, but I remember having a long conversation with one who was incredibly knowledgeable about Wassmer (of which there’s no books and very little on the internet).

Someone I know found an internet photo of their plane shortly before it crashed so asked the photographer if they had more photos to aid the investigation and got “it’s my copyright, you’ll have to buy them.” Generally one can take photos of private property and persons as long as it’s from a public area, i.e. no trespassing.

It’s a liberty taking photos of strangers – if someone started taking photos of my house/car/family I would be pretty angry. Why are planes different? You should have followed him home Ibra

Restricting access to plane spotters, having arguments etc doesn’t send the right image though. I believe it was plane spotters who discovered the CIA’s extraordinary rendition flights, so they’re healthy for democracy

Penguin do a reprint of the 1940s Aircraft Recognition by R.A. Saville-Sneath which is worth a read.

The laws on photography are complicated and vary around Europe. Google is your friend as usual… In general you cannot stop someone doing it, provided they are in a public place and you are aware they are doing it. They retain copyright in the photo.

I don’t like long lenses quite deliberately pointed at my face, any more than anybody else, especially from 10m away. This happens a lot and that’s why I think the stuff ends up on some private websites. Nobody would bother collecting face photos for themselves.

A lot of close-up pics end up on open websites, indexed by google, so if you fly with somebody who you should not be seen with, be careful

Peter
Administrator
Shoreham EGKA, United Kingdom
22 Posts
This thread is locked. This means you can't add a response.
Sign in to add your message