These are not possible in some countries. In the UK there are loads going around from roughly 1930 and before, and after that there are occassional standard-series ones which can be funny. The prices at which they change hands vary; generally the shorter they are the more money they go for.

I have 772 in mine… coincidence, and corresponded to equipment flown at the time.

Here you can buy any text you want for 599 EUR for 10 years: https://persk.transportstyrelsen.se/extweb/

Both I FLY and FLY I are free.

In Germany, the first letter(s) of license plates depend on your county/city of residence. If you live in Flensburg (FL), the example by Peter would be easily reproduceable.

I used to have “556” at the end of my registration, in reference to my other hobby, shooting (5.56 mm is a standard NATO cartridge)

But surely 1FLY etc must have been already taken in Sweden. Vanity is a universal virtue

One thing they disallow in the UK is alteration of the character spacing, so e.g. C4VOK is supposed to be shown as C4 VOK (the standard format for the “normal series”) but nobody enforces it, so if say you had PEN 1S (again from an older “normal series”) you weren’t supposed to arrange it as PEN1S, but you could do so. Of course that one would have never been issued

All the C*VOK have been taken, though mostly only recently.

Registrations like OVC002 are all very old (maybe 90+ years; somebody will know) and expensive.

I believe in the US you can make them up as you like.

For a real “in joke” (a joke which very few would appreciate) at one point I looked around for BC109 or better still OC72 but never found them, and they would today be very expensive.

The other day I took this photo which is utterly incredible (but not aviation related), showing a plate worth at least 500k on a really cheap car, which being a standard series would have been issued to somebody for nothing, around 1977-78 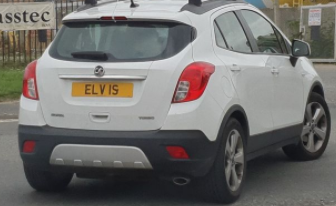 and as the final bit of folklore, in the late 1970s I used to know a gypsy car dealer (actually his speciality was making cars disappear, allowing the owner to claim on the insurance; my friend’s remuneration was in the form of new tyres and a radio which he wanted you to install just before parking the car down the road from his house) who for years had an old car with the plate M4 and he didn’t realise it was worth anything until years later

It was always worth more than his house. It’s a bit like the story an old friend has been telling me, regularly, since 1982, when he met a beautiful girl at a party, she asked him to take her home, and when he drops her off she says “would you like to come in for a coffee” and he said “no, I am too tired”.


But surely 1FLY etc must have been already taken in Sweden.

For a real “in joke” (a joke which very few would appreciate) at one point I looked around for BC109 or better still OC72 but never found them, and they would today be very expensive.

Reminds me of my younger days…


Both I FLY and FLY I are free.
I should get a very rare UK one and just drive around the UK getting people mad

You will get noise & low flying complaints (got one while flying motorgllider, luckily my reg was neutral than T-GUN


I believe in the US you can make them up as you like.

The procedure varies from state to state but typically if nobody has the number in your state, you pay a small fee and get the number you like, as long as its within the limit on number of characters and not obviously offensive.

Silvaire
USA
31 Posts
This thread is locked. This means you can't add a response.
Sign in to add your message