At work we use a Cinterion (formerly Siemens) MC55i GPRS modem for GSM connectivity. It has TCP/IP built in and you talk to it entirely using special AT commands

The module I was looking at does something similar but it's from Telit. IIRC you talk to it using either SPI or UART (and use AT commands to do everything). I've also seen WiFi modules that work in a similar fashion - they give you an AT-like command syntax and support basic HTTP/HTTPS/FTP/etc.

For wired ethernet I've used the W5100 IC from Wiznet (which is nice for a microprocessor system since it can be used as memory, but it also supports SPI). The W5100 gives you TCP/IP but you've got to write (or get from somewhere else) your own DNS/DHCP/insert higher level protocol here (it also lets you get a raw MAC socket if you need to do anything at the ethernet level).

The stuff for RC helicopters I've found quite reliable but I've not been building things with the bare sensors, I've only bought ready built modules - things like the Microbeast flybarless gyro have been flawless (despite being on the heli during one or two disastrously high speed crashes).

alioth
Andreas IOM
what next
12

How are you programming the Atmel processor? C or assembler?

In C and C++. I use the Arduino programming environment, because it is available on my Macintosh and the internet is full of code libraries, so I do not have to re-invent every wheel myself.

We will be moving to the ATmega128 when we get around to it... the prehistoric Hitachi H8s we use are being discontinued.

I take it those GPS receivers and accelerometers are from the model aeroplane world? My son plays with that all the time (and FPV).

They are generic OEM products (the GPS receivers are advertised for use in smartphones and road navigation as well!). I came across them because I am about to make one of these multicopter-drones with my son (14yo). Of course we could buy one for 1000+Euros, but that would take 90% of the fun away.

However one thing which struck me about those electronics (on which he has spent thousands) is how unreliable they are. Almost all of it packs up within months. That could be his tinkering, however, and a lack of antistatic precautions. One just cannot throw bare PCBs around...

I don't know, really. My first remote control that I built around 1976 (my father, a nuclear physicist, wouldn't allow me do buy finished products, just like I do now with my own son :-) ) still works today. Either the parts were better (or simpler? it was mostly TTL and early CMOS circuitry) then or we took better care of it.

One could even implement FTP and HTTP servers, grab data from an FTP server, etc.

For that, there is the "Raspberry Pi" now. An amazing little do-everything device that costs less than 50 Euros. Unfortunately, I have not yet found the time to play with one...

Here are two more of my recent ATmega projects, a replacement stopwatch for the FNPT of our flying school (the original Davtron clock would have cost in excess of 200 Euros, my homebrew one around 10...) and a replacement marker "receiver" also for the FNPT. Of course I wouldn't dare to install one of those in a real aeroplane ... because I would never get it through security, looking like a James-Bond-Movie atomic bomb detonator as it does :-)

The stopwatch (which fits a standard 58mm panel cutout) looks a bit ugly here because the protective plastic is still on the plexiglass: 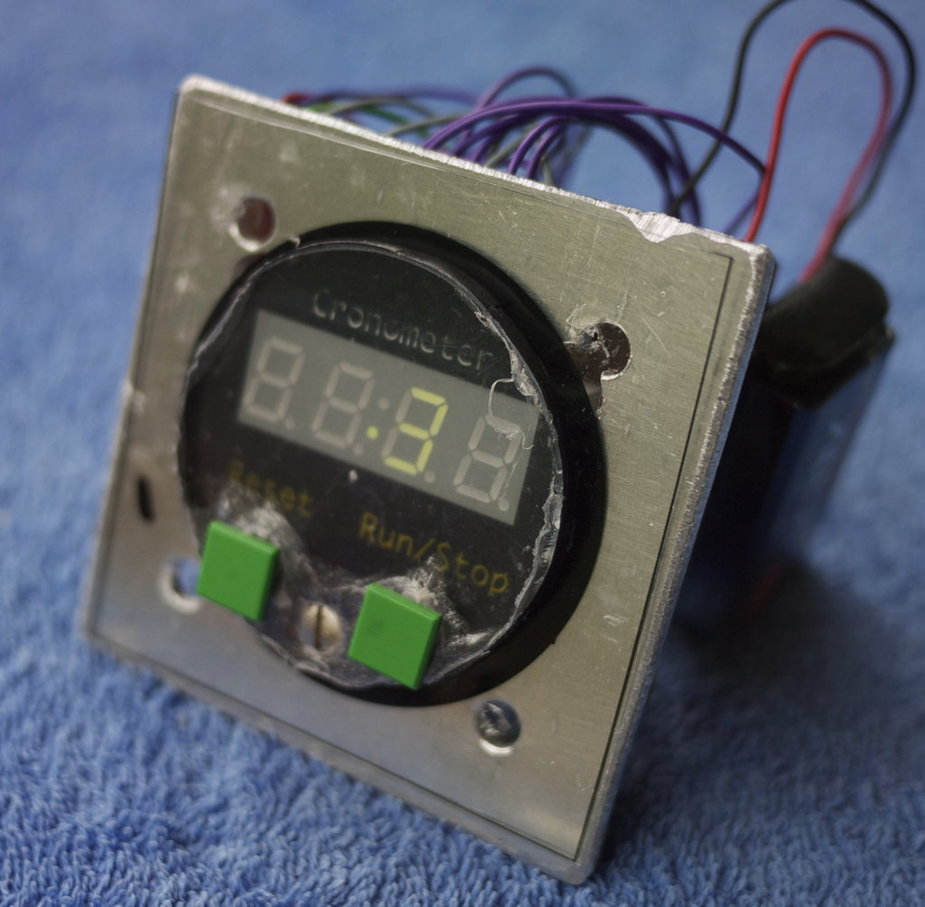 Here one can clearly see that it is a prototype: 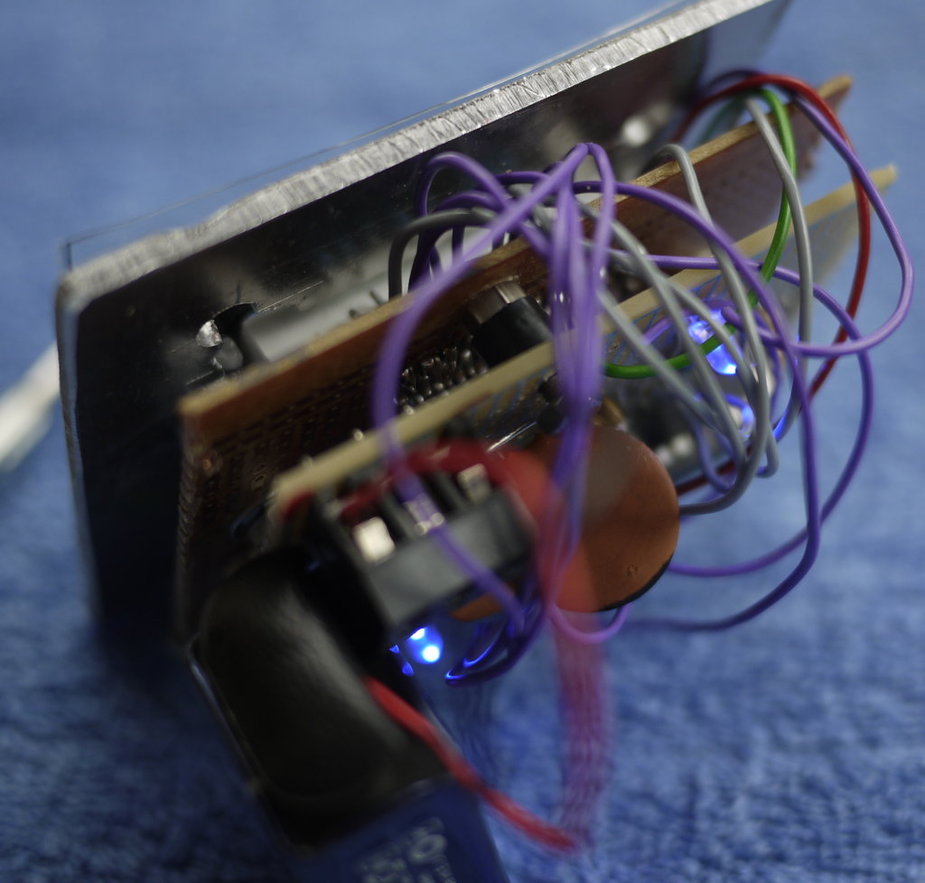 And this is the marker receiver: 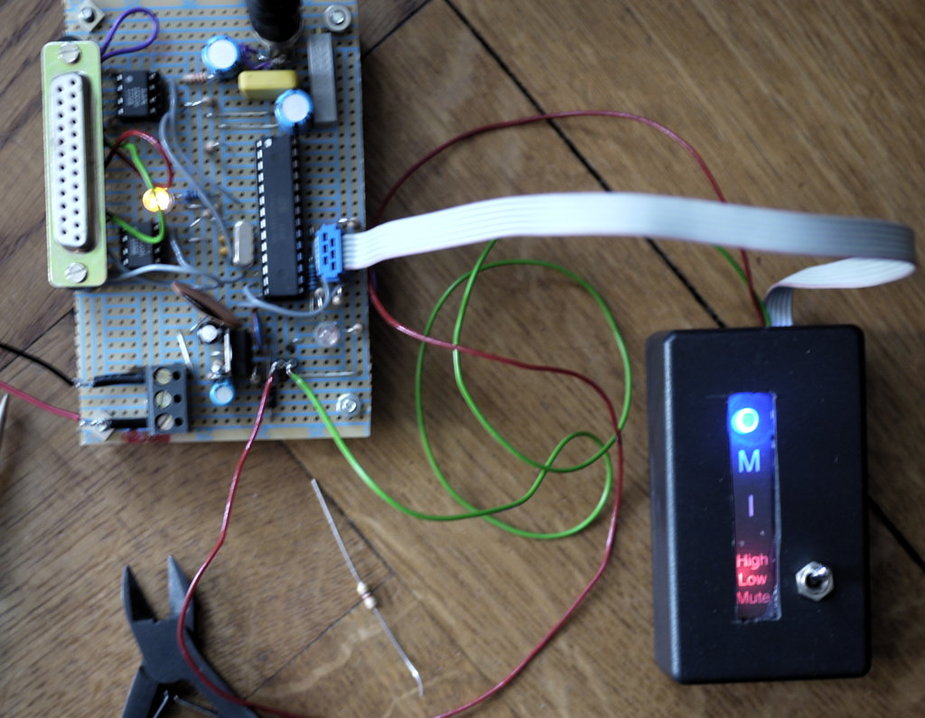 what next
EDDS - Stuttgart
what next
13

BTW: My homegrown "QNH indicator" without calibration of any kind (!) shows exactly the QNH of EDDS airport which is about 13NM away. I just rechecked with the latest METAR.

what next
EDDS - Stuttgart
Peter
14

I'd like a replacement for a Davtron 303 but which reads the temperature with 0.1C increments.

That would make a nice project.

I'd like a replacement for a Davtron 303 but which reads the temperature with 0.1C increments. That would make a nice project. The probe is a AD590-like sensor (1uA=1K).

That's probably just not possible with an off the shelf ATmega microcontroller. The analog inputs only have a resolution of 10 bits. Over the -50 ... +150 deg.C range this will only give 0.2C increments. But with an external A/D converter it should be possible. For the rest it would be straightforward. I even know a guy who can make the laser engraved faceplate (so nobody will ask silly questions) which will be the most expensive part.

what next
EDDS - Stuttgart
Peter
16

At work I use an ADS7828 which is 12 bits. It is I2C, which I had to bit-bang in H8 assembler. The converter takes about 20us and then it took me 630us to clock the commands in and the data out. The Atmels have high speed I2C, mostly.

Is the 10-bit ADC in the uC any good? I have always found that the last 2 bits in those are fiction, but can be useful if you average say 100 readings (get a x10 noise reduction i.e. 3 bits). With a lot of care and ground planes everywhere, I have managed to almost get 12 real bits out of the 7828, with the H8 next to it... We still average many readings taken over 20ms or 16.6ms (for mains noise reduction).

I was going to tackle this when I have finished frying some bigger fish...

Well, this is what they claim to achieve in their datasheet (ATmega328):

• Up to 15 kSPS at Maximum Resolution

You can apply a separate (precisely controlled) reference voltage to the AD converters other than the normal supply voltage to get the maximum precision.

But I haven't tried it yet myself.

Or SPI. There are plenty of external AD converters (e.g. the ADS1252 from Texas Instruments with 24bit resolution: http://www.ti.com/lit/ds/symlink/ads1252.pdf, 10US$ on eBay...) that can be connected via SPI with only two wires. Should be sufficient for your temperature reading :-)

Two problems remain: How to make the temperature probe weatherproof and what "daylight readable" display to use.

what next
EDDS - Stuttgart
Peter
18

I doubt if any constants in the universe are known to 24 bits... mass of the electron? Some 24-bit ADCs can be very linear though. Making a bit of real equipment which actually makes use of more than about 20 bits is almost impossible.

The temp probe would be the existing probe. The display would probably be LED, dot matrix.

I doubt if any constants in the universe are known to 24 bits...

The constants maybe not. But you still can measure your variables with that kind of precision. In the datasheet they write:

I'm not familiar with any of those, so I don't know if they really require that amount of precision.

The temp probe would be the existing probe. The display would probably be LED, dot matrix.

That should make your project fairly easy then. A rainy-Sunday-afternoon exercise. One button to query (C/F/Voltage), serially attached sensor and some kind of "half intelligent" display like this:
(Siemens RED PD4436)

what next
EDDS - Stuttgart
Peter
20

You would also need to add an EEPROM e.g. 93c46 so the unit powers up in the last selected mode. The Davtrons always reset to the top option, which is annoying.

The Davtron 655 would be more interesting to do and it gets closer to Achim's original requirement. It needs the pressure altitude and gets it via 10-wire Gray code. It would be much better to get it via ARINC429 digital, which comes out of a GTX330 or similar.

It still can't do the QNH; for that one needs GPS data.

Peter
Administrator
Shoreham EGKA, United Kingdom
27 Posts
This thread is locked. This means you can't add a response.
Sign in to add your message

Is this the lowest and highest pressure ever in/near Europe?
Flightradar 24 / FR24 - how exactly does it work?
How does ATC radar derive altitude from transponder altitude?
Random avionics internals