Fuel shortages in the UK?

I’ve known lots of people who just put £20 quid or so in, every so often. They tend to be people who don’t do huge amounts of driving (or known amounts of regular commuting) and in small vehicles which don’t need filling that often anyway. Then it becomes a weekly thing for them. I guess like going to the baker daily vs a big shop once a month.

I’ve always liked to keep my vehicles near full, just incase I have to do a long drive with short notice. Around me I’ve seen a few garages shut and plenty open. I’ve got enough to keep going for a few weeks so will wait for lots of this to blow over. I’m guessing there are going to be lots of people who suddenly won’t need to be going to the filling station for a while.

I think one element of the HGV driver issue is that there have been lots of messages about how autonomous driving is just around the corner and going to destroy all the jobs.


how autonomous driving is just around the corner and going to destroy all the jobs.

For values of “just around the corner” of 30+ years.

We don’t even have autonomous main line trains, and they are already steered remotely and don’t even have 1% of the issues that an autonomous lorry would face. The automation for trains we do have still has to be supervised by a driver in the cab.


If we are 100,000 HGV drivers short of what we need, one might expect to see companies offering fully paid-for training plus attractive starting salaries to unqualified applicants. But we’re not seeing that – we’re seeing companies offering a little bit more money to already-qualified drivers.

This is a problem in many industries; paying for training only for staff to leave the day after they get their qualification is hard to take, and small companies could not afford to do this.

I suspect the qualifications to handle petrol are rather more than just the HGV driving licence though, surely oil companies should pay for that; maybe they do already.

You need to know the real inside story on this, which is not in the media.

BP tried to screw its drivers (and it is a very large number) into accepting a £30k contract. BP wanted a post-brexit continuation of East European driver availability i.e. visas. For comparison, the normal fuel delivery driver e.g. TEXACO is on a £60k contract. One of the driver associations leaked the story to the press to make this hard for BP to pull off.

Most of the stuff in the mass media about widespread driver shortages is bunk.

I know, (but don’t see often) an ex BP tanker Instructor and driver.
He was being badly treated in the way mentioned above.
The cheap labour from europe was causing pressure on the std uk wage.
Drivers were facing a tougher and tougher job as years passed by, with tighter margins, tighter health and safety constraints. Longer standard hours and poorer contracts. All as the uk road infrastructure is in turmoil and journey times are increasing (mainly in the south but all over the UK.)
For the same level of employment some of the eastern european drivers felt like they had won the lottery. But unless a UK driver was to relocate his family to a cheaper cost of living country, what is he supposed to do?
He took early retirement, and now drives coaches part time.

According to the news here it’s due to low number of skilled workers in the UK and poor working conditions. At the same time they mention the Christmas turkey. The same problem there. No turkey this Christmas it seems.

Except that the RAF doesn’t have any “real fighter jets”: 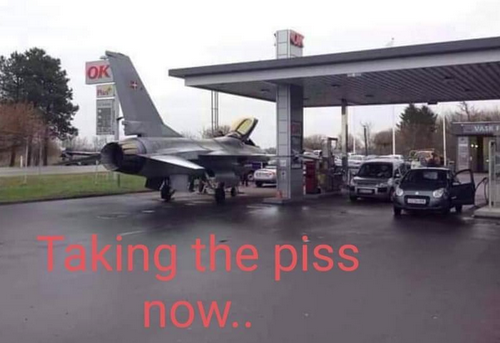 According to the news here it’s due to low number of skilled workers in the UK and poor working conditions.

Yes; the UK is just a sh1tty place to live and work, and after brexit it will go down the chutes (there is another definition on urbandictionary but not really suitable for the more emotionally vulnerable EuroGA readers) completely, and then beg Brussels to let them back in, while selling operating leases on all its airports to Fraport

At the same time they mention the Christmas turkey. The same problem there. No turkey this Christmas it seems.

Hence the phrase “turkeys will never vote for xmas”


the UK is just a sh1tty place to live and work

That wasn’t what I meant. We have had the same problem here in agriculture and fishing “refineries”. But that was due to Corona and closed borders. Skilled seasonal workers from former east block countries usually come and do these jobs. Lots of stories about people trying with Norwegian youths, but they gave up most of it. Not that it is particularly poorly paid, it was more that the youths didn’t show up in time, worked too slow and so on

In essence it’s a result of good times too long. Now Corona is gone, but Brexit is not. We are already back to normal (with tons of east Europeans keeping the country going

), but for the UK the “new normal” is permanent. Which is what the UK elected for in the first place.

Much of the mainland does wish for the UK to go down the chute, because brexit has rocked the boat (I see the mainland media too) but it won’t.

Relying on former communist block people to deliver cheap labour is “nice while it lasts” but those countries won’t be “poor” for ever. And then all of Europe is going to go down the chutes. A longer term solution has to be found, and it has to be in the form of improving the working environment here. Plus a change of culture so the people here are willing to do the more simple work.

It is exactly the same with cheap chinese stuff. This has powered the consumer tech revolution. Nearly everything on amazon, ebay, in the shops, is chinese ripoff, fake, counterfeit, or just a plain copy of stuff mostly designed in the West. And now look at what China is doing in the military / electronic/data warfare sphere. In business they are ultra aggressive too; just today I have seen a 3x price rise and I am asking them to return the USD 3k tool. Will they? Of course not; they will steal it, or break it and say it is damaged. Again, a longer term solution must be found.

Back to the topic, the tanker driver thing has a “former communist block component” as I posted, and a longer term solution will have to be found. And it will be found.

Just heard the average spend at a petrol station is £25 which shows how close to empty most people are driving. Hence the panic…

Cheap slave labour is all well and good until it’s not available. Having a rounded workforce in your own country seems eminently sensible.

I don’t know how many Eastern European ADR drivers there were, but I don’t think it’ll be a huge proportion. Especially as we’ve had no fuel transport issues up to this panic purchase point.

I did hear from a police officer in the south east area that lots of the lorry incidents they had to go out to involved intoxicated eastern europeans.

Off_Field
179 Posts
This thread is locked. This means you can't add a response.
Sign in to add your message