That’s astonishing data in there…

That’s the tip of the iceberg Peter.

The sighting by Kate Tee has to be one of the more concrete leads they have. It must be more than co-incidental that she spots a large jet and notes it is flying at an unusually low altitude in what can be described as near the middle of nowhere.

All would seem to point to a deliberate act, by whom being the ultimate question. If the search was resumed, and they happen to find the wreckage, that question may never be answered. Not sure where my thoughts would be had I lost someone close on the flight. 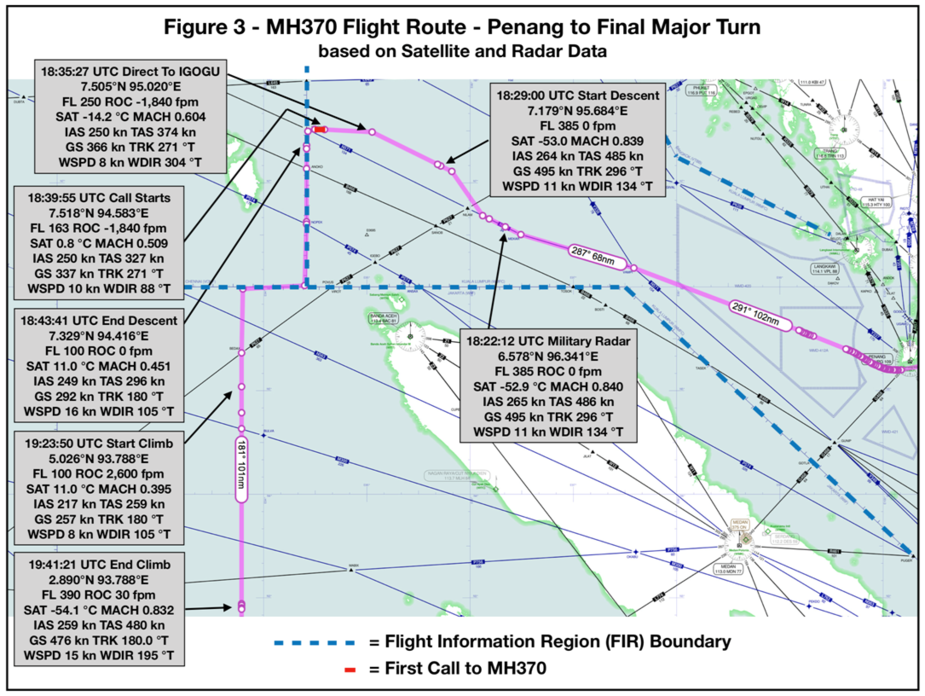 The data deduced on the above image looks like:

Just about time for a first toilet visit.
Lock other pilot out / Kill pilots.
Turn off route.
Depressurize.
Wait for oxygen to deplete.
Climb to make sure everybody dies.
Descend to get beneath radar.
Turn south „secretly“

It’s incomprehensible to me how all these ATC and military radar units failed so embarrassingly that night.


The data deduced on the above image looks like:

Yes it would fit a scenario that you describe,. The other fact shining brightly is that this was not some newly trained, Florida, FAA PPL, with 50 hours total time. Whoever was flying this thing knew exactly what they were about, unfortunately…..

Was there any valuable cargo?

There is no cargo I can imagine which would make this job worth doing, especially relative to the size of the scandal resulting from a leak.

Also there are extremely few pilots who would be smart enough to do it (becoming a multi thousand hour ATP on the way) and be willing to die for it. And you would need to line one up just in time, knowing the cargo will be carried on that plane. This cannot be the reason.

What’s the backstory on the pilot?
Any ‘honor’ in it for his/her family?

Thanks for the links, this is fascinating indeed.

@peter
I didn’t mean the pilots necessarily had anything to do with it. Hijacking an airliner and landing it somewhere to steal something is far fetched, yes, but you never know.

If one of the pilots wanted to commit suicide, why all the effort to get outside radar coverage? From experience, before MH370, modern heavy jet transport pilots would have never considered it possible that the location of such an airplane is at any point unknown. I certainly didn’t.

A mire likely explanation is some catastrophic technical malfunction (for instance a flight deck oxygen supply fire, like egyptair 777) that killed the pilots shortly after their initial actions (turn around). The plane depressurized, the pax oxygen masks dropped automatically, once that oxygen was used they all died. The plane kept flying and when the engines flamed out it oscillated and broke up into larger chunks which then quickly sunk upon hitting the water.

This site has brought up weird theories before. In one release a while ago, they mused about it having targeted the Christmas Islands and having been in a holding there.

Several things don’t compute and therefore I am very sceptical of all the stuff they post beyond the point where radar contact was lost for good. Particularly the descent to FL100 and climb back to 390 as well as some other aspects of this trajectory do not compute with any known calculations by the satellite company or those in charge of the investigation. And the only real proof we do have that the echo turning back over land is that the copilots cellphone made a contact with a land station at the time when the radar echo shows they were over land.

There is also the part with the alleged sighting by a woman in a sailboat which I simply think would have been known years ago had it happened. Don’t forget, there were also people in the Maldives who claimed to have seen the airplane, which was wrong.

It is however likely that the plane came down in the area the site claims, there are other calculations which come up with the same area, some including backtracking of the debris found in Africa, Satellite footage which showed some material at the spot some days later and some calculating a very different trajectory. So it would be highly desirable if a new search was started in that area. In any case, the FDR, if ever recovered, could help indicate what has happened on board, unless it also had been disabled like the Transponder. CVR, even if recovered, would have at least overwritten the part where the plane diverted, but might have caught it if someone was indeed alive in that flight deck during the last 2 hours before it crashed.

IMHO it is a must that this loss needs to be solved. This implies however that the search should continue.

Mooney_Driver
LSZH, Switzerland
150 Posts
This thread is locked. This means you can't add a response.
Sign in to add your message

How far could a 777 fly at 1000ft AMSL?
How can a plane be crashed vertically without breaking up beforehand due to aerodynamic forces?
Europe 24
GermanWings - would an FAA Medical have prevented it, etc