And regarding hangar fires: They come from where you least expect it… Our hangar is heated and has a maintenance facility, so no need for aircraft heaters, but a chance of the mechanics getting something wrong. Nonetheless our only hangar fire so far was caused by the paramedic of the rescue helicopters that used to be based there (their operation was moved to another hanger not long after that accident). During his daily systems check in the morning, he opened one of the oxygen bottles which ignited some flammable stuff in the vicinity. Luckily the ground crew was very quick at pulling the platform, on which the helicopter was parked, out of the hangar. In one of the pictures “my” aircraft can be seen which was parked right next to it. Oxygen bottles are much more dangerous than engine heaters or soldering irons, obviously!

what next
EDDS - Stuttgart
RobertL18C
18

Those aircraft which subscribe to the ArmStrong starter brand, become recalcicrant at around -5C.

I can think of alternative uses for that 2.8kW device, for certain types of pets

I have one – not in that colour scheme. It dries the Newfoundland but no way it would warm your engine to be worth the trouble.

This is how we heat our engine. We have 2 × 3kW electric heaters: 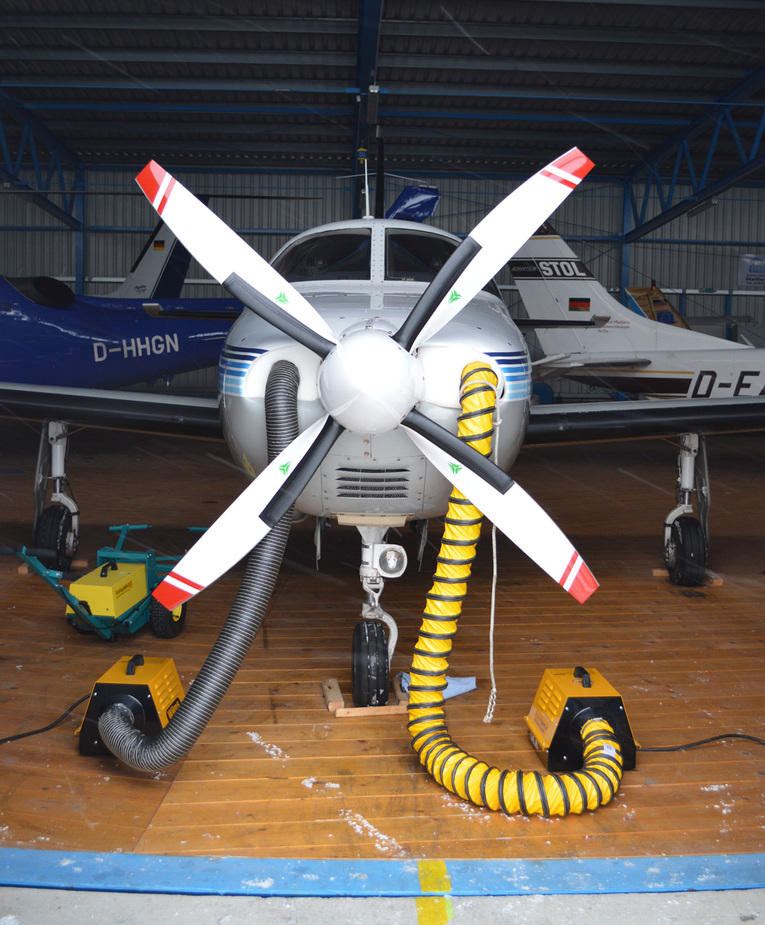 We had a long discussion on this in a German forum. The bottom line was that any unattended heating is a major insurance problem and for example the local hangar owner would not officially allow it. The only exception might be one of those STC solutions which are then regarded as part of the plane and covered by the plane insurance. And applying common sense I think unattended electric air blowers are just too much risk. Who knows if some plane in the hangar is not spilling fuel on the floor and then the remote controller heater might do the rest…

So my approach is as much heating power as possible using standard equipment which does not look like a DIY explosive device. This way in 20-30 minutes the plane is ready to go. We share the system with others in the same hangar and reduce the costs.

Sebastian, where did you source the heaters from?

From an engine point of view, my Thielert (sorry, Continental) Diesels probably can be started at ‘any’ temp. However, the fuel type dictates some limitations: not colder than -30 degrees C for AVTUR and not colder than -5 degrees for Diesel fuel.

And applying common sense I think unattended electric air blowers are just too much risk. Who knows if some plane in the hangar is not spilling fuel on the floor and then the remote controller heater might do the rest…

) but the above is exactly my view. I have seen enough stuff go up in smoke. Especially any heater which contains a fan. If the fan packs up, the only thing which prevents an instant major fire (3kW in a small volume is an instant fire) is an overtemperature switch, which (you hope) is very close to the heating element(s). Fans in particular range from really crap to “ok but will stop working after x months/years”. For example every PC I have ever built has had a 100% fan failure rate, as has almost every piece of test equipment (including most HP and Tek ones). I now use Sanyo fans in PCs but at 30 quid nobody is going to use them commercially.

That is why oil heaters, which just have an element in the bottom and use convection, are so much safer. But they are very slow.

A heating pad on the bottom of the engine should be extremely safe – especially if it is low voltage, and the power supply for it (say, 24V out) is remotely located. It could even be just outside the hangar.

Peter
Administrator
Shoreham EGKA, United Kingdom
226 Posts
This thread is locked. This means you can't add a response.
Sign in to add your message

Cold starting 0-360 (does manual propeller rotation do anything?)
Bug with "cold" thread
How many people have a GPWS / TAWS?
Winter Flying