The guts to cancel a flight

Last week of July I had to fly Kerkyra LGKR to Straubing EDMS to leave the aircraft and return home in Athens same evening by airline from Munich with a train connection that did not left many hours to spare.

Aircraft is non anti-ice equipped Socata TB20 with a Stormscope, oxygen on board, GNS530 for primary NAV and a Garmin 296 for backup.

The 670nm, 5 hr IFR flight route (NIKRO M127 TRN L604 PABSA L610 STAUB) at FL120 passes over ~6.000 ft. high terrain between LYPG Podgorica & LQBK Banja Luka and later the eastern Alps between LOWG Graz & LOWL Linz before descending to EDMS. If needed I could go up to FL160 or a bit more to avoid weather.
Landing at EDMS I would have ~1.5 hr fuel reserve. Not too much, not dangerously low, but for an area/country I am not familiar with regarding plan B’s the fuel is perceived as less than the actual one, especially after 5 hours flying if you end up in IMC in need to divert.

The appointment for the scheduled work that would last 2 weeks was fixed for a certain day that the shop told me if I cancelled it it would then move much later due to other scheduled works.

I assumed that in July I had slim chances of IMC over terrain which is something I avoid due to the absence of a way out apart from an 180, 90 or whatever to avoid the front and to land elsewhere. Elsewhere ? we have a flight to catch from Munich, yeah right …

As the date was getting closer the pressure built up because we (with copilot) booked a specific flight for return home the same evening that was much cheaper than all the others around same time & date.

So the get-there-itis was already building up as always for the wrong reasons non related to the flight itself.

4~3 days before the flight – with all the logistics set up – when forecasts become reliable, I was stuck on the weather portals not believing I was so unlucky to have a weather front right in the area and the day I did not want it to ! 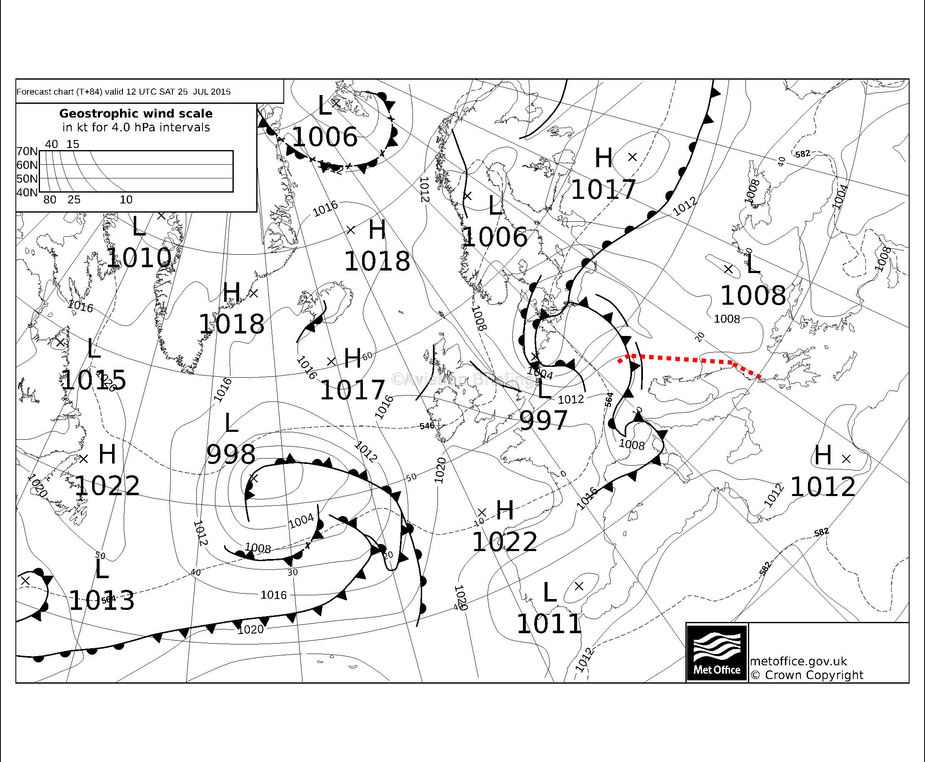 Greek portal based on GFS model: 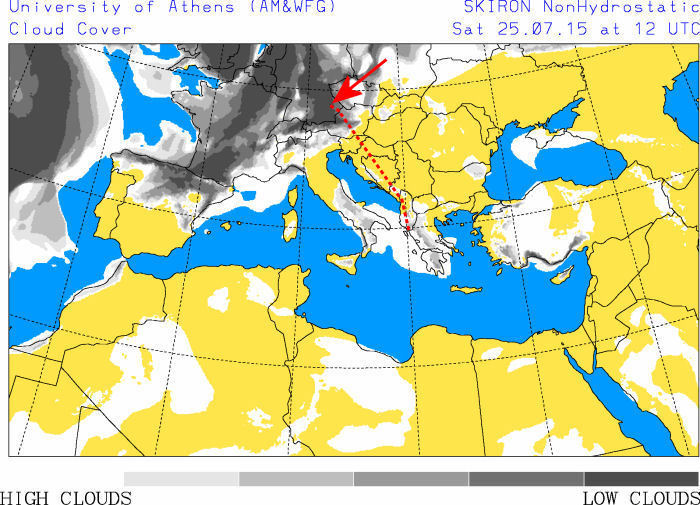 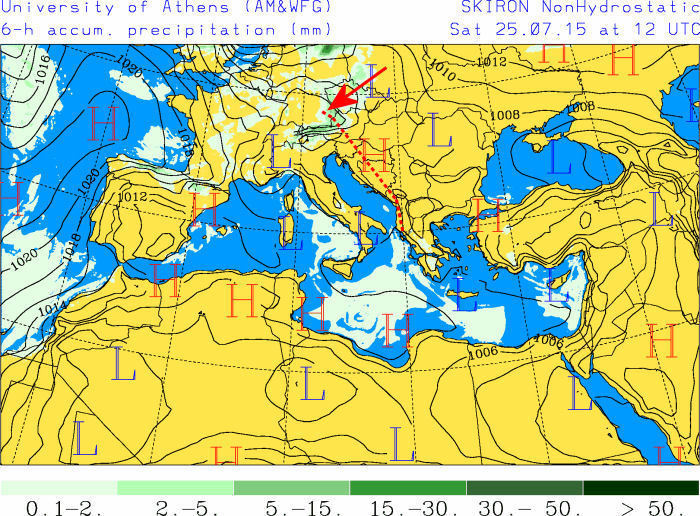 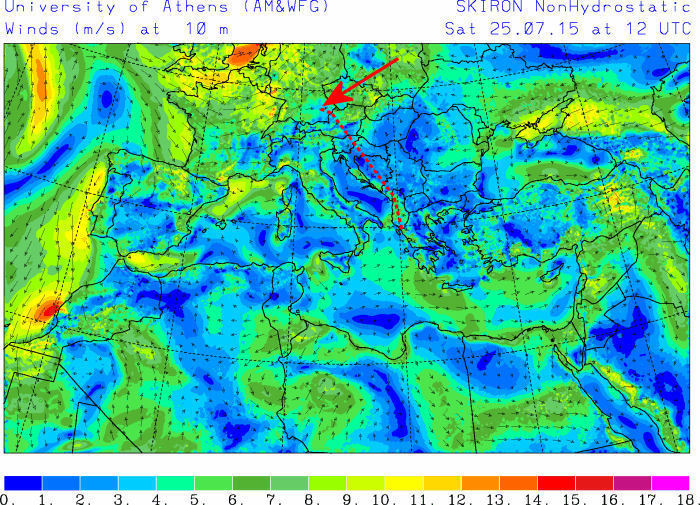 Anxiety was building up with hope of improvement ! until 2 days before when I decided to cancel the whole operation regardless of the nasty rescheduling odds.

As I sat home the day of the (cancelled) flight I could not refrain from monitoring the weather I would have faced.
Weather situation the time I would be crossing the eastern Alps: 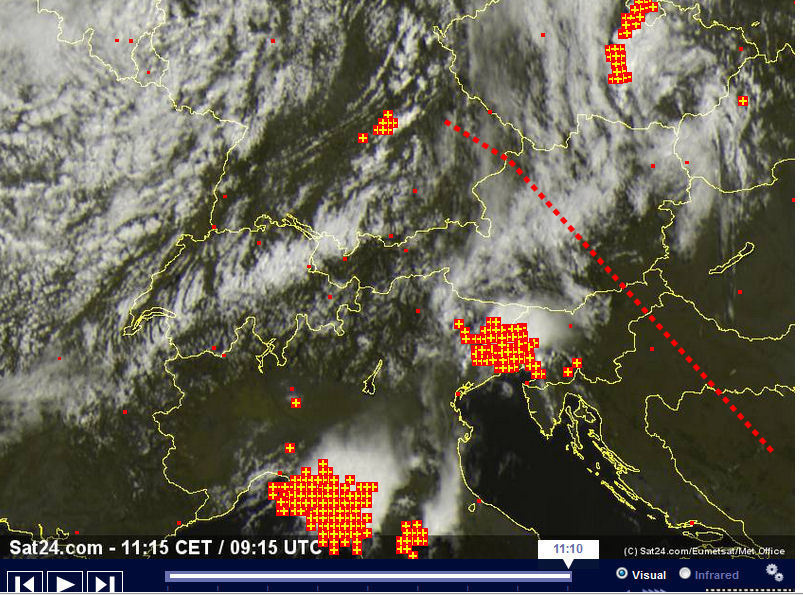 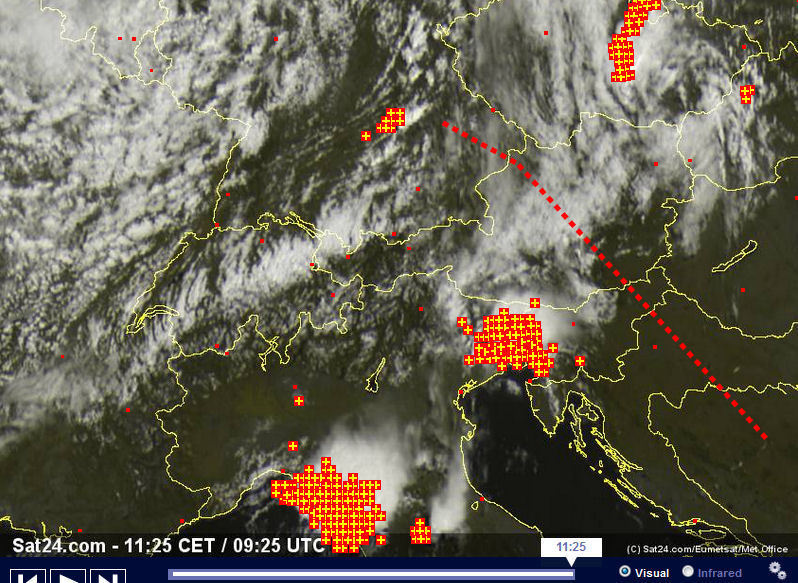 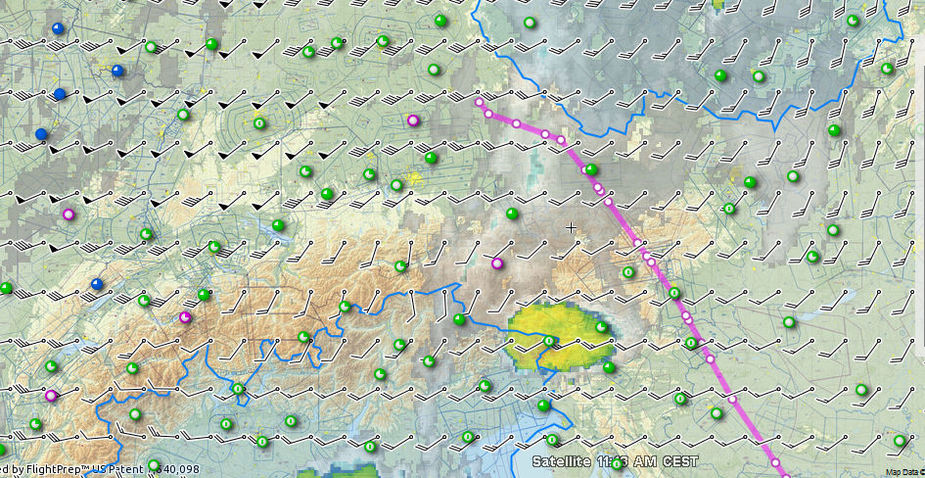 I even copied down the METARs ! and sent them to my copilot for mental support !

As it proved out the flight could have taken place with safety margin and the forecasts where showing worse conditions than the ones actually occurred.

I was pissed ! but felt proud I had the guts to overcome the get-there-itis syndrome that has killed so many GA pilots and passengers in the past in all there articles we read about.

That confession is what drove me to post this thread !

I tapped on my shoulder and went back to usual duties thinking about the rescheduling.

The whole operation was rescheduled for next week, 1st weekend of August but this time we left one day spare by booking the Sunday airline flight which was again cheaper.
For the intended day of ferry flight (Sunday) the weather was again not showing good. So we decided to fly one day earlier on Saturday, just before weather was moving in again, and unable to change the airline flight we simply decided to kill time in Munich all day Sunday.

With the gracious hospitality of Flyer59 who contacted me via this forum it became even better !

The day before the Saturday flight the GRAMET section showed this: 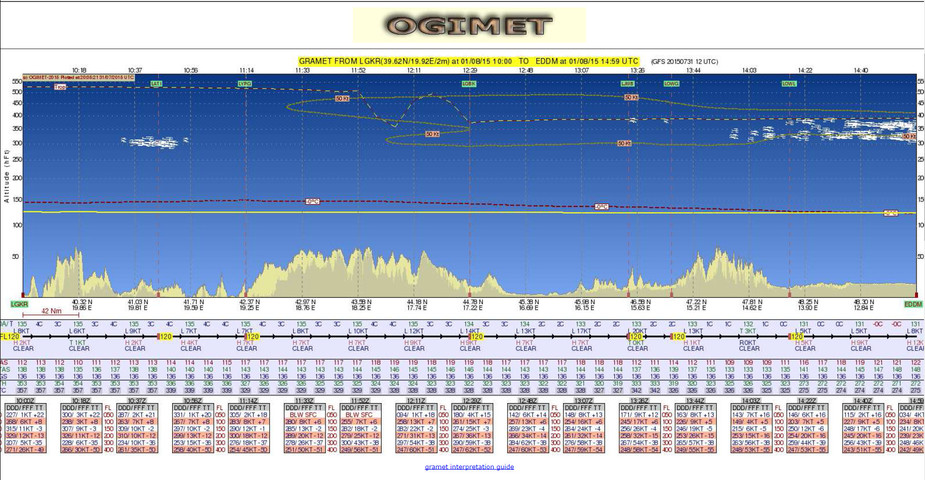 We were good to go.

First landing of the day as we land in Kerkyra LGKR Saturday morning to refuel and disappear a.s.a.p. ! to avoid afternoon weather in Germany.

36*C in sunny Kerkyra as we were sweating from the hot tarmac waiting to refuel, 20*C cloudy and raindrops (see further down)
when we got to Straubing.

Greeting friends in the Cirrus who also flew in for fuel and were waiting some considerable time before us ! 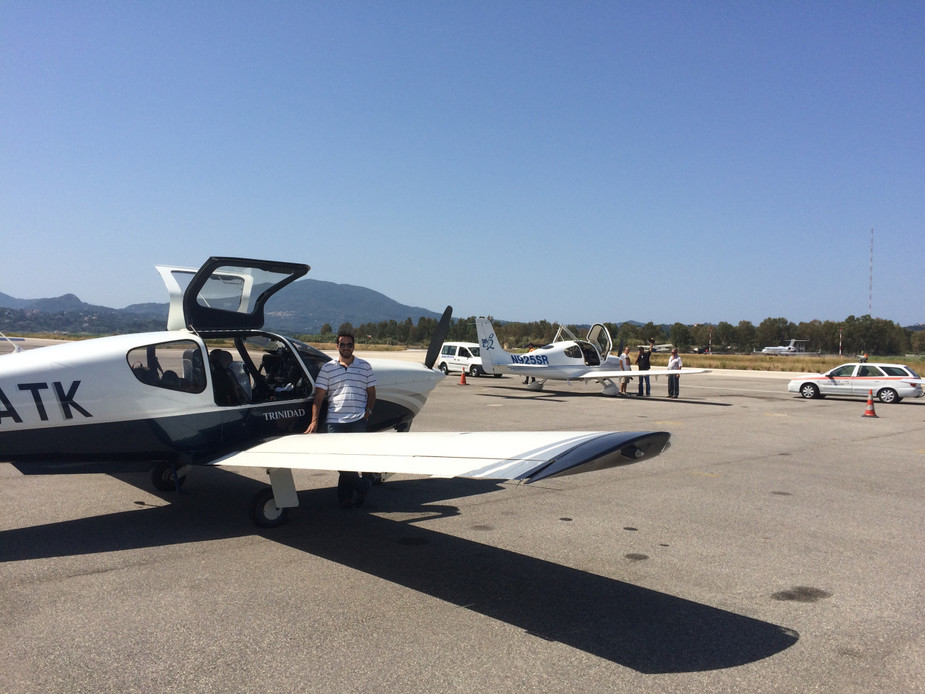 The flight took place, all went well and we just had to go to FL140 to avoid some calm broken layers over Bosnia-Herzegovina. 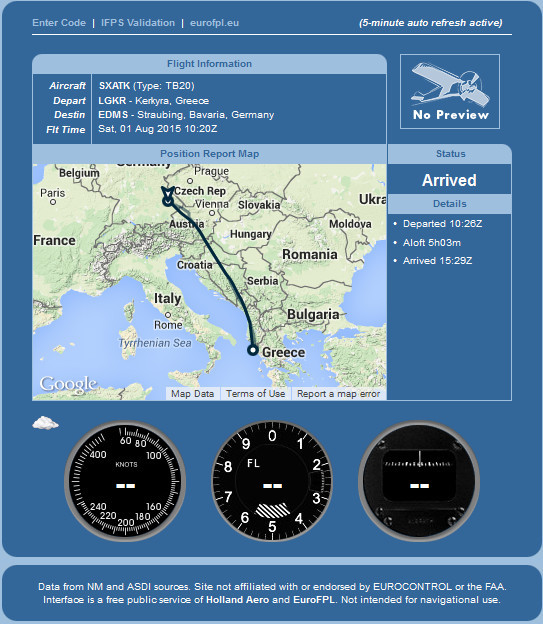 Nice shortcut DCT STAUB towards the end by Austrian ATC 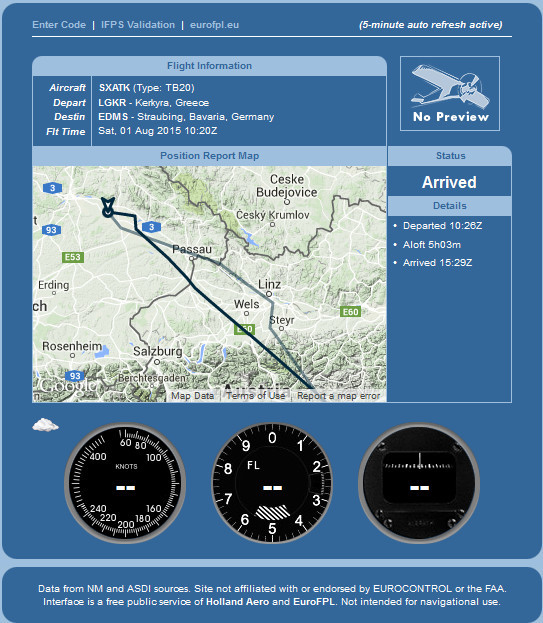 Just after we shut down engine the first drops appeared; perfect timing. During Sunday when we were killing time in Munich we checked actual weather in the intended flight path and this time it was indeed as forecast.
Not a drop of rain in Munich (city) but the Alps section of the route had stuff to avoid. 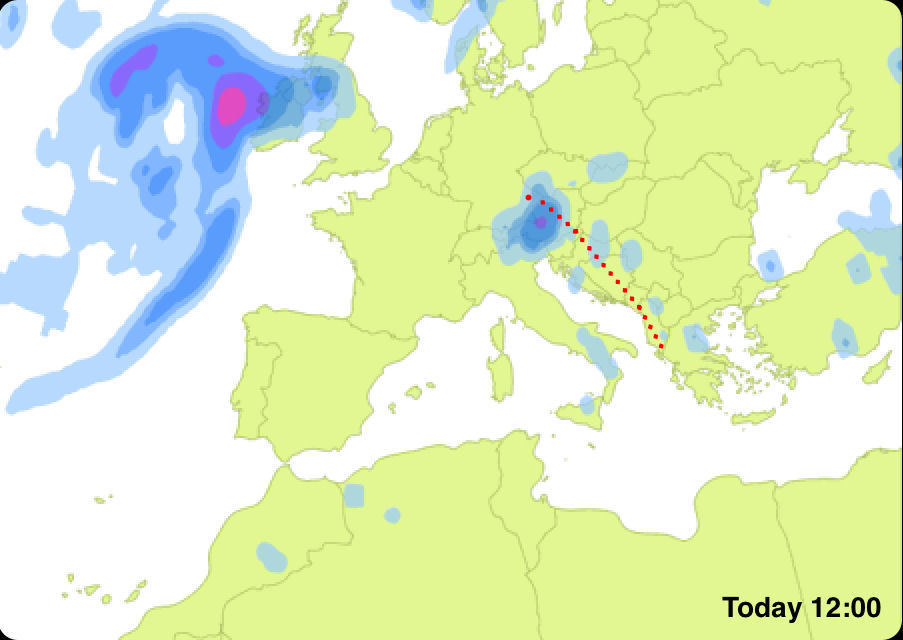 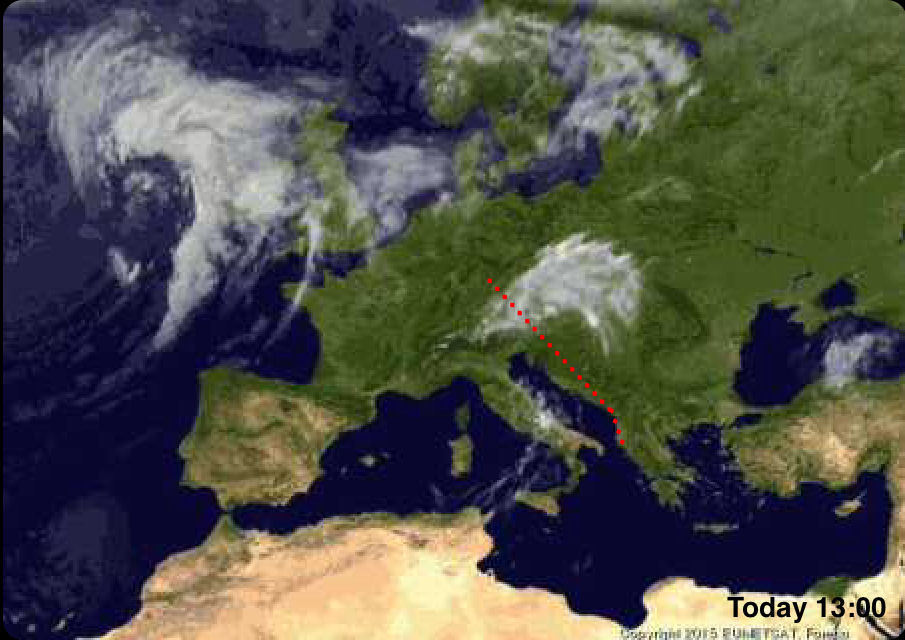 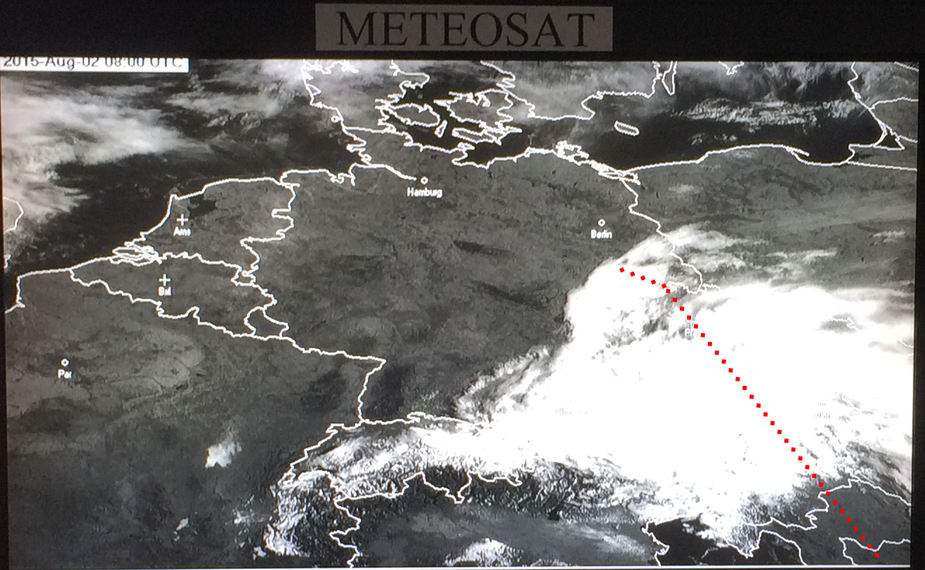 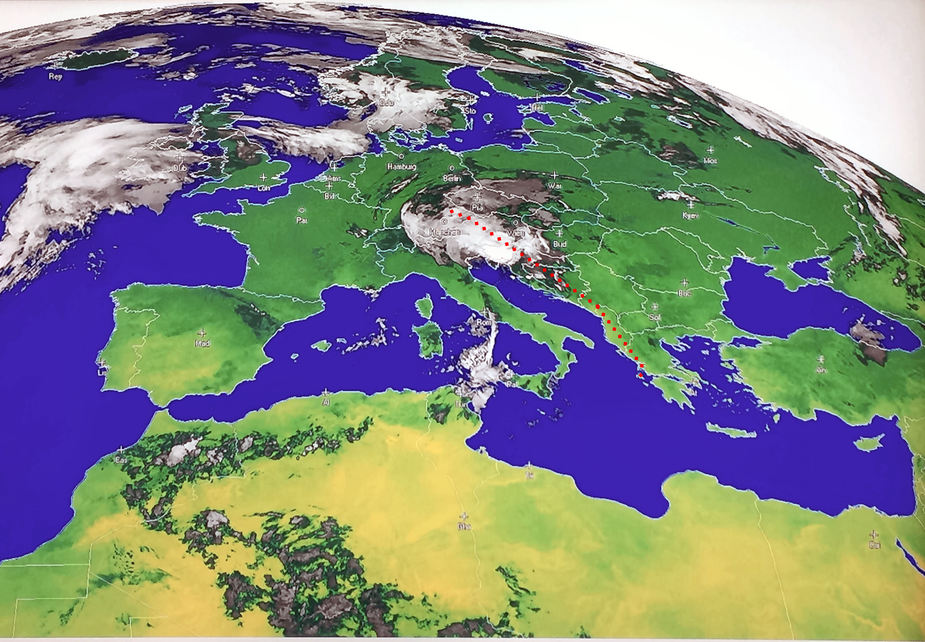 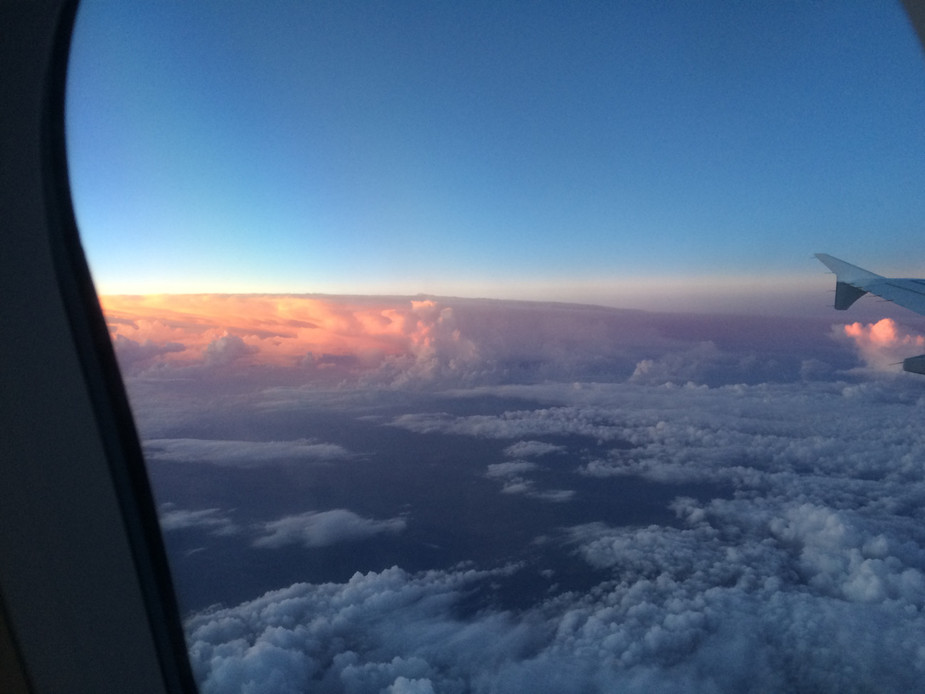 So what if the aircraft takes longer to be delivered, that was the motto of the weekend, we were safe on ground and by chance had a great day in Munich where we walked 20 kilometers to feel the vibe of the city !. 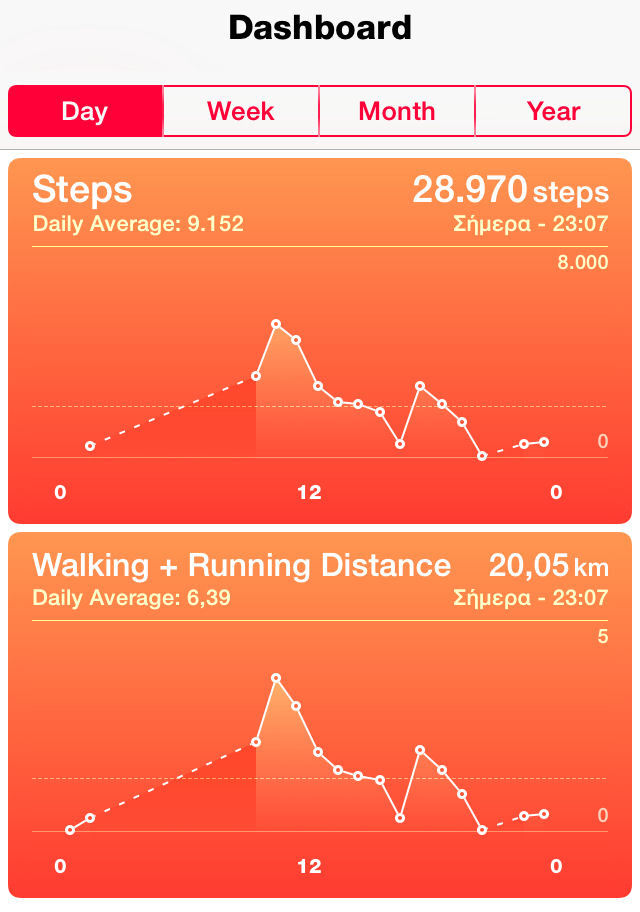 When back at the office on Monday I was peeping at the aircraft through the live webcam thinking of all the tension of the last two weeks that it took us to get it there through three weather fronts. 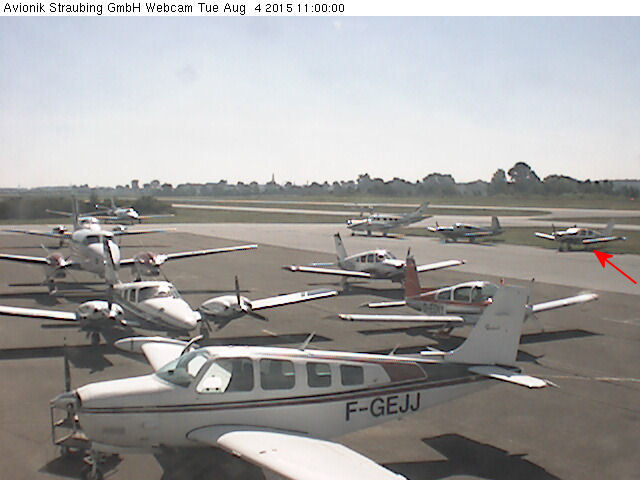 Lesson: never cancel any flight (no matter how bad it looks) two days in advance.

Also, in my opinion, Kerkyra is a disgrace. Regularly having people wait in 35 degrees for hours to get fuel (just because they can) is not my idea of GA…

A great story. I think most of us have experienced these emotions and the frustration of the wait.

In situations like this, I usually fly. Maybe not to my destination but I fly. There are so many options what you can do in flight and if it’s necessary I will land somewhere else and stay there. In summer, there’s always an option to get through, maybe not at the originally planned time but then later during the day.

The picture from Straubing shows that Hemmel needs an excavator to move his money from the avionics shop into his car every evening. Looks like it’s the last avionics shop in Europe

never cancel any flight (no matter how bad it looks) two days in advance.

I agree; the man-generated wx forecasts (tafs/metars) are pessimistic nearly all the time, and the horrible-looking fronts showing on the MSLP charts are often non-events (if the general pressure is high, especially if there is a low pressure gradient).

One should never cancel until one sees the metars, the tafs, and the IR image.

But sometimes a cancellation is a good decision – e.g.

Great writeup @Petakas! I would have made the same decision in your situation. Otherwise, I would have gone on the basis of the IR image but IMHO the tops over Austria 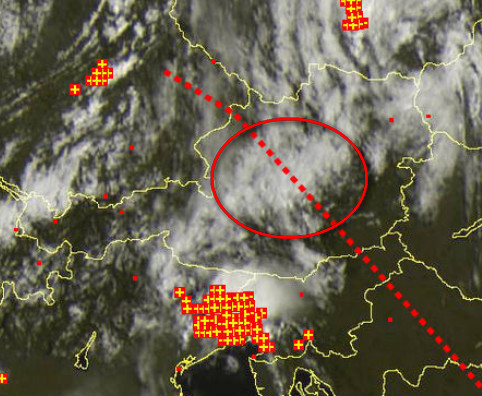 Also that area of IMC is fairly big and I will no longer do IMC around -15C due to this. The protection from that should be propeller TKS and the bottle lasts only about 2hrs…

In Sep 2014 we got fuel faster at LGKR than we could get out of the aircraft, so it is variable and probably depends on other traffic wanting fuel. I would think they multi-role the avgas crew because there isn’t much avgas traffic there. You could get the same wait in France during a 1-2hr lunch break, at an empty airport.

The picture from Straubing shows that Hemmel needs an excavator to move his money from the avionics shop into his car every evening. Looks like it’s the last avionics shop in Europe

Hence my comment posted earlier, about which pilot populations are most over a barrel, with Greeks at the top of the list.

There are other good shops around but Straubing seem to have very good PR.

Is there no decent avionics shop in say Slovenia? Lots of GA there…

It was a good decision because you are safe and happy; you got the aircraft delivered later anyway so it didn’t matter.


Hence my comment posted earlier, about which pilot populations are most over a barrel, with Greeks at the top of the list.

Pilots in Egypt like to go to Cyprus for maintenance and avionics, I assume that is also an option for Greek pilots but Germany is probably cheaper.

There are other good shops around but Straubing seem to have very good PR.

You mean the one that did your TAS? I don’t know anything in Europe that is comparable to Straubing. Everybody can connect a GTN but when things don’t work for some reason, then you need to have real specialists and all the test gear and documentation for the most obscure boxes found in aircraft. I learned it the hard way, went to a good avionics outfit but when the DME didn’t always tune like it should, they spent hours of erratic trial and error while in Straubing they opened the DME, took the circuit plan and had the problem fixed in 45 min. If something requires a more involved fix, they just give me a free loaner device from their large collection. They could charge 3x the hourly rate and would still be cheaper. In this business size, equipment and experience matters a lot.


Lesson: never cancel any flight (no matter how bad it looks) two days in advance.

Depends on the situation imho.

If the aircraft is the reason to fly, as here delivery to maintenance, maybe. If you need to be there, 2 days is reasonable as you need to arrange alternative travel. The closer the date, the more expensive it gets.

Crossing the Alps in this kind of IMC in a SEP without deicing is no go in my opinion. Also, any flight which has the Alps involved faces a 70% cancellation rate in VFR, maybe 50% with non-FIKI IFR. To be put under such pressure by a shop to deliver the airplane so they can get your money is unacceptable.

Also: If you are not happy with a situation, no matter which, it is always better to cancel.

I think you do have a special relationship with that shop, Achim. Probably for several reasons.

A TAS605 installation is simple once you know what is involved (anybody who can read and solder can do it) but most small shops can’t do it – their main business is throwing in GNS430s, transponders, etc. There are also a few tricks which need to be done just right e.g. antenna grounding. Also the shop ends up removing a lot of interior trim which provides ample opportunity for stripping threads… which won’t be discovered till years later.

The funny thing is that one clever guy, especially a clever electronics engineer (i.e. not just a wireman like ~95% of avionics people are) could do everything in GA while sleeping. So why is there such a shortage of apparently reputable shops? How many people are there in Greece who know electronics?

I think the answer lies in the European system, currently Part M, which is a great “support system” for companies with the approvals. If you were N-reg, you could source the kit (anything with an AML STC, to keep things simple) from the USA, get a good freelancer to install it, get an A&P/IA to inspect it and sign off the 337, and you could do it all inside a Greek hangar.

Peter
Administrator
Shoreham EGKA, United Kingdom
22 Posts
This thread is locked. This means you can't add a response.
Sign in to add your message