The Hurricane was in a field and maybe hurt a sheep.

Display pilots, especially ones with the background that is implied in this case here, are completely aware of any performance factors that are relevant for low maneuvering and aerobatics – there are entry gates (target height and speed etc) for starting a maneuver like this, high energy gates to ensure that you are actually in a position to pull out in time, and so on.

So I would expect this was some form of technical glitch, but obviously we’ll have to wait for whatever the investigations come up with.

I think that it’s (one of the few ..) signs of evolution that in many places today we don’t accept high risks anymore. One human life is worth more than a million airshows. Period.

We do accept very high risk every day.
I don’t think an air show is ‘high risk’.
Probably most GA pilots are high risk. I know a few pilots with a DA and they train more than an average pilot flies. So what is the higher risk?

There are accidents. Period. Every day is a risk.
Accidents will happen again. There is a next airshow plane to crash, another airliner to fall out of the sky, another bin lorry to drive into people and another car crashing this very minute.


Tragedies like this one will NOT (!) improve the image of airshows and everything possible has to be done to prevent them.

No matter how tragic such tragedies are, it’s this “everything possible” that is the problem. In principle I sort of agree, a third party should not need to worry about getting a fighter jet from an air show in the head while driving on a weekend trip. Things aren’t that simple though. Is there really a difference if you are killed in a collision with the fuel truck that delivers fuel to the Hunter, or is killed by the Hunter itself? You could also be killed in a collision with a family car full of children that are going to the air show. All these deaths would be just as tragic, and the cause would be the air show. All statistics show that the latter accident is what people should worry about (if at all). Would it somehow make things better if the children were not going to the airshow, but to the beach? The chance of being hit by a fighter jet at a nearby air show must be infinitesimal, about as much as being hit by the very first lightning in a thunderstorm or something. Has this ever happened before? These are people outside the airshow itself. This is a freak accident, as freak as it gets, and clearly nothing to worry about for anyone.

A few years back when my children went to 1-7 grade, statistics showed that an increasing number of children were involved in car accidents when going to-from school. Therefore parents started to drive their children in increasing numbers, not just the few over protective parents afraid of the sky falling down. There were lots of talk in the media how to make safer roads, and in particular what was going on in the head of the drivers. Didn’t they know these particular roads were full of children at particular hours ? didn’t they care? But even though more parents drove their children, the accident rates increased. The police started doing closer examinations, and very soon found that the reason more children were involved in accidents were exclusively caused by more parents driving their children. Essentially stressed up and worried moms, hurrying to get to work after having delivered their children “safely” at school was the reason. The teachers started informing about this, and schools would not accept parents driving their children (they should walk, cycle or take the bus), and this has not been a problem ever since. OK, maybe hardly related to the Hunter accident, but it does show that fear does not solve anything, and being afraid is not the same as taking a risk. “Public fear” is in most cases just that, unsubstantiated fear, hysteria more or less.

I do no not agree. While i can accept the risks of life, otherwise i would not fly small airplanes for sure, I have a hard time accepting that the people on that road had to be exposed to that risk. It could and should have been avoided.

Also: What’s the point in our more or less philosophical discussion here if the general (stupid as a mass) public decides to end all airshows?

Is there really a difference if you are killed in a collision with the fuel truck that delivers fuel to the Hunter, or is killed by the Hunter itself?

That’s not the question. The question is: Do we do everything possible to minimize risk? It looks like the Hunter crash was really a very tragic coincedence, but many other times the risks that were accepted were simply too high.

The much better awareness for risks in traffic have saved many thousand lives in the last decades. And there’s still room for improvement, in airshows as well.


The question is: Do we do everything possible to minimize risk?

I surely hope not – because that would mean not leaving your bed-livingroom-treadmill-in-a-concrete-bunker ever again, because whenever you actually do something, you incur risk (which it would be possible to minimize by not doing anything any more). We as a society are going in that direction already…

Do we do everything sensible to minimize risk? Impossible question, everyone’s got their own opinion on what a sensible level of risk is, which also is dynamic, depending on how much fun/reward a person is currently having doing something objectively risky. If it were different, no one would be riding a motorbike, which is risky in a very bad way – many of the incidents the rider can’t avoid a crash, simply because someone else wasn’t keeping his eyes open. So for example, I personally would never ride a motorbike, while I find the (in my opinion more directly manageable) risk of flying a small airplane much more acceptable.


The question is: Do we do everything possible to minimize risk?

Everything possible means to stop the activity. Only then you really minimize the risk.

I saw an excellent post in another forum today, not much to be added.

There was another accident today at an airshow in Switzerland, two microlights colliding, one pilot unfortunately killed. I am sure there will be calls to ban this show.

If you sincerely think like that Alexis, the only consequence to minimize the risk of flying you apparently find so unacceptable is to ground yourself. Only then will you be absolutely sure that nobody will ever come to grief due to your pleasure flying. 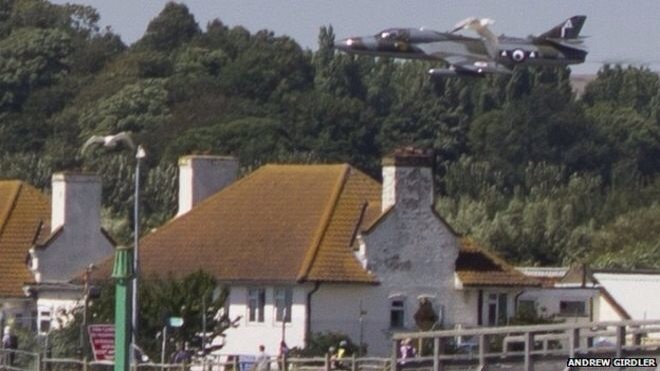 Could this have been a bird strike? There have been high concentrations of birds at the airfield recently and the airport have been scaring them off with sound and vehicles. When I was coming back from Versailles a couple or weeks ago I was warned about birds on the approach.

This photo shows two seagulls very close to the plane. I can recall seeing a ’burst" of flame coming from the jet before it went into the ground.

If you sincerely think like that Alexis, the only consequence to minimize the risk of flying you apparently find so unacceptable is to ground yourself.

That’s really trying to manipulate what I said. I did not say nor did i write that I find the risk of flying unacceptable for myself. I have also never said that I i find the general risk of life unacceptable. Read again. There’s also a lot of room between my flying and the demo of an antique military jet.

It doesn’t look like a lot of (or indeed any) engine power would have been needed at the point this started to go wrong. Can anyone with aerobatic knowledge comment?

I’ve just received an email from the airport management that runway 02/20 is closed. Presumably so are the IAPs unless one does a circling approach.

Peter
Administrator
Shoreham EGKA, United Kingdom
375 Posts
This thread is locked. This means you can't add a response.
Sign in to add your message