Is this the lowest and highest pressure ever in/near Europe?

I agree with most of the above (except the reductio ad absurdum lynch mob, obviously). Disagree with @Noe that it increases the chance of taking off with the wrong QNH set, as it at least makes you consider the altimeter setting. Anyway, the IR training was very hot on altimetry checks, for good reason, so that is cross-checked twice before takeoff in my checklist, once on setting it immediately after receiving ATIS and once before entering the runway.

(Incidentally, and to stoke up more forum mockery of the UK system, my IR checklist had to have documented altimeter setting procedures i.e. what settings to use on takeoff, enroute, and arrival. And I was expected to adhere to those procedures during the skills test. So mine makes no mention of RPS, it just says primary on QNH/1013 as appropriate for cleared altitude/level, standby always on QNH. And I do think this is OTT documentation, FWIW).

Back to the debate about overzealous checks in training – what’s unusual is that my IR instructor was vehemently against pointlessness in any form (to the extent of fighting painful battles with the CAA over their overzealous requirements while getting his ATO approval). So it would be out of character for him to ignore this ‘pointless’ check when he picked me up on countless others throughout my training.

As an example, he would pick me up for bothering with fuel drain checks when my a/c has perfectly good seals and has been hangared all night at home base where the roof doesn’t leak. If there isn’t a puddle on the floor, he argued, it’s a pretty safe bet that the fuel state is how it was when it was hangared. Now I have had debates about this with other pilots who are outraged by this, but my instructor was making the point that you should consider each check rather than performing by rote. If the a/c was outside and it had been raining all night, of course I’d do the fuel drain check.

I also went to the trouble of re-writing my checklist several times during the IR training, sometimes for ergonomic reasons, sometimes to prune out any chaff. Point being that the accusations of unthinking rote drills are pretty far from the truth – I’ve re-assessed my checks countless times. Now my checklist only says “check instruments” on this point, but I am genuinely interested in why this check was never criticised by Jim when just about everything else I did was :)

Rich, no-one is taking the p*ss out of you – it is the British system of introducing often odd procedures that perhaps had some meaning or purpose in the 40s to modern IFR flight. When you were taught this, what failure mode did your instructor tell you was it intended to check?


…and to stoke up more forum mockery of the UK system, my IR checklist had to have documented altimeter setting procedures…

Now this is one which is not UK specific. For as long as I fly IFR (27 years) every “organisation”, being FTO or commercial operator, had to have it’s own procedures for altimeter setting, documented in it’s training/operating manuals and approved by the authority. This has not changed much between national regulations and later JAR and now EASA. Only private operators can set their altimeter as they like (observing of course the ICAO standards).

And Rich, also from me: Nobody is making fun of you personally! Myself I have trained in Germany, the States and the UK for many years (still go to the UK twice per year for recurrent training) and by now thought that I must have come across every silly way to operate an aeroplane. So whenever someone comes up with a novel way of doing things that everyboby else either does not at all or in a simple and straightforward manner, a certain degree of amusement (and incredulity) will result.

@JasonC, when I was taught it, ab initio, it wasn’t explained what the check was for, except “working correctly”, and at the time I was taking too much else in to enquire further. I can’t think of a specific failure mode that it checks for, except perhaps stiction, and this thread has made me question it for the first time. Hence my surprise, because I’d have expected my instructor to have questioned it, if it were pointless.

I wasn’t feeling personally affronted, what piqued me was the criticism of my instruction, which I happen to think was excellent. I find it ironic that a criticism of unthinking practice should itself be done by way of unthinking generalisations. I know there are lots of “it’s been done this way since the days of the RFC” instructors out there, and I’ve met a few, but I honestly don’t think my main instructors (both PPL and especially IR) would fall into that category. My own standard of flying and bad habits are in no way a fair reflection of their qualities, though I’m certainly a better pilot than I would have been without their help and expertise.


I wonder where this is coming from. Surely every High needs a Low, because the Low is sucking air up into the sky and it gets dumped where the High is?

Surely it’s the other way around? The pressure on the ground is the weight of atmosphere above you, so the atmosphere is higher where there’s a high pressure, and the high will be trying to fill up the shallower bits of the atmosphere where the low is.


I wasn’t feeling personally affronted, what piqued me was the criticism of my instruction, which I happen to think was excellent. I find it ironic that a criticism of unthinking practice should itself be done by way of unthinking generalisations.

Sure but instructors teach to the test and if British examiners are asking for it there is not much an instructor can do. Certainly in Australia or the US I have never heard of this being done.

It is mentioned here but not explained. https://askcaptainjonspplhelp.wordpress.com/tag/pre-flight-checks/

High and Low only apply at the surface, at altitude this is the other way round – it has to be for circulation to work.

You can think of the atmospheric (vertical) circulation the following way:

Of course the above is highly idealised – but together with the temperature gradients it explains why we have lots of lows at our latitudes (the polar front / north atlantic lows), why the continents have stable highs in the winter (its cold!), or that an extended period of high pressure over the atlantic is highly unusual… 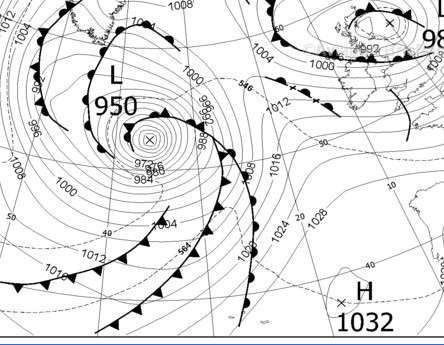 Explosive cyclogensis (aka a weather bomb, or bombogenesis)

What’s the pressure inside a hurricane ? Does anyone have charts re. the recent ones ? Is the one in your chart the residual of one ?

EuroFlyer
EDLN, Germany
108 Posts
This thread is locked. This means you can't add a response.
Sign in to add your message