According to this you can put the Garmin Safe Taxi on it so that’s one really good use. That is one issue which I find repeatedly to be a real problem. You can get current enough to fly a plane etc but getting lost at new airports is normal.

Also the Jepp approach plates were designed for 800×600 and work really well at that and at anything higher. I know somebody who succeeded in getting them on the 695/696 but it took him ages (with useless Jepp support) and initially he ended up with them in some useless low resolution.

The Ipad programs obtain some data from non-AIP sources (e.g. unofficial databases of ultralight airfields and farm strips) and probably these won’t be on the Garmins. But the official VRPs should all be on there – I did check that in a pilot shop that a few years ago for my VFR in Europe presentation (under Articles).

Safe taxi works on the 696 and I agree, taxiing can be a bigger deal than flying from point A to B at a bigger airport, especially at night.

You can get AIP and Jepp plates on the 695. Personally, I don’t use this function but if I flew more, I might consider it.

Here are some screenshots from the 695.

This is the SafeTaxi airfield diagram for Southend EGMC. One can zoom in to get more detail. The red oval is a hotspot for incursions – it’s also in the AIP. If I had done this in the aircraft it would have displayed own-ship position as well as a breadcrumb trail. 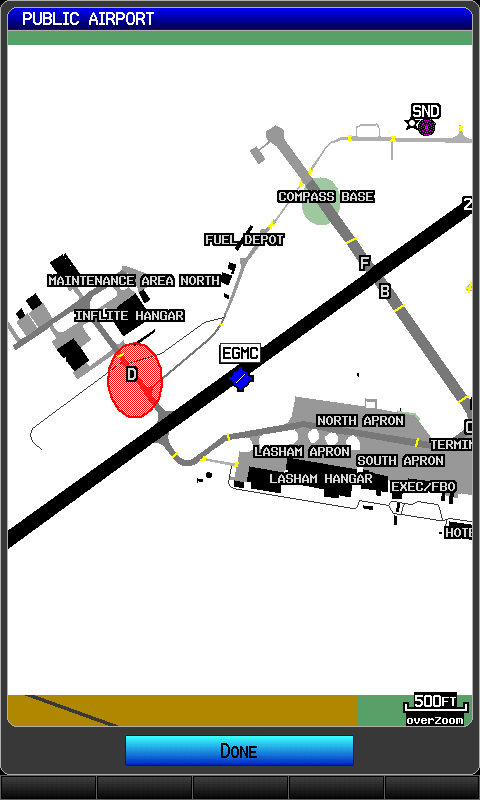 And here are low and high IFR en-route charts for the same area: 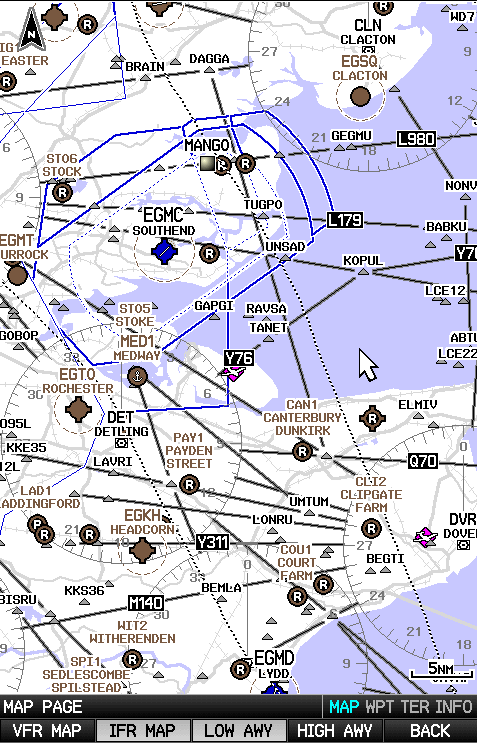 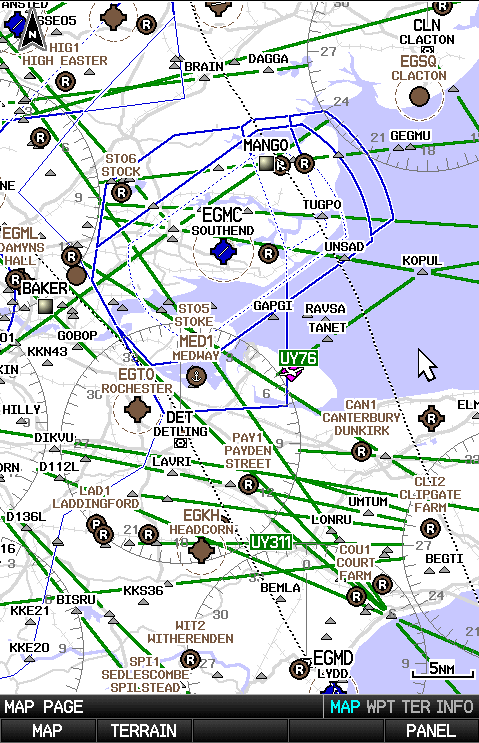 And the VFR chart (smaller area), which I imagine is very similar to the presentation in Garmin Pilot. Note the VRPs with green diamond marks. The 695 is highly configurable regarding what to display and at what size to display it to suit ones own preferences and furthermore there is an instant declutter option (4 levels) to remove unwanted information – this is especially useful on the VFR map. 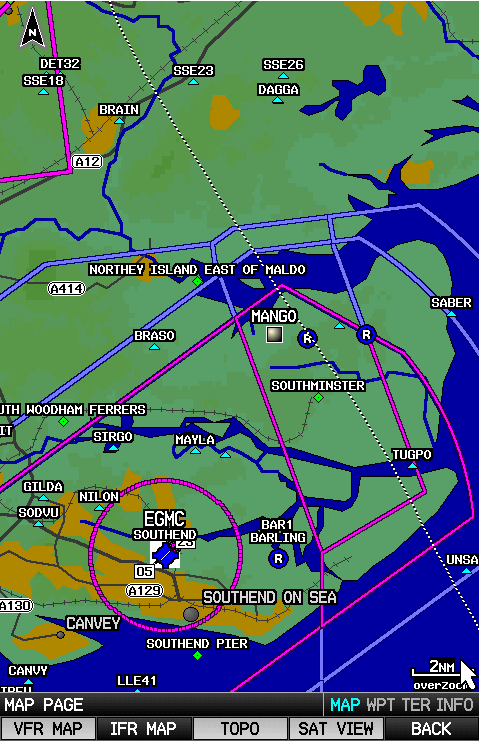 
And the VFR chart (smaller area), which I imagine is very similar to the presentation in Garmin Pilot.

Actually not. That’s one reason I don’t use Garmin Pilot: airspace is not colour-coded, so it is hard-to-impossible to know what that area is just by looking. Is it Controlled Air Space? Is it a Danger Area? A forbidden area? On my Garmin Aera 795 is see it, not in Garmin Pilot.

We’ve pretty much added a Garmin Aera 660 to every aircraft in our flying club’s fleet, either as a backup or primary navigation screen. The 660 was very well received by our members and some even use them for pre-flight purposes. On longer cross country trips I even load my FPL from Garmin Pilot into it to have a backup in case my iPad overheats. The syncing works pretty much out of the box :)

That new 760 might be a little bit too big for many smaller cockpits (it looks bigger than the 660), but will give it a try sooner or later.

What surprises me – as per further back in this thread – is that Garmin find it worth making these, at the much lower volumes.

Or maybe the volumes are not that much lower but instead the GA media has been swept up in the “Ipad revolution” and thinks that everything else is dead, while those who don’t follow the crowd are happily buying these dedicated boxes which, as the above video shows, have a vastly better display in sunlight. They also have a vastly more reliable GPS. And they are vastly more foolproof, with dedicated buttons doing dedicated things, rather than the messy user interfaces on tablet apps which are crammed with features.

I’ve had an Aera 660 in the yoke for several years and find it brilliant. I have the Garmin Safetaxi on it. It “just works” and keeps working, with no funny business, no apps broken because they have been updated, or broken because they got updated but need a later version of the OS, etc. It does a very accurate and reliable GPWS function which is wired directly to the intercom.

If I was going to do this any other way I would buy an old Iphone, yoke mount it, and have it running Foreflight. From demos I have seen it does GPWS well, plus some other nice features. It should work ok if one doesn’t interact with it.

The 760 would be too big to yoke mount in many cases.

Can you view frequencies for upcoming TMAs and CTRs?
Can you view airspace established using NOTAMs?
Can you display traffic using an external receiver?

1) No idea but these potentially vary all the time, don’t they? Or, as in the UK, they are either unpublished or you can’t tell who the owner is, or the owner doesn’t provide a service to VFR anyway.
2) Obviously not unless there is internet access, which needs a SIM card (in the general case)
3) Yes; to some extent, but only participating traffic (the usual debate of how many use this or that box).

1) You have to update your device every 28 days (AIRAC / menstrual cycle) because airspace also varies over time. Thus frequency updates should not be a problem. It is not for requesting a service. The essential need to know the TMA frequency for VFR is to request clearance to enter / transit the airspace.
2) You must have internet access on the ground during the planning phase, right? That’s when you get the NOTAMs.
3) That’s great!

Dimme
ESME, ESMS, ESOW
85 Posts
This thread is locked. This means you can't add a response.
Sign in to add your message